During the 2016 season, the National Football League fined players for modifying their uniforms to honor the 15th anniversary of the 9-11 attacks.

The National Football League (NFL) found itself with a public relations crisis during the 2016 season, as its rules against modifying uniforms ran up against some players’ desire to mark the 15th anniversary of the 9-11 attacks.

Avery Williamson, a linebacker for the Tennessee Titans, told reporters that the league threatened to fine him for wearing special cleats for the season opener that year, slated for September 11 2001. According to the Nashville Tennessean:

“I don’t want to draw negative attention, so I’m just going to focus on playing the game,” Williamson told The Tennessean on Friday. “Once I heard from them, I didn’t even try to argue anything. I just left it alone. I didn’t want to press the issue.”

The star-spangled blue cleats with red- and white-striped Nike swooshes were airbrushed by True Blue Customs in Lexington, Ky. They feature the words “Never Forget” and “9/11” on the back of each shoe, with the “11” representing the Twin Towers. The NFL mandates all teammates wear the same color scheme on their shoes. 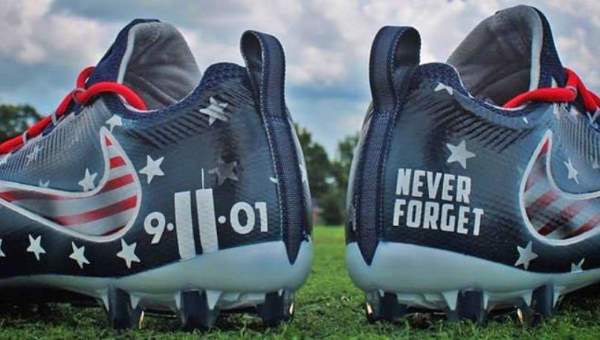 As the Washington Post reported, the threat against Williamson was not unique; the NFL had previously fined DeAngelo Williams of the Pittsburgh Stelers, for example, for applying the phrase “FIND THE CURE” in black ink under his eyes in honor of his mother, who died from breast cancer, during Breast Cancer Awareness Month.

The league’s policy on “personal messages” on uniforms officially states:

Players are prohibited from wearing, displaying, or otherwise conveying personal messages either in writing or illustration, unless such message has been approved in advance by the League office. Items to celebrate anniversaries or memorable events, or to honor or commemorate individuals, such as helmet decals, and arm bands and jersey patches on players’ uniforms, are prohibited unless approved in advance by the League office.

Williamson released a statement before the game saying that rather than wearing the special cleats, he would make them available for purchase in an auction benefitting the charity Operation Warrior Wishes. However, he wore the cleats for the game after all.

He was not alone; Odell Beckham Jr. and Victor Cruz, who at the time were wide receivers for the New York Giants, also wore special cleats for their September 11 opener, reportedly daring the league to fine them as well:

But the NFL did not, in fact, fine any of the players for the special touches to their uniforms. A league spokesperson told USA Today that the decision tracked with league policy allowing players to recognize the 10th anniversary of the attacks during the 2011 season.