On November 1 2019, a Facebook user shared the following screenshot, which included a purported photograph of former United States President Barack Obama bowing deeply to an unidentified man in a turban:

In a solitary comment on the post, the user claimed they had “to copy and add as a photo, and “couldn’t even paste it,” insinuating the image was censored on Facebook. Text on the image which appeared to be part of an original post read:

No Islam. Not in America. Not on my watch. This was blocked sharing on my friends page.

Never before has a sitting president bowed to a terrorist leader.

The image was not new in November 2019; a reverse image search showed that it had appeared as early as 2013. Early iterations of the image displayed additional evidence of doctoring, including a large “Mission Accomplished” banner above President Obama and the other man. However, in true disinformation fashion, many of those early results were defunct links as of December 2019: 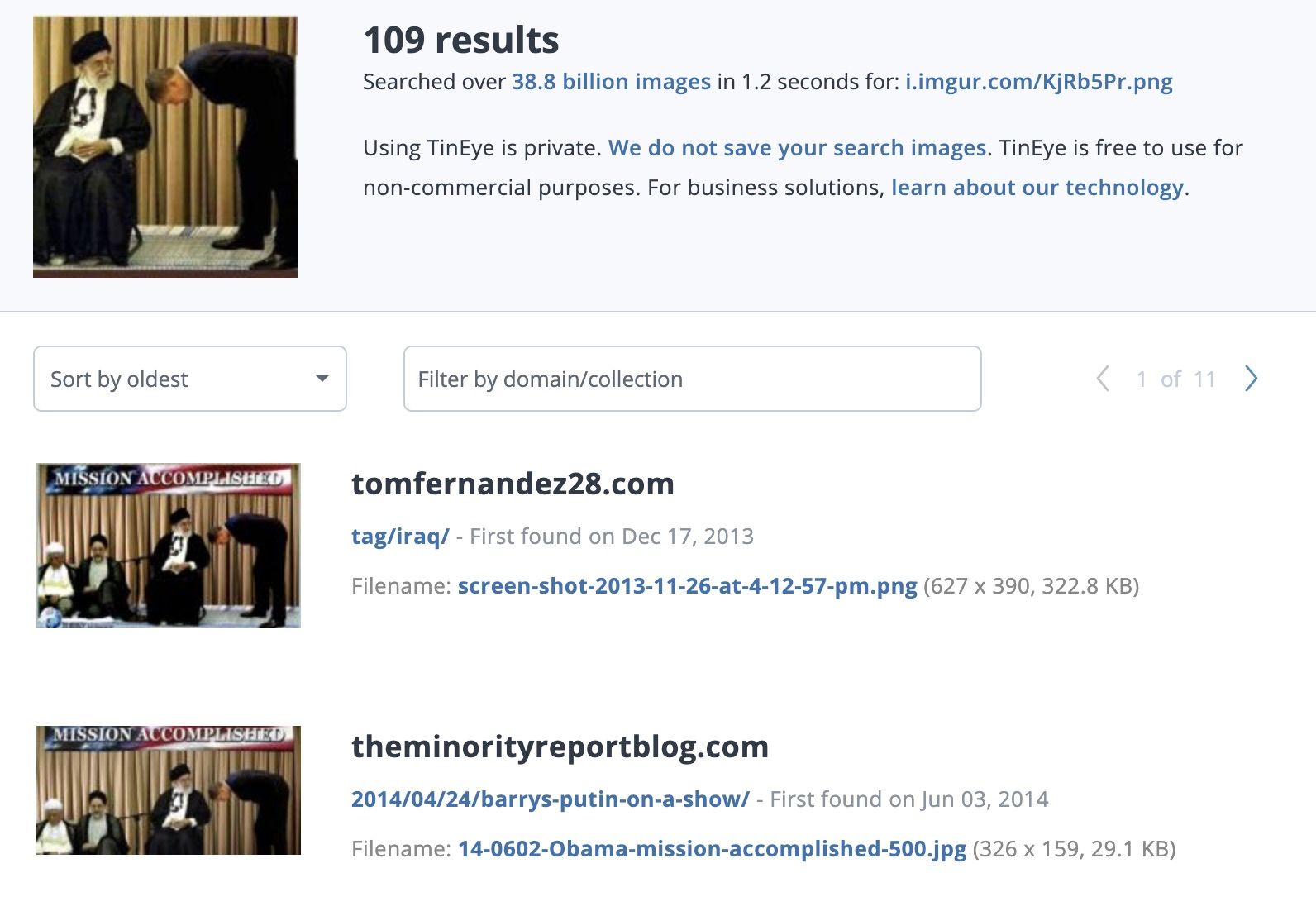 A version of the image appeared in the comments of a blog post published in September 2015. That commenter claimed Obama “didn’t bow to the Queen of England, a reverent defined gesture but bows to the Iatola Khomeini, the same man who preaches to kill Americans”: 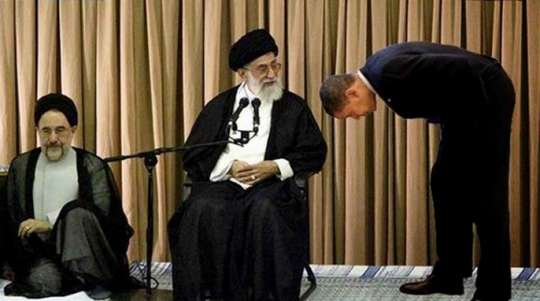 That blogger claimed that the image showed Obama bowing to Ayatollah Khamenei, and whatever supposedly precipitated the bow would have to have taken place during or before 2013. However, in the image, President Obama’s feet seem to float oddly on the carpet, and his overall height made the seated man appear to be ludicrously tall.

As it turns out, the image does show Ayatollah Khamenei — but in 2005, three years before Barack Obama was elected as president. That photograph appears on Getty Images and is dated August 2005:

A reverse image search for the photograph of Obama in that specific pose (purportedly bowing) returned an interesting result. Google located the actual photograph, but automatically suggested a “Possible related search: obama bowing to ayatollah”:

The photograph of Obama “bowing” went viral in its own right, as it was widely broadcast and shared when it was first captured in the Oval Office in 2009. It did not, of course, originally show U.S. President Barack Obama bowing to any foreign leader; instead, he was showing deference to a small boy who wished to touch his hair:

A second, tacit claim in the “no Islam, not in America, not on my watch” post was that Facebook was suppressing the spread of an image depicting Obama bowing to a “terrorist.” In actuality, Facebook fact-checking partner PolitiFact went over the faked photograph in May 2019 based on a version of it that was circulating at that time.

Consequently, that May 2019 post (and other versions of the same photograph) were covered with “False Information” and “Checked by independent fact-checkers” labels appended by Facebook on content deemed false: 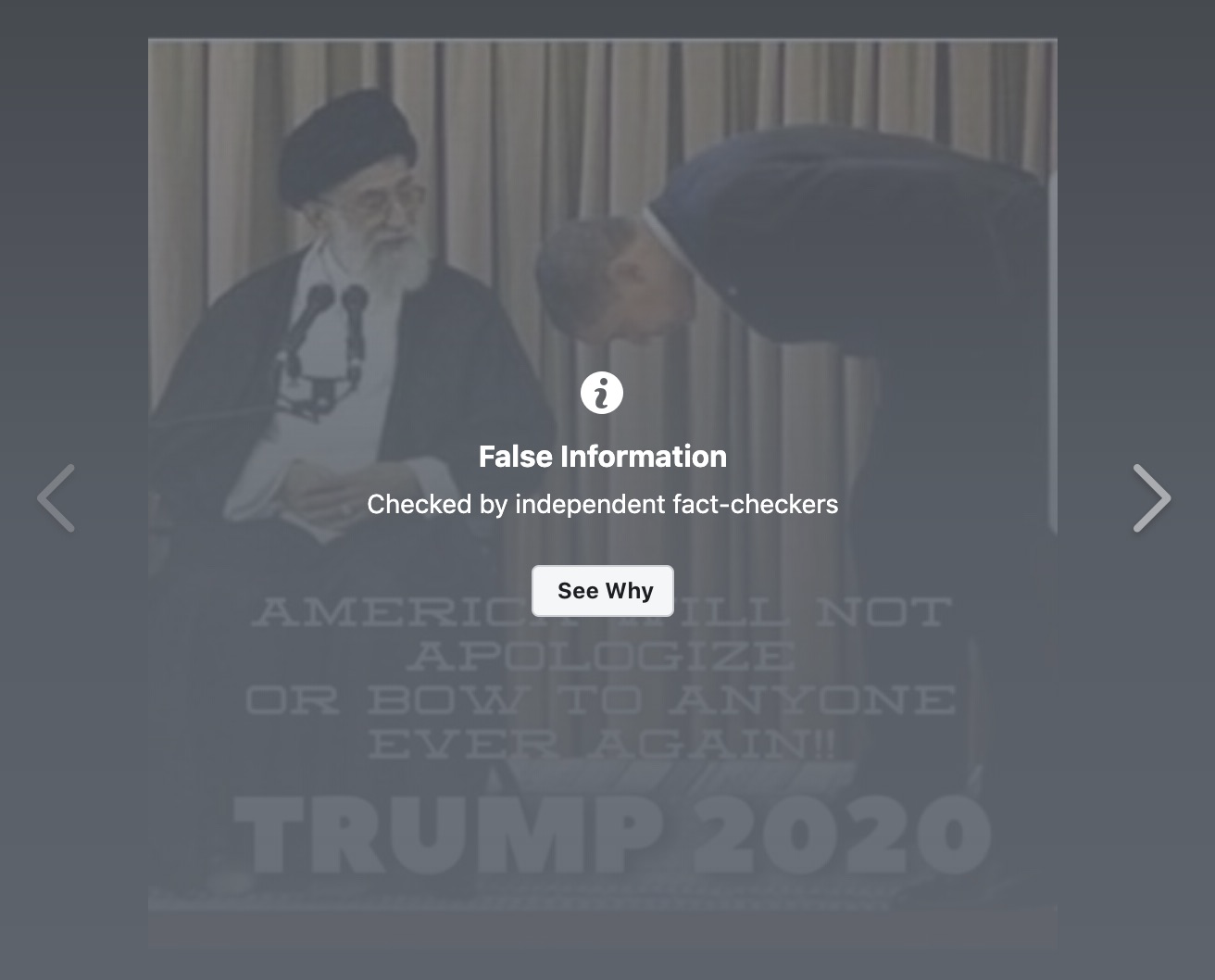 In order to test the November 2019 post sharer’s claim, we clicked on the “share” button in an attempt to determine whether Facebook had prohibited sharing of the image. For us, it hadn’t — but a pop-up notification appeared to inform us that any shares of the image would bear the same “False Information” and “Checked by independent fact-checkers” label that had been inaccurately described as “censorship,” in a clear attempt to weaponize Facebook’s admittedly minor efforts to limit the spread of hoaxes and disinformation: 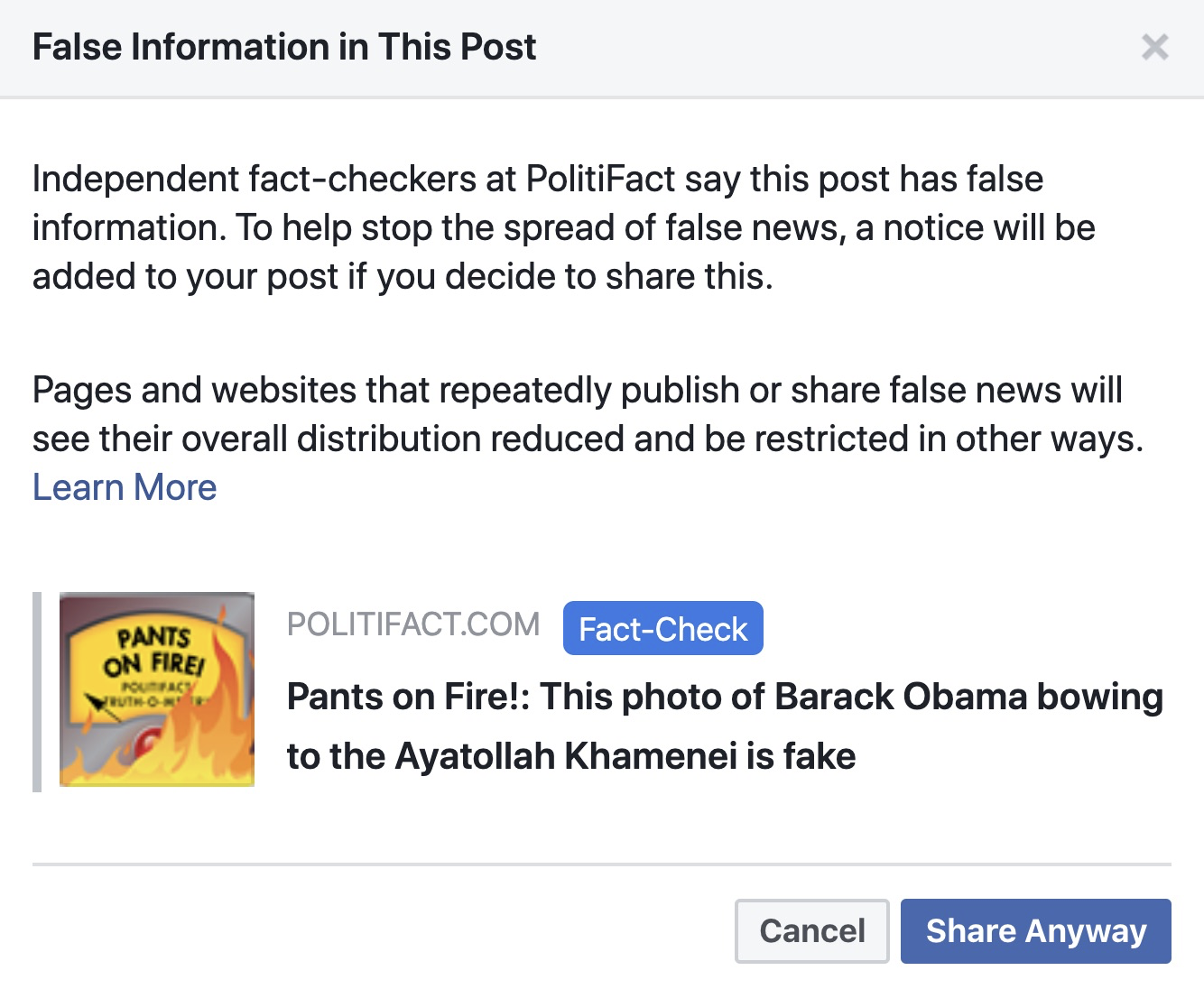 A widespread November 2019 post purporting to be a photograph of former United States President Barack Obama “bowing to a terrorist” was completely doctored, then cropped to remove elements making clear it was edited. The photograph combined a 2005 photograph of Ayatollah Khamenei in Iran and a 2009 Oval Office photograph of Obama kneeling to allow a small boy to touch his hair. A secondary claim that Facebook had “blocked” the photograph appeared to be, in actuality, the above-shown “False Information” flag — but, as is easily demonstrated by attempting to share the post, users kept the option to “Share Anyway.”