Amazon's Whole Foods asks customers to buy food and donate it in store, but the company paid no taxes on more than USD$10 billion in profit in 2018.

A December 2 2019 Facebook status update excoriating Amazon and Whole Foods over a purported holiday food drive (and advising customers to move unpurchased items to the “donations” section) struck a chord and racked up tens of thousands of shares in just a few days:

The post was also shared by “The Other 98%,” racking up still more engagement. In the text-only status update (one of several claims about Bezos, Amazon, and Whole Foods), the user wrote in full:

I was at Whole Foods yesterday, which is owned by Amazon, which paid $0 in income taxes on $11 Billion in profits in 2018, and which is operated by Jeff Bezos, who is worth roughly $112 Billion, making him the wealthiest man in the world.

The reason that I mention this is that Whole Foods was having a holiday food drive and had the absolutely ludicrous fucking audacity to suggest that I purchase food from them so I could then give it back to them so that they could use it to feed hungry families during the holidays. In essence, a man who is worth more money than the average human would earn in 45,000 lifetimes asked me to give him $5 so that hungry children could have crackers because it is essential that he profit before hungry people eat.

Whole Foods and Jeff Bezos should not need me to broker this transaction, but since they asked, I solved the problem that they are either too stupid or too selfish to solve on their own by walking through the aisles, grabbing armfuls of food and depositing it in the donation bins. You’re fucking welcome.

It’s really a zero-risk maneuver, as you haven’t stolen anything, simply placed items in a different location in the store, and in the unlikely event that you are confronted by an overworked and underpaid Whole Foods employee, you can ask them to try to sort your contribution out of the donation bin by figuring out the exact point when they are taking food out of the mouths of hungry children and when they are taking money out of the pocket of the man who accumulated that money by underpaying and overworking his employees.

I will be doing this on every visit to Whole Foods throughout the holidays and hope that all of you do the same. Happy Holidays.

That user made several assertions, which we will attempt to cover below. The first four were straightforward and checkable:

The fifth was a bit outside of fact-checking territory, but an assertion all the same:

Several editorial points were mixed in as well. In one, the user opined that Whole Foods’ failure to simply give food to needy families — instead, demanding that customers bankroll their donations — was stunning avarice from a company making money hand over fist while not paying taxes.

Another point exhorted putative shoppers if “confronted by an overworked and underpaid Whole Foods employee” to ask them “to try to sort your contribution out of the donation bin by figuring out the exact point when they are taking food out of the mouths of hungry children and when they are taking money out of the pocket of the man who accumulated that money by underpaying and overworking his employees.”

Whether the points raised in those elements were nuanced and philosophical or purely mathematical was also, perhaps, a matter of opinion.

Many of the post’s claims were in fact checkable, however, and some we have already addressed in previous articles. The first, that Amazon owned Whole Foods and Jeff Bezos was Amazon’s chief executive officer, were addressed in a fact check about an announcement Whole Foods would be eliminating benefits for part-time workers at the start of 2020.

Amazon’s total profit for 2018 topped $10 billion for the first time in the company’s history, fueled in part by continued momentum for its higher-margin cloud computing service and its nascent advertising business.

Point three was that Bezos had a net worth of $112 billion. On our page about the value of Bezos’ donation to homelessness charities, we consulted Forbes‘ real-time net worth tracker for its listed billionaires. As of December 4 2019 (two days after the post was published), Bezos’ estimated net worth was listed at $111.1 billion, off by less than one billion of more than $110 billion: 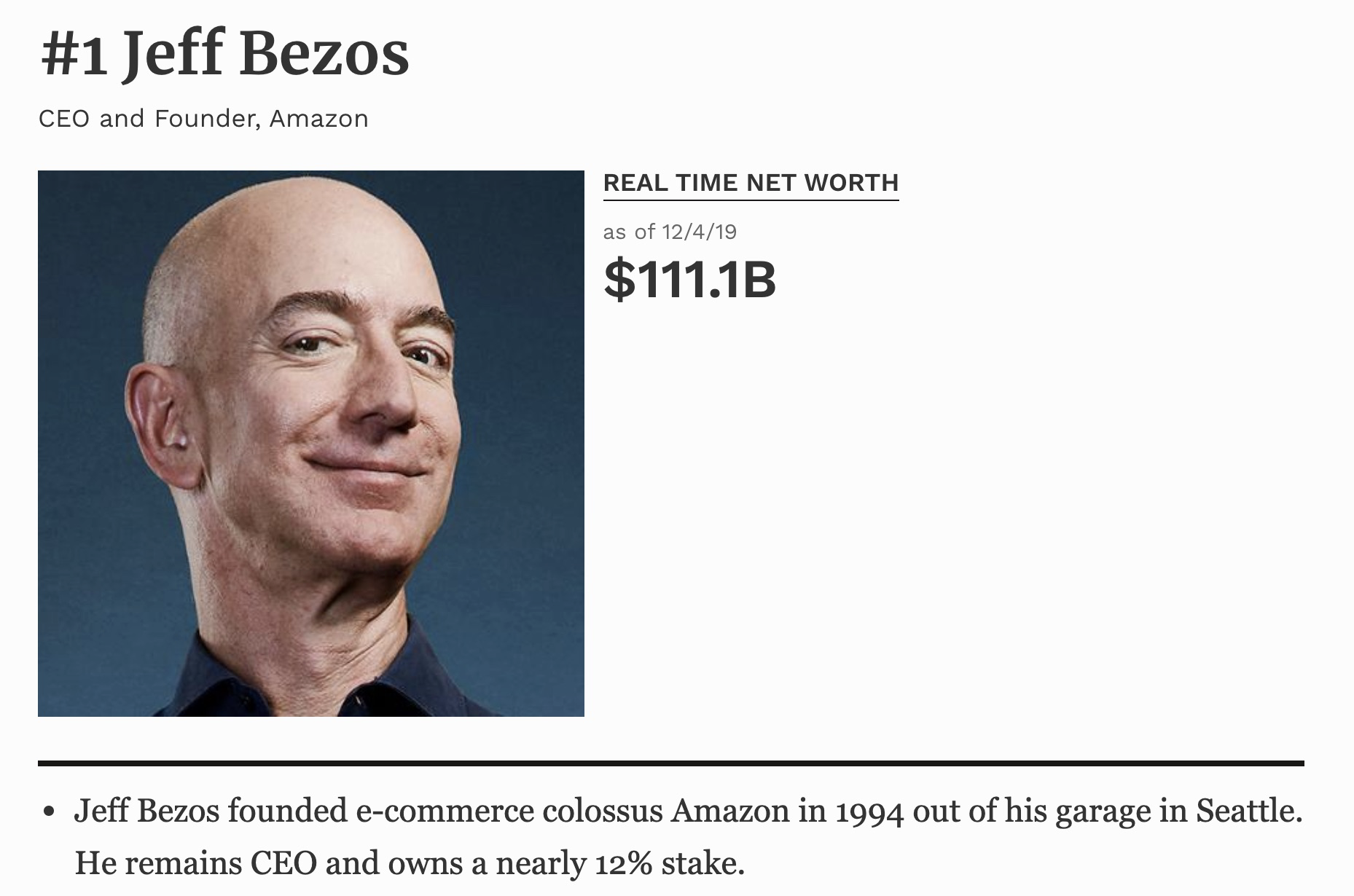 Point four was that Whole Foods hosted a holiday food drive in 2019. According to the post, Whole Foods’ efforts consisted of pressuring shoppers into purchasing food from Whole Foods, then leaving it at the store for needy families.

We were able to locate at least two individual store events matching the description in the user’s post. A Whole Foods in Overland, Kansas advertised a “Grab & Give Holiday Food Drive,” which seemed to involve shoppers donating monetary sums when paying for their groceries:

You can help feed a local family with all natural foods this holiday season with a $5 breakfast, $10 lunch or dinner donated at the Whole Foods Market registers … The holiday food drive is known as “Grab & Give” and runs from November 1st through January 1st. Our goal this year is to raise $100,000 in food donations at this location.

A previous event held by a Whole Foods in Portland more closely matched the user’s reported experience, and customers were asked to buy Whole Foods items and leave them at the store:

This holiday season help alleviate food insecurity for families by purchasing non-perishable food to be donated to Wayside Food Programs.

Food donations can be made at food bank centers in San Jose and San Carlos, as well as collection barrels at local Whole Foods Market and Safeway grocery stores.

A food blog mentioned a similar effort at the same Whole Foods in 2014, suggesting that it was a yearly occurrence. Donations of food to food banks also appeared on Whole Foods’ main site under their “community support” banner.

We contacted the Whole Foods in Redwood City to see if the store was hosting a food drive. An employee confirmed that the store was collecting donations of food items for local charities, and that shoppers could also make a monetary donation at checkout.

The post’s fifth and final assertion maintained that shoppers could also move items not purchased into the donations area, “a zero-risk maneuver, as you haven’t stolen anything, simply placed items in a different location in the store.” That particular claim is far less straightforward for a number of reasons — individual stores have different loss prevention policies, it involved laws which may vary between jurisdictions in the same states or across states, and it relied on discretion-based decisions made by both staffers and possibly law enforcement.

According to a California law firm’s site, it seems possible the action advised was not necessarily a “zero-risk maneuver”:

Under California law, the “shopkeeper’s privilege” says that shopkeepers, or store owners or merchants, may detain a customer if they have probable cause that the shopper is guilty of shoplifting (per Penal Code 459.5).

Relevant penal code in California indicated a few things. One was that “probable cause to believe” a shopper was “attempting to unlawfully take or has taken any item from the premises” were sufficient legal grounds to detain the person:

Although the penal code specifies “from the premises,” a significant amount of discretion to classify such behavior is part of the law. Additionally:

In any civil action brought by any person resulting from a detention or arrest by a merchant, it shall be a defense to such action that the merchant detaining or arresting such person had probable cause to believe that the person had stolen or attempted to steal merchandise and that the merchant acted reasonably under all the circumstances.

In short, the merchant (at least in California) is well within their legal rights to detain suspected shoplifters if they had cause to believe the shopper intended to remove unpaid merchandise from the premises. Depending on the location of the food collection site (such as if it were near a door), those actions might cause someone to fall under “reasonable suspicion” of shoplifting.

That same legal code specified “petty theft involving merchandise taken from a merchant’s premises” as the nature of the crime, language appearing to make moving merchandise on the premises without having purchased it technically inside the law. But the same law allowed retailers to detain people on reasonable suspicion of shoplifting, and to exercise a fairly broad amount of discretion in at the very least detaining shoppers.

The law firm’s page provides examples of situations under the law’s purview, a concept dubbed “Shopkeeper’s privilege.” The merchant is legally entitled to “examine any items … he has probable cause to believe were unlawfully taken … and are in plain view, and by law “is authorized to examine the items to determine who legally owns them.” It adds that under Penal Code 495.5, “California law defines ‘shoplifting’ as entering an open business, with the intent to steal merchandise worth $950 or less.”

A legal advice site answering the question of whether shoplifting necessarily involves leaving the store with items not purchased has a broader scope than the state of California posited:

The law — that is, the authorities and the courts — are pragmatic, not dogmatic. If you are doing what any reasonable person would conclude was shoplifting, you can be charged, even if you never succeeded in removing the item from the store. The law, quite simply, does not require that a property crime (for example, theft) be successfully carried out in order to hold you liable — that is, charge you — for it. (Crimes against a person are different: if you tried to murder someone but failed, you would not be guilty of murder, though you would be guilty of attempted murder.) The “technicality” that the item is still in the store will not save you.

A defendant can commit the crime of shoplifting without actually leaving the store. All he need [do] is to move the property and exercise control over it in a way that is inconsistent with the shop owner’s reasonable expectations as to how shoppers will handle merchandise.

To recap, the post made four black-or-white fact-checkable claims:

All four are largely true — Amazon owns Whole Foods, Amazon paid no taxes on over $10 billion in profits for 2018, Jeff Bezos’ real-time net worth in December 2019 was $111.1 billion, and Whole Foods locations ask customers to purchase food and “donate” it at their stores. A fifth claim, that donating merchandise not purchased was a “zero-risk maneuver,” is a bit more complicated, as laws such as “shopkeeper’s privilege” enable staff to exercise discretion in, at the very least, detaining would-be Robin Hoods. But in its entirety, the post was largely accurate in its technical points, and therefore we have ranked it as True.