Obama’s Law Licenses Are In Voluntarily Retired and Inactive Status-Truth!

A forwarded email that says that both Barack and Michelle Obama voluntarily surrendered their law licenses.

The law license of Barack Obama was voluntarily retired and Michelle Obama’s license was voluntarily placed in inactive status according to the Attorney Registration and Disciplinary Commission of the Supreme Court of Illinois (IARDC).  Neither of them are practicing law at this time nor do their present jobs require a law license.   Both records indicate no public record of discipline or pending proceedings and we have not found any evidence of malpractice.

A spokesperson the IlIARDC told TruthOrFiction.com that neither Barack nor Michelle Obama had any history of disciplinary actions. 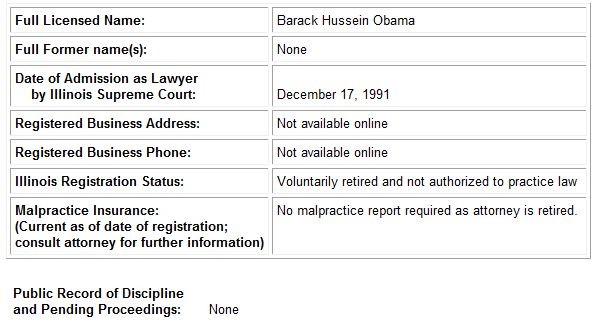