Why No Salute By Obama At Medal Of Honor Ceremony?-Commentary!

This is a forwarded article that asks why President Obama did not salute a medal of honor recipient after decorating him at the White House on November 16, 2010. 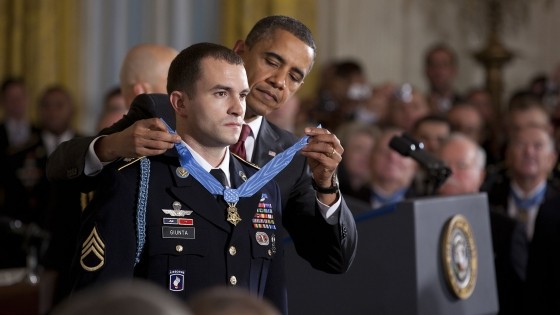 On November 16th President Obama awarded U.S. Army Staff Sergeant Salvatore Giunta with the Medal of Honor for heroism in the field of combat in Afghanistan.  Click for White House release.

This eRumor was based on an article that was written by Reese Lloyd on November 26, 2010 and published on the NewsWithViews web site.  Saluting Medal Of Honor recipients, however, is not mandatory according to a November 18th article in the military news service Stars and Stripes , “Officially, there is no law or military regulation requiring all service members to salute Medal of Honor recipients, but you are allowed to do so when the recipient is physically wearing the medal, according to the Congressional Medal of Honor Society.”

The ceremony took place in the East Room of the White House before a large group of invited guests and dignitaries.  Major General and Chief of Chaplains for the United States Army Douglas Lanier Carver began the ceremony with a prayerful invocation. President Obama then came to the podium and addressed the audience saying that this was the first decoration of the medal of honor to a living member of the military in 40 years.

After the the reading of the citation President Obama placed the medal around the neck of Staff Sergeant Giunta. The  President then shook hand the hand of the Staff Sergeant and hugged him. 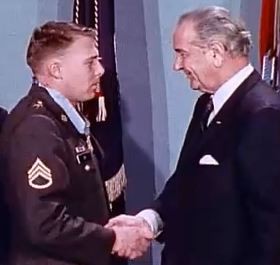 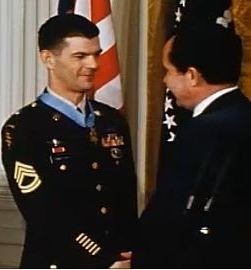 In our investigation we found two videos of Medal of Honor awards ceremonies officiated by President Richard M. Nixon and President Lyndon B. Johnson.  In both cases after the reading of the citation and presentation of the medal both U.S. Presidents shook the hands of the recipients.  Click for Nixon video.   Click for Johnson video.

The President of the United States has only been known to return the salute from military personnel and is often seen doing so when boarding or leaving Marine One, the Presidential helicopter.