Summary of eRumor:
A forwarded email with a photo of the second swearing in ceremony of President Barack Hussein Obama saying that along with Supreme Court Justice John G. Roberts the event was also officiated by Muslim Imam. The email says the first oath that President Obama took was purposely flubbed so he would not have to be officially sworn into office using a Bible.

The photograph is real but the image of the Moslem Imam has been added by a trickster. 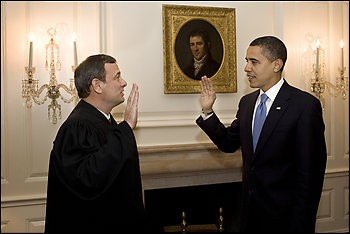 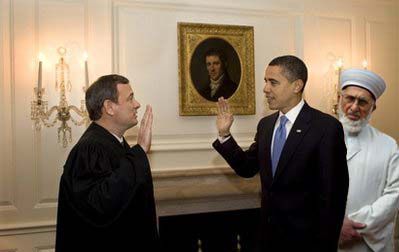 Official photo is shown on the left of the 2nd Swearing with Judge Roberts and President Barack Obama.  This was taken by White House Photographer Pete Souza.   On the right is shown the same photo with an Imam pasted in by some unknown trickster.

On January 20, 2009, Barack H. Obama was sworn in as the 44th President of the United States. The ceremony took place in front of the United State Capitol building but Supreme Court Justice John G. Roberts, who administered the oath, got some of the words of the oath mixed up.

Roberts was supposed to prompt Mr. Obama to say, “I do solemnly swear that I will faithfully execute the office of president of the United States, and will to the best of my ability, preserve, protect and defend the Constitution of the United States.”

He made a slight error, however, and the word “faithfully” was accidentally moved to after “the office of the United States.” Roberts appeared to have caught the blunder and repeated the line correctly but the President elect recited his Roberts’ original words and said, “that I will execute the office of president to the United States faithfully.”

Just to make sure there would be no constitutional crisis, the oath was administered again on the evening of January 21, 2009 in the White House Map Room. A few reporters were there along with some Obama aides and a Whitehouse photographer. No television cameras permitted but an audio recording was made.

The article stated that this was not the first time that a US President was sworn in a second time.   Calvin Coolidge and Chester A. Arthur both have repeated the oath  “because of unusual circumstances the first time around.”  Click for Washington Post story.

The BBC has an audio recording of the second swearing in ceremony.  Click for BBC recording