Dr. Ben Carson Has a Portrait of Him and Jesus-Truth! 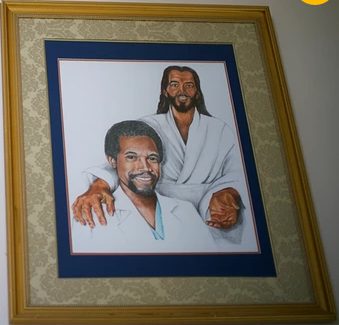 The photo went viral on November 7, 2015, when the Guardian posted a photo gallery from the 2014 photo shoot on its website. Other photos show awards, degrees and honors hanging on the walls of Ben Carson’s home.
The portrait of Ben Carson and Jesus isn’t new, either. The earliest reference to the portrait came in a 2009 Baltimore magazine profile of Ben Carson:

Their strong faith is also a guiding force. “We are very spiritual people so you will see a lot of Bibles around the house and things that are indicative of that,” says Carson, who attends a Seventh Day Adventist Church in Silver Spring. “I don’t have to be politically correct here.” He points to a stained-glass window in his foyer, a painting of him with Jesus, and his favorite proverb over the fireplace—”By humility and the fear of the Lord are riches and honor and life”—Proverbs 22:4.

Photos and reports of the Ben Carson-Jesus portrait didn’t draw any attention before Carson became the Republican frontrunner in the 2016 presidential election in 2016 — but the portrait is definitely real.