Something for the weekend. Percy Long Prong – a gigolo’s calling card found under floor boards.
😱😱😱
(I don’t know who originally posted this on FB – so apologies) pic.twitter.com/Kxjt6f8ie8

Although the Reddit post didn’t get a lot of traction, a concurrent post to Imgur with a similar title (“Friend works as restorer. Just found this under floorboards of old property he’s working on…”) was widely viewed and discussed:

Friend works as restorer. Just found this under floorboards of old property he’s working on…

From the top left, the card’s top front read:

Widows a specialty. P.T.O. [please turn over] for Price List.

Notably absent from the card’s front was any means of contacting Percy Long Prong, or even a general location. The card’s back was significantly more explicit, with prices listed in shillings (s.) and pence (d.): 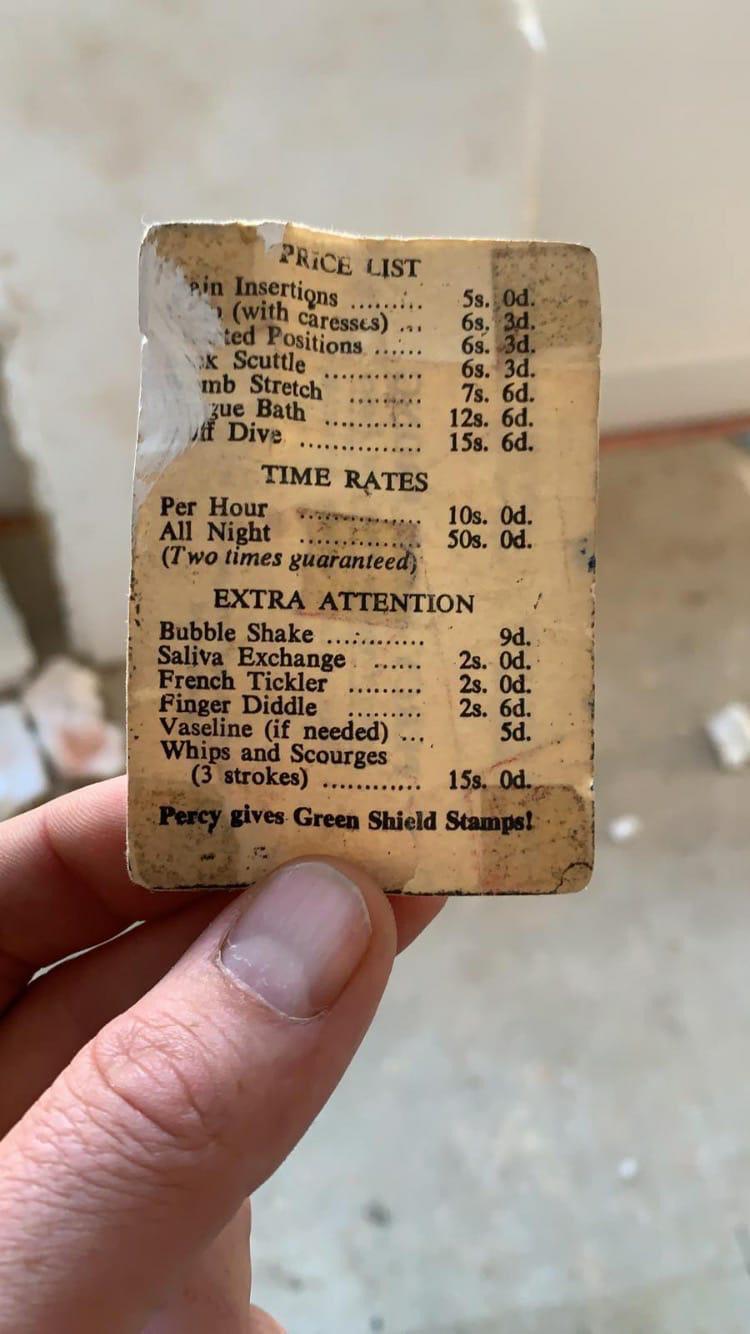 At the lower end of the price list was “Plain Insertions” for five shillings, with “Muff Dive” on the high end at 15 shillings and sixpence. Next were “TIME RATES,” at ten shillings flat per hour, and 50 shillings for “All Night.”

A third portion of the list was “EXTRA ATTENTION,” and services such as “Bubble Shake” for nine pence, “French Tickler” for two shillings, and “Whips and Scourges” for 15 shillings. The back of the card also lacked any contact information, but noted that Percy “gives Green Shield Stamps!”

In the Imgur comments, u/Toadio maintained that the card was a joke, writing:

This is a joke card. Friend made “Rent-A-Scandal” cards and left them around. Got one into Tutankhamen’s display case in London Museum.

Imgur user AssDewlap identified the card as one of “many other versions floating around the internet.” In the comment was a link to an extremely similar card, but this one was seemingly American in origin: 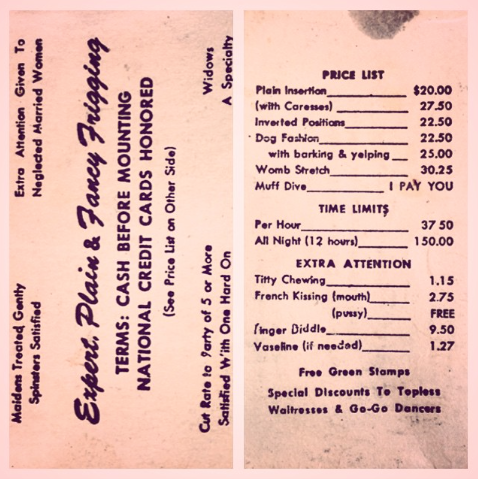 Like the front of Percy Long Prong’s card, the back was strikingly similar, down to identical caveats like “with Caresses” and “Vaseline (if needed)”; albeit all items were priced in American dollars with a rate of $37.50 an hour and $150 for “All Night.” Percy’s American counterpart even promised “Free Green Stamps.” Both cards listed “Muff Dive” as the last item of the price list, but the American version read “I PAY YOU” in the “cost” field.

As u/AssDewlap noted, the second card was originally shared by u/mayonegg1. A reverse image search indicated it was also shared to r/funny in May 2015:

Turns Out My Grandma Was Getting Some Fancy Frigging from funny

Yet another similar (but not identical) card was shared to Twitter in 2014:

Another was uploaded to iFunny in May 2013: 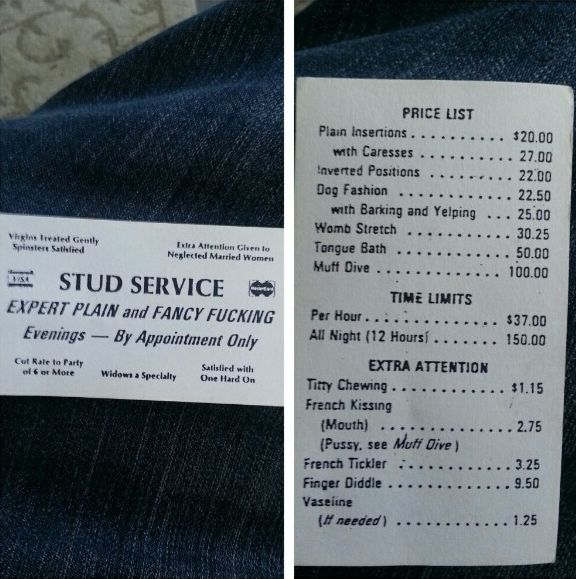 People “finding” the cards never seemed to have a Reddit account of their own; a 2012 thread in r/pics claimed their “friend found this on the floor of the elevator in his apartment”:

My friend found this on the floor of the elevator in his apartment, "Expert Plain and Fancy Fucking" from pics

Users claiming to have found similar cards among the possessions of their grandparents appeared on and off across the internet for years. One r/WTF user shared yet another version in 2012:

While going through my 85 year old grandfather’s desk, I found this business card. from WTF

A top comment on that thread provided an early explanation that appeared largely lost to the ages:

I’ve seen that card, often, back in the late 80’s. It was a novelty card that went around. Like a pre-internet meme.

From there, users speculated on “pre-internet memes,” responding:

“I wonder if back then people got as angry the second time someone showed them that card.”

“They didn’t get angry. They just complained that is should be posted on a different corkboard.”

“Or they complained that the owners of a different cork board stole their things.”

As it happened, the explanation appeared to be only partly accurate. A 1996 post to alt.tasteless.jokes wasted no time in bringing the joke to the early internet, but back then, they had to go to the work of transcribing it:

Incidentally, a commenter on the October 2020 r/myfavoritemurder post linked to a 2013 article mentioning a “Percy Long-Prong,” but no connection to a business card was described there. Instead, Mr. Long-Prong appeared to have won a prize for bad art; his winning effort was described as a dictionary placed atop Macbeth, titled “A Play On Words”:

The spoof art competition, set up in 1999 as a light-hearted take on the Tate Britain gallery’s Turner Prize, rewards low-effort works of art.

A Play On Words – a copy of Shakespeare’s Macbeth atop a dictionary – by Percy Long-Prong won first prize at a ceremony held at The New Inn, in Wedmore.

Nearly a quarter of a century later, Twitter user @CarrieCuinn responded to a since-deleted tweet about a similar card, explaining:

It's a joke card from mid-1900s. The cards were based off (or inspired?) Peter Longprong ("Expert, Plain, and Fancy Frigging") t shirts, too.

Mention of the shirt: https://t.co/bsZ8oKbVjE

@CarrieCuinn linked to the 2012 r/WTF thread, as well as a 1979 San Diego Reader article which briefly referenced the same joke on a t-shirt:

T-shirts for sale announce on the chest: “Peter Longprong… Expert, plain, and fancy frigging.” The back of Bob Grenci’s shirt declares, “Boogie till ‘ya puke.” Others are in rugby shirts or OMBAC shirts or over-the-line shirts, and as the Chargers manhandle the Rams, the noise increases along with the bull. “… You take the back, see, use him as a rover, and then they don’t have any outside threat…” It’s the off-season for OMBAC, the next big event is the rugby tournament in January, but that doesn’t stop the hard core members from having a good time now. As the sun drops lower, the sand blows harder, and the crowd in the bar gets larger, everybody’s an expert at something, everybody’s a winner, everybody’s shithouse mouse.

Since at least 1996, internet users had been uploading or transcribing iterations similar to Percy Long Prong’s calling card, first to newsgroups, then to Reddit, Twitter, Facebook, and beyond. Innumerable versions of the cards existed, often presented as having been found by “a friend” under floorboards among a grandparent’s possessions. Though the cards spanned many versions in the UK and United States, they typically shared almost identical language and all lacked any contact information. It appeared the cards began as a pre-internet proto-meme that was passed around as a joke at various times — and then, years later, misunderstood by grandchildren who came across them. Social media users’ repeated failure to get the joke was an amusing coda, alluding to a longer history of what are today commonly understood as “memes.”