There is a genuine Change.org petition to "Not Allow Jeff Bezos Re-Entry To Earth."

On June 15 2021, an Imgur account shared a purported screenshot of a Change.org petition that bore the blunt and to-the-point title, “Petition To Not Allow Jeff Bezos Re-Entry To Earth”: 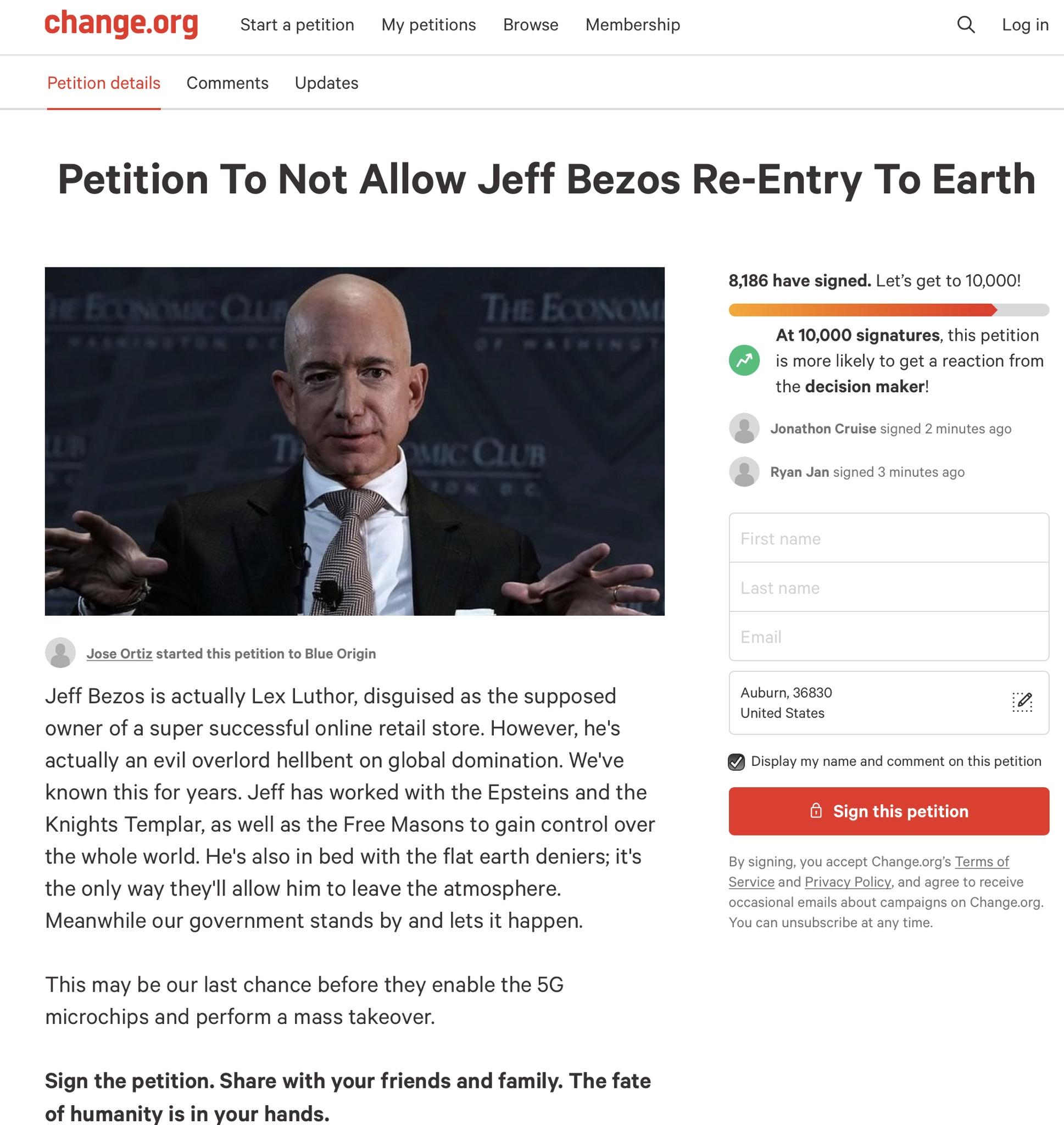 The context of the petition and its focus on Amazon’s chief executive officer Jeff Bezos was explained a few days previously, when reports appeared that Bezos was headed for a jaunt in space:

Jeff Bezos can have anything. He could circle the globe in a private jet or sail it forever in a fleet of megayachts. He could afford to buy a the whole NFL; he could buy an archipelago for his family and friends; he could buy over 65,000 Bugatti Chirons (base price $2.9 million), even though only 500 are being built. As the world’s richest person, the possibilities are endless. But Bezos appears ready to risk it all for an 11-minute ride to space.

Just how risky is his decision?

On July 13 2021, People magazine indicated that an unnamed individual placed a winning bid of $28 million to accompany Bezos to space:

An auction for a trip to space alongside Jeff Bezos and his brother in July [2021] ended with a winning bid of $28 million.

On Saturday [June 12 2021], Blue Origin – the aerospace manufacturing and spaceflight company founded by the Amazon billionaire, 57, in 2000 – announced that a seat on a spacecraft, named New Shepard, was officially purchased during an online auction.

The high bidder from the auction, as well as a fourth passenger, will be revealed in the weeks to come, Blue Origin added. Though the capsule can take on six passengers total, this trip will be limited to four, per NBC News.

Incidentally, at approximately the same time the Imgur screenshot of the purported Bezos petition appeared, another account shared a news screenshot from Insider.com about Amazon.com’s workforce: 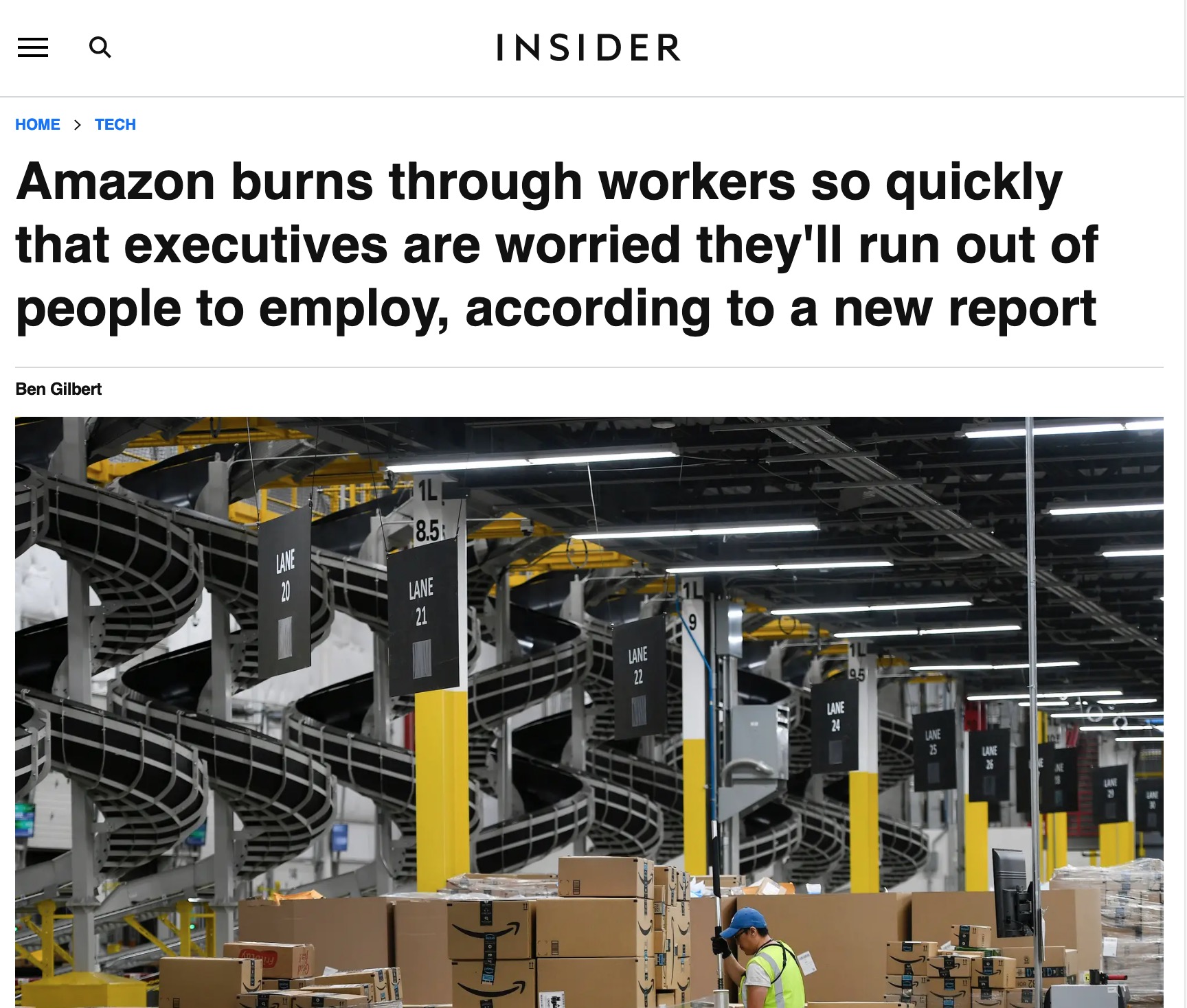 Amazon burns through workers so quickly that executives are worried they’ll run out of people to employ, according to a new report

Under the screenshot was a link to the article, which was published on June 15 2021:

Amazon has been hiring hundreds of thousands of workers for roles in its warehouses, which it calls fulfillment centers, but those employees have been quitting almost as fast as they can be hired, according to a huge report from The New York Times published on Tuesday [June 15 2021].

Many of the over 350,000 workers Amazon hired from July to October [2020] stayed with the company “just days or weeks,” the report said.

Hourly employees had a turnover rate of about 150% every year, data reviewed by The Times indicated. That led some Amazon executives to worry about running out of hirable employees in the US, the report said.

Finally, the concept of denying Bezos re-entry to Earth might appear to be without precedent. However, in late April 2021, we fact-checked a circulating image of what appeared to be customs forms filed by NASA on behalf of the crew of Apollo 11, which is exactly what they were:

As for the petition (which had 8,186 signatures at the time the screenshot was taken), it is real, in that it does exist and is getting signed. It consists of an open letter addressed to Blue Origin (the spaceflight company founded by Bezos), it read:

Jeff Bezos is actually Lex Luthor, disguised as the supposed owner of a super successful online retail store. However, he’s actually an evil overlord hellbent on global domination. We’ve known this for years. Jeff has worked with the Epsteins and the Knights Templar, as well as the Free Masons to gain control over the whole world. He’s also in bed with the flat earth deniers; it’s the only way they’ll allow him to leave the atmosphere. Meanwhile our government stands by and lets it happen.

This may be our last chance before they enable the 5G microchips and perform a mass takeover.

According to Change.org, a “Petition To Not Allow Jeff Bezos Re-Entry To Earth” was created on or around June 9 2021, and it had over 10,000 signatures as of mid-day on June 16 2021. The text of the petition was clearly tongue-in-cheek and referenced satirical reasons (Bezos being “in bed with the flat earth deniers,” for instance) versus sincere objections to Bezos and his business practices. And while NASA did have to file customs forms for Apollo 11, it was unlikely any legal mechanism existed or would be used to deny Bezos re-entry to Earth in July 2021.