Bob Marley said "I wish we were all hippies and did yoga, lived in cottages, smoked weed, accepted everyone for who they are, and listened to wonderful music. I wish money didn't make us who we are. I just wish we could redo society." 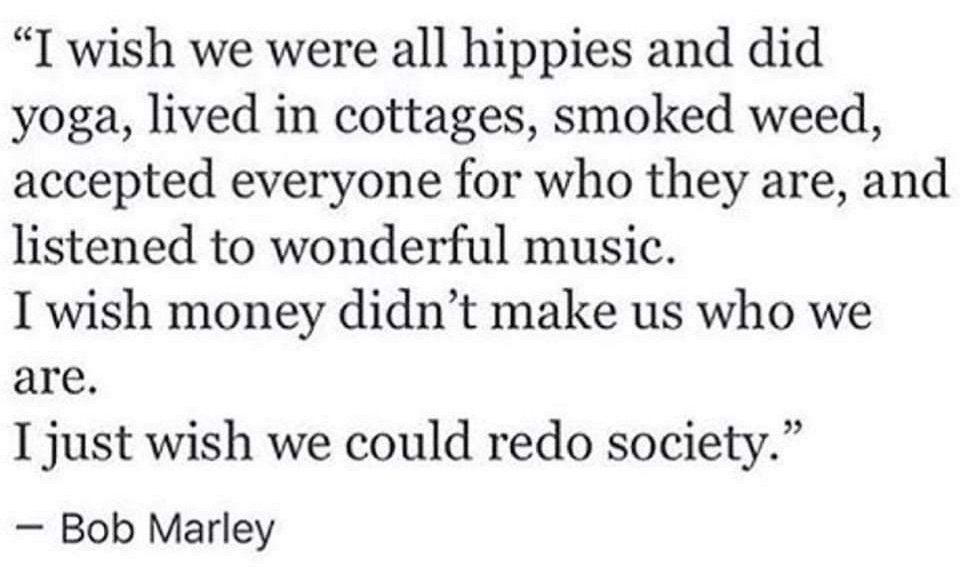 Nothing in the image nor the status update inspired confidence that this was anything Bob Marley might have actually said, but it was shared thousands of times in only a few days regardless.

Even in image format, the attribution to Marley looked shaky; the font in which “Bob Marley” was rendered did not match the font used for the quote.

“I wish we were all hippies and did yoga, lived in cottages, smoked weed, accepted everyone for who they are, and listened to wonderful music.

“I wish money didn’t make us who we are.

“I just wish we could redo society.”

Since the post lacked attribution, we sought any weightier or more credible record of the musician, performer, and activist stating he wished “we were all hippies.”

However, our search for more convincing attributions was not immediately successful, leading us down garden paths and to strange places like AirBnb listings from 2015. Goodreads — the unwitting source for many misquotes and inaccurate attributions — featured a version of the quote shared as early as September 2014; no information about the source of the commentary appeared alongside it.

A Google search bracketing “I wish we were all hippies” with Marley’s name returned only two pages of results, not restricted by date, and another marginal, undated source attached a year (1968) to the quote. On Tumblr (which is responsible for an entire cornucopia of Frida Kahlo misquotes), an account shared the quote from a since-deleted account on March 17 2014:

An initially promising result returned from the year 2011 was an article with the headline, “The Truth Is, Bob Marley Never Said That, Either.” That article described the widespread attribution of quotes to Marley, but did not mention the “I wish we were all hippies” one:

All of that erroneous quoting reminded us of something that has been bothering us for the past year or so; namely, whether or not Bob Marley really said this:

“Truth is, everybody is going to hurt you; you just gotta find the ones worth suffering for.”

It is all over the Net — over a million citations, all credited to Marley. We’ve come across at least a hundred people who use it as their favorite quote on their Facebook page. And we are almost certain that Marley never said or sang anything of the sort. Over 4.4 million people have “liked” the quotation’s fan page, for crying out loud.

We searched Google Groups and were unable to come across any use of that quote before 2001, two decades after Marley’s death. You’d think a quote as popular as that one has proven, one allegedly uttered by one of the most famous entertainers in world history, would have turned up sooner … Can anyone cite a primary source that proves Bob Marley actually uttered those now-ubiquitous words?

The date of that article was interesting and perhaps notable when contrasted with the first correctly dated iteration of the “wish we were all hippies” quote we uncovered. It was published on August 3 2011 on a personal blog:

“I wish we were all hippies and did yoga, lived in cottages, smoked weed, accepted everyone for who they are and listened to wonderful music. I wish money didn’t make us who we are. I just wish we could redo society.” ~ Bob Marley

In October 2017, one skeptical commenter gently questioned the blog post:

This seems a very un Bob Marley like quote to me.. I have never heard him mention Hippies before never mind living in cottages and thought he usually referred to his “weed” as Ganja or Herb?… me thinks it’s gotta be fake… but happy to be corrected[.]

In response, the author admited that they shared the commenter’s doubts that it sounded precisely like Marley:

Probably not exactly how he said it, if he said it, hard to discern with all the quotes out there these days, but I just loved the sentiment so had to share it 🙂

It was possible that that first poster spotted the sentiment on a site (like Tumblr) on the page of a person who used a Bob Marley avatar, or even that it was previously misattributed. We were unable to find an older version of the quote that wasn’t misdated by Google.

Additionally, the initial commenter observed that Marley was unlikely to have described cannabis as “weed,” versus “ganja” or “herb.” Marley’s Wikiquote entry (which did not contain the quote or any reference to it) included five instances of the word “herb,” but none of other terminology (like “weed”):

“All dese governments and dis this and that, these people that say they’re here to help, why them say you cannot smoke the herb? Herb… herb is a plant, you know? And when me check it, me can’t find no reason. All them say is, ‘it make you rebel’. Against what?”

As is often the case with quote memes, the “I wish we were all hippies” quote attributed to Bob Marley rose from an obscure blog post to Tumblr infamy, before evolving to visual memes on Facebook. We were unable to find anything definitively linking him to this quote, and its first iteration did not appear online until 2011, three decades after his death.