One volcanic eruption in Iceland in 2009 released enough carbon dioxide to negate all human efforts to reduce carbon emissions over the previous five years.

Australian geologist and professor Ian Rutherfod Plimer became the face of climate-denying chain emails in 2010, when he was portrayed as the expert “source” behind a false claim about the effects of a volcanic eruption in Iceland on the planet’s carbon dioxide levels.

The chain letter read in part:

Professor Ian Plimer could not have said it better!

If you’ve read his book you will agree; this is a good summary.

PLIMER: “Okay, here’s the bombshell. The volcanic eruption in Iceland. Since its first spewing of volcanic ash has, in just FOUR DAYS, NEGATED EVERY SINGLE EFFORT you have made in the past five years to control CO2 emissions on our planet – all of you.

Of course, you know about this evil carbon dioxide that we are trying to suppress – its that vital chemical compound that every plant requires to live and grow and to synthesize into oxygen for us humans and all animal life.

I know….it’s very disheartening to realize that all of the carbon emission savings you have accomplished while suffering the inconvenience and expense of driving Prius hybrids, buying fabric grocery bags, sitting up till midnight to finish your kids “The Green Revolution” science project, throwing out all of your non-green cleaning supplies, using only two squares of toilet paper, putting a brick in your toilet tank reservoir, selling your SUV and speedboat, vacationing at home instead of abroad, nearly getting hit every day on your bicycle, replacing all of your 50 cent light bulbs with $10.00 light bulbs….. well, all of those things you have done have all gone down the tubes in just four days.

This particular claim was attached to the eruption of the Eyjafjallajokull volcano, which spread enough ash to disrupt travel around Europe for nearly a month, and as so often happens, spread further online as copypasta and memes: 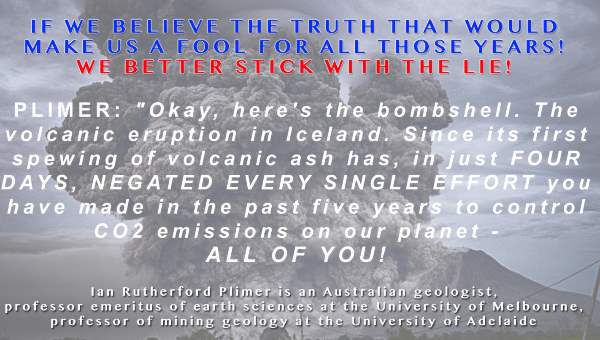 It is unclear, though, whether Plimer actually said or wrote an iteration of the post. He did, however, argue something similar in a 2010 op-ed for the Australian Broadcast Company (ABC):

Over the past 250 years, humans have added just one part of CO2 in 10,000 to the atmosphere. One volcanic cough can do this in a day.

Plimer also referenced Eyjafjallajokull’s eruption in an interview with ABC radio host Jason Morrison claiming that the amount of ash it spread was “telling us there’s a huge amount of greenhouse gas being released from this volcano, unpronounceable volcano.”

Pilmer’s claims were quickly debunked; as the Australian Associated Press reported at the time:

The volcano was estimated to have produced a maximum of 30,000 tons of CO2 everyday it was active, or 0.00003 gigatonnes, according to a research report from The Macaulay Land Use Research Institute, now the James Hutton Institute, based in Scotland.

Another estimate in a media report put Eyjafjallajoekull’s eruption emissions at 150,000 to 300,000 tons of CO2 per day. This would mean the volcano produced between 0.014 gigatonnes to 0.029 gigatons of carbon over the 95 day eruption period — at least 1000 times less than the annual human emissions at around that time.

ABC’s own in-house program Media Watch also criticized the company’s Rural Radio division, for giving Plimer a platform and justifying it by saying that he was “on the record” with this claims.

“Maybe not, but that still doesn’t make them news,” Media Watch noted.

Plimer’s discrediting has only continued since that episode; in 2018, a group of scientists convened by the not-for-profit group Climate Feedback roundly criticized another op-ed Plimer wrote, this one  claiming that “it has yet to be shown that human emissions of carbon dioxide drive climate change.”

“The article includes many outright lies as well as unrelated points made to feel as though they are connected to climate,” said University of Colorado researcher Twila Moon in response. “I am actually surprised that any news outlet would publish an opinion piece with so many falsehoods, easily debunked by even cursory reference to decades of published work from scientists and scientific organizations around the globe. An appalling piece of rhetoric.”

In July 2020, Australia’s Press Council flagged newspaper The Australian for publishing another piece by Plimer, saying that it failed to ensure accuracy and to ensure that facts were “presented with reasonable fairness and balance and opinion is based on fact.”