"Today I learned that pockets on dresses were phased out so then woman could prove they were not witches carrying ill intentions and spells. This is why woman love pockets in skirts and dresses now. We carry our spells and curses without purses and you won’t see us coming. 🔮👻"

On April 19 2021, a Facebook user shared a screenshot of a tweet claiming that pockets had been “phased out” of women’s dresses due to accusations of witchcraft, and so that women could prove that they were not hiding spells, herbs, or ill intentions: 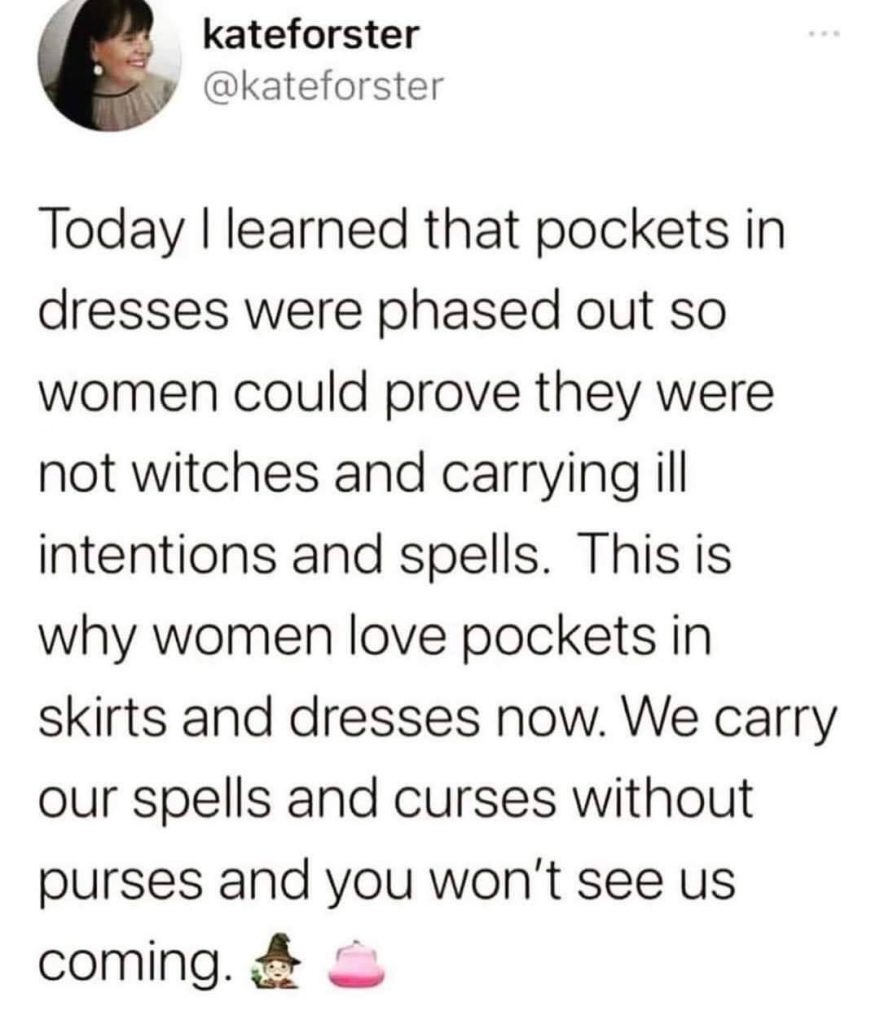 Today I learned that pockets in dresses where phased out so women could prove they were not witches and carrying ill intentions and spells. This is why women love pockets in skirts and dresses now. We cary our spells and curses without purses and you won’t see us coming.

It was not clear whether the tweet was intended to be taken seriously in light of its final claim (“this is why women love pockets in skirts and dresses now.”) The first thing we noticed was that despite its popularity, the tweet was deleted by its original author and was not archived:

I love this. #pocketses https://t.co/CiXnCPDPvy

I listened to a podcast recently about pockets, it’s a really fascinating subject. Basically pockets were phased out of women’s clothing because of the sexist and classist idea that a women who was taken care of had no need for pockets. She didn’t need to carry tools, identification or money.

Men on the other hand ended up with dozens of pockets. Ridiculous.

There’s also a theory that in a perfect, utopian world we would not need pockets because we’d never need to carry anything with us.

I’m sure there’s much more history to pockets, but that’s just what the podcast covered, from what I can remember.

Edit: the podcast is Articles of Interest.

Four years prior to the tweet’s appearance, Mic.com published a piece titled “The Weird, Complicated, Sexist History of Pockets.” (The absence of pockets in women’s and girls’ clothing is a frequently discussed topic in sartorially-minded corners of social media.)

Mic.com included a timeline for pockets:

Women’s clothes didn’t really have internal pockets for most of history, even while men’s started appearing in the late 1600s. According to London’s Victoria and Albert Museum, while pockets in menswear were often sewn directly into garments (like they still are today), women had to get crafty and wrap a sack with a string around their waists and tuck it way under their petticoats.

A professor from the fashion-oriented Parsons School of Design was quoted in the portion where “pockets” were replaced by “pocketbooks” or “purses”:

Remember when everyone started wearing skinny jeans and then all the pockets disappeared? Well, that basically happened in the 1800s too, when the silhouette of popular dresses slimmed down into a more Grecian-inspired silhouette, leaving no room for internal “pocket” pouches at all.

“Women … would study the ancient texts and couldn’t find pockets, so they didn’t use them in the dress,” Elizabeth Morano, a professor at Parsons School of Design, told Marketplace. “Some of those stories are just stories, but the line was a lot more sleek. Think of the neoclassical dress. It’s straight up and down. The line of the clothing changes completely.”

So the purse was born….

No portion of the timeline mentioned “witchcraft,” or even the unseemly “hiding” of contraband. Mic.com linked to a 2014 article about gendered clothing and pockets, quoting fashion historian Barbara Burman:

Well-to-do women weren’t supposed to need their hands for labor, and carrying money just wasn’t supposed to be a wife’s concern. In Burman’s words, “the frustrations and limitations of women’s access to money and ownership of property were neatly mirrored in the restricted scope of their pockets.”

In October 2017, National Galley of Victoria textile and fashions curator Paola Di Trocchio told ABC.net.au that pockets fell out of favor in the latter part of the 19th century, stating that while “women had begun to go out in public more ‘it was the men, typically, who handled money.'” Consistently, fashion historians cited currency-handling conventions, not witchcraft, as the cause of the disappearing pockets.

In November 2019, Outside Online’s pocket history referenced changing silhouettes as a contributing factor in the 20th century:

But while integrated pockets on men’s apparel were perfected, according to Vox, dressmakers put them in weird, impractical places, like near the hem of the skirt. Pockets became almost politicized, as some women fought for “pocket equality” while fashion trends pushed reticules and purses. Pants pockets ultimately suffered the same fate: when women started wearing pants more regularly, around World War II, the focus was initially on their function, so pockets were large and practical. But again, as fashion evolved and designs slimmed, pockets messed with the silhouettes and started to shrink and disappear.

Plenty has been written about pockets and their absence from women’s clothing, particularly dresses. The ongoing discourse has led to years of thinkpieces about the history of pockets, often featuring extensive commentary from fashion historians.

It is not entirely clear whether a December 2020 tweet claiming that “pockets in dresses where phased out so women could prove they were not witches and carrying ill intentions and spells” was not intended as humorous; its enduring popularity coupled with its deletion suggested a gap between how the tweet was intended and how it was received.

Nevertheless, it continued circulating in screenshots, and users were unsure of its accuracy. We looked at several articles about pockets and dresses, and historians cited both sexist mores involving handling money and evolving silhouettes as the primary causes of a dearth of pockets in women’s clothing.