An eRumor titled “What’s Obama Reading?” with a photo of Barack Obama holding the book, Post-American World by Fareed Zakaria. The eRumor implies that Obama is a Muslim, that he is the most liberal nominee to run in history, and that this book predicts the end of the United States.

1. Is this photo authentic or fabricated?
2. Is Obama the most liberal nominee to ever run for president?
3. Is the book he’s holding in the picture, The Post-American World, a scary book written by a Muslim?
4. If it is written by a Muslim, does that make him a “fellow” to Barack Obama?

Let’s take this one question at a time.

1. The photo of Barack Obama with book in hand is authentic and according to a  New York Times Book Blog written May 21, 2008 was taken by Doug Mills for the New York Times in Bozeman, Montana. 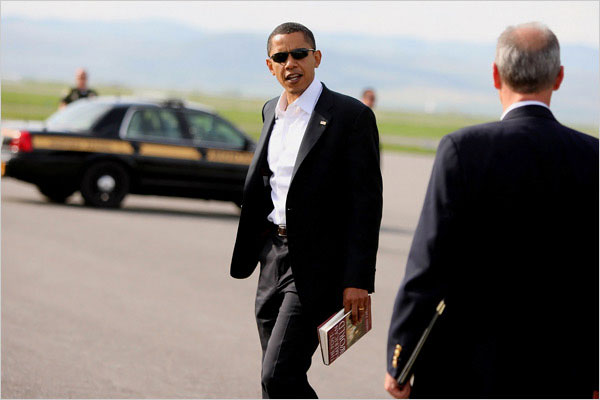 2. Whether Barack Obama is “the most liberal person to ever run for president” we would classify as a matter of opinion, but he is proudly liberal and has ranked as one of the most liberal among senators. The National Journal uses 99 key Senate votes each year to classify Senators and ranked Obama as the most liberal in 2007.

3. The Post-American World was written by Fareed Zakaria who is an editor at Newsweek International, has a regular column in Newsweek, Newsweek International and the Washington Post. He also hosts the weekend CNN program on international affairs, Fareed Zakaria GPS.  He was reared Muslim in India but is an American citizen and describes himself as “not a religious guy.”  In a 2008 Newsweek article about his book, Zakaria wrote, “The post-American world is naturally an unsettling prospect for Americans, but it should not be. This will not be a world defined by the decline of America but rather the rise of everyone else. It is the result of a series of positive trends that have been progressing over the last 20 years, trends that have created an international climate of unprecedented peace and prosperity.”

4. There is no evidence that Barack Obama is Muslim although critics attempted to make that an issue in his 2008 presidential campaign. CLICK HERE for TruthOrFiction.com’s article on that issue.