Summary of eRumor:
A forwarded email with an open letter to President Barack Obama from author Lou Pritchett.  In it Pritchett lists many of the unanswered questions about the President’s background which raises concerns.
The Truth: 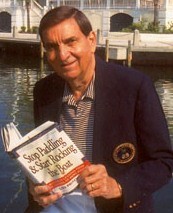 Lou Pritchett is the author of this opinion and told TruthorFiction.com that he submitted this to the New York Times under the title of  “Obama, You Scare Me” but they never published it.
Pritchett did say that his article managed to make it to the world wide web where circulation went ballistic.
Pritchett is a former vice president of Procter & Gamble and wrote “Stop Paddling and Start Rocking the Boat” as well as numerous books and periodicals.

Sometime in April 2012, Pritchett wrote a follow up to his opinion saying that President Obama “no longer scares me, he terrifies me.”

Video of Lou Pritchett reading his letter found on YouTube
We found Pritchett’s second letter posted, by him, on the July 11, 2012 online edition of the Topanga News :

I was born in year two of the Great Depression (1931) and spent the first 10 years of my life influenced by the extreme hardships of the depression. By today’s standards my family was about a mile below today’s so-called ‘poverty level’ but if you never ‘had,’ doing without was not so ‘bad.’ Borrowing shoes to graduate from the 8th grade didn’t seem at all demeaning because most of the 8th graders did the same thing.

In June 1944, my only brother, Joe, was killed in action on Utah Beach in Normandy, France during the D-Day landings. Exactly one year later, my father died and left me, my mother and my sister to go it alone… and alone we went. My mother went to work at a department store, my sister dropped out of school and joined her and I went to work shining shoes on the streets of Memphis for a dime a shine. Government assistance was not available, and if it were, I am confident my mother would have refused it because she never wanted the government involved in our lives.
I mention this bit of personal history to help you understand that millions of Americans, including your parents and grandparents, grew up like me during the Great Depression and never expected nor wanted the government to offer them anything other than an opportunity. And now to see what Obama is trying to do to our country, can make you crazy.
As some of you know, my “Scare Me” letter went viral with millions of hits on the internet during the past three years. I have now written a follow-up letter which I will now share with you:

In April 2009, I sent President Obama and the New York Times a letter titled “You Scare Me” because, as a candidate, he promised to “fundamentally transform America.” Now, after observing his performance for over three years, he no longer scares me—he terrifies me for the following reasons:

FIRST: He has done more to damage America’s standing in the world, to lower the standard of living in America, to impoverish future generations and to shake our faith in the country’s future than any other American president in history.

SECOND: With a compliant Democrat congress, a lapdog media and a weak, almost nonexistent Republican opposition, he has shattered the American dream of job security, home ownership and rugged individualism for millions of Americans and has poisoned and divided our civil society with his politics of envy, class warfare, race warfare, and religious warfare which he is using as fundamental building blocks for his ‘socialist’ agenda.

THIRD: Culturally, he remains totally out of touch with traditional American values. This has absolutely nothing to do with race or where he was born, rather it has everything to do with where, how and with whom he was raised, schooled, educated, trained and associates with still today.

FOURTH: He has surrounded himself with naive academicians, lawyers, politicians, bureaucrats and socialist-leaning czars who arrogantly think and behave exactly as he does. People who offer no balanced suggestions or devils advocate positions and think in lock-step with him that big government is the answer to all our problems.
FIFTH: He not only encourages but aids and abets in the unionization of all American industry, the albatross around the neck of the free market. In turn, they provide the money and muscle to intimidate his opponents.

SIXTH: He has increased the national debt by over 30% in just three years. If re-elected and this rate of increase continues, America will be burdened with an unsustainable $20 trillion dollar debt which will result in the country’s financial death. Recovery will be impossible – America will be the Greece of 2016.

SEVENTH: Given his fanatical adherence to the ‘environmental’ and ‘man-caused global warming’ fringe, he has deliberately discouraged U.S. fossil fuel exploration and production while wasting millions of taxpayer dollars on solar, wind and algae experiments. He refuses to accept that oil, gas and coal are not America’s enemies, they are America’s assets which, if properly managed, could make us energy independent within a generation.

EIGHTH: He views the U.S. as a power in retreat which abused its World dominance. Therefore, he systematically apologizes round the world. Last March he whispered to Russian President Medvedev “… this is my last election. After my election, I have more flexibility.” Just what is the secret that Obama and Putin are concealing from the American people until after the election? With what other leaders has he made similar secret agreements?

NINTH: And finally, after all his missteps, bad decision making, poor management, and zero leadership, the fact that he has the audacity to seek re-election should terrify every American.

I predict that if re-elected, future historians and political interpreters will look back at the eight year period 2008-2016, and conclude “the 44th President of the U.S. allowed the takers to overpower the payers which resulted in the greatest economy in history vanishing from the face of the Earth.” Farewell, America. The World will really miss you!”

It is my hope and prayer that this letter will also go viral and serve as a ‘wake up’ call to Americans of all political leaning, convincing them that never before in U.S. history has so much depended on Americans understanding that we are facing one of the greatest crises in U.S. history. Convincing them that this election will be won not by letters to the editor, political speeches or radio and TV soundbites.

No!!! it will be won by those with a conviction, with a belief and with a willingness to pay the price in helping put the most enlightened voters in the polling booth on November 6.

Let me end on my favorite quote which I think is very appropriate for each of us today:

“TO EVERY MAN THERE COMES IN HIS LIFETIME THAT SPECIAL MOMENT WHEN HE IS PHYSICALLY TAPPED ON THE SHOULDER AND OFFERED THE CHANCE TO DO A VERY SPECIAL THING, UNIQUE TO HIM AND FITTED TO HIS TALENT; WHAT A TRAGEDY IF THAT MOMENT FINDS HIM UNPREPARED OR UNQUALIFIED FOR THE WORK WHICH WOULD BE HIS FINEST HOUR.”
Those words, spoken by Winston Churchill over 70 years ago, are very appropriate for the Tea Party Movement today.
For if each of us is prepared and is qualified then November 6, 2012, just might be our and our Country’s finest hour as we reclaim this “shining city on the hill” from the ravages of Obama Socialism.
IT IS NOW OR NEVER FELLOW PATRIOTS –GOD HELP US IF WE FAIL!