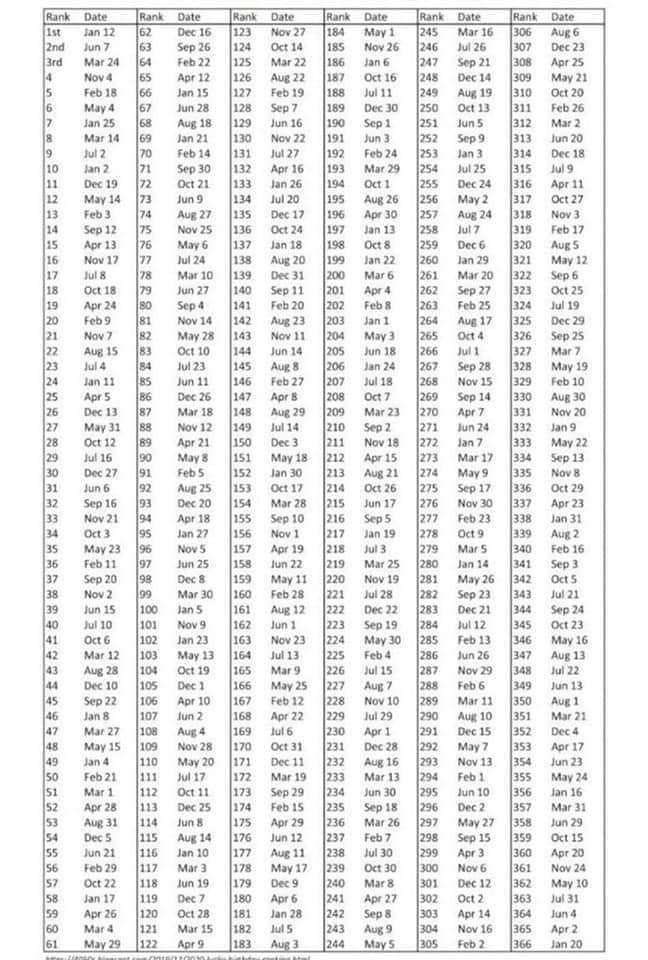 Like other popular posts of the type (some of which were pure engagement bait), the original post provided no source or additional information about its ranking of “most common birthdays.” Text at the bottom of the image hinted at a possible source, but was cropped so that it was unreadable.

Our reverse image search led to a July 30 2021 tweet with an interesting omission. In that earlier iteration, @INMYHEADPATT asked “on which rank is ur birthday?” but didn’t indicate by which characteristic birthdays were to be ranked:

on which rank is ur birthday ? pic.twitter.com/rzfxxpQCKP

Cropping on the bottom of that image enabled us to trace it to an actual source, an October 2020 blog post titled “2020 Lucky Birthday Ranking + 3 Years Rankings.” That post began with an introduction suggesting it was doing a bit of heavy lifting to drive traffic:

【This was published during late 2019, before COVID-19 become “official”, amidst this trying times, let’s #BePositive, #SpreadPositivity and have some fun “finding” #LuckyBirthday! Thanks to all who have read, shared, tweeted this article. Cheers! 😉😁】

A friend shared a picture of 2019 lucky birthday ranking, despite its tiny wordings and some missing numbers, we had fun searching for our ranks and joked about our luck. Since it was only an image without any info, I’d googled and found out that it was an excerpt from a Japanese blog メディガク. The author didn’t quote the source but mentioned this book, [男女別]誕生日占い事典, as a favourite divination read. I’ve assumed it as Gregorian calendar.

Emphasis ours — the post was never intended to represent a “most common birthdays” ranking; rather, it was intended to be a “luckiest birthdays” of 2020, 2019, or some other year. We have covered similarly viral “most lucky birthday” lists:

As we noted on the “luckiest birthday” list page, “lucky birthday” lists were refreshed annually (and regularly circulated years after they were published):

A long-circulating list described as “Chinese ‘luckiest birthdays’” on Facebook, as a “fortune ranking” on Twitter, and as a list “from Japan that ranks people from most lucky to least lucky based on birthday” was globally popular, and almost always out of date and removed from its context. The list appeared to originate on the blog Megidaku not as a specific tradition, but an annual creation based on the input of ten individual “fortune tellers” in Japan. A version of the list circulating in September 2020 on Facebook was out of date, and the actual list for 2020 provided January 12 2020 as the most lucky, and January 20 2020 as the least lucky.

Data do exist with respect to the most common birthdays or birthdates, such as a 2006 New York Times table, “How Common Is Your Birthday?” As a reader observed, logically the least popular birth date would be February 29 — in 366th place on the Times‘ ranking.

Articles from Reader’s Digest, Parents magazine, and WMAQ (cautiously titled “This is the Most Common Birthday in the US: Report”) referenced a 2016 post on the “semi-retired” data visualization blog TheDailyViz.com, “How Common is Your Birthday? This Visualization Might Surprise You”:

It’s baby season in America, with September the busiest month for births on average in the last two decades. So it seemed like the right time to remix this blog’s most-popular post: How Common is Your Birthday?

That old heatmap, which highlighted specific dates for popularity, has been viewed more than 500,000 times here and published across the web. But it was flawed, namely that it used ordinal data (birthday ranks by date) rather than continuous data (actual births counts by date). This graphic finally addresses that problem[.]

Reader’s Digest identified the data’s actual most common birthdays, as well as a seasonal trend:

According to real birth data compiled from 20 years of American births, mid-September is the most birthday-packed time of the year, with September 9th being the most popular day to be born in America, followed closely by September 19th.

TheDailyViz.com noted that an earlier, related post (“How Common is Your Birthday?”) was the blog’s most popular ever, and “remixed” underlying data to create a refreshed “most common birthday” heatmap using raw data provided by statistics site FiveThirtyEight.com. Originally, the data was compiled for two FiveThirtyEight.com pieces, one about Leap Day (February 29) births, and one about how concerns around having a baby on Friday the 13th reflected in “about 800 fewer” births:

“Feb. 29 comes around once every four years,1 an add-on to make calendar math add up. So you’d think there would be about a quarter the number of leap day babies — also known as leaplings, leapers or leap year day babies — as there are people born on any other day.

“But in fact, there are 7 percent fewer than you’d expect. The chief reason appears to be that there are far fewer cesarean deliveries on Feb. 29 than on surrounding days. Leap day babies, their mothers and their obstetricians say many mothers try to avoid delivering on the quadrennial date by scheduling induced labor or cesareans on a different date.”

Thousands of babies are born in the U.S. whenever Friday falls on the 13th of the month — but about 800 fewer than you’d expect if parents and the doctors who deliver their newborns treated it like any other day.

Many births are scheduled, either as induced deliveries or cesarean section. And given the choice, lots of parents would rather not take their chance with a date that delivers a double whammy of superstitious bad luck, tying together longstanding fears about Fridays and the number 13.

An August 2021 Facebook ranking of “most common birthday” dates was virally popular, and users spent untold hours scanning its fine print to locate their birthdays. However, the post was an iteration of cyclical lists of “luckiest birthdays” for any given year, and was not intended to be a reflection of which dates were a “most common” birthday. The list seen in the post was for 2020’s “luckiest birthdays,” and was outdated as of 2021.