Rep. Adam Schiff was a vocal critic of Donald Trump's presidency because he is related to billionaire George Soros.

Democratic Party Rep. Adam Schiff’s penchant for criticizing Donald Trump’s presidency made him a prime target for right-wing disinformation, and in one instance conspiracy theorists invented an entire relative in February 2018 in order to link him to one of their recurring targets.

A fringe blog introduced the false claim that the Democratic lawmaker and billionaire George Soros were related by marriage:

Billionaire George Soros’s son Robert and his estranged wife Melissa Schiff are at risk of forfeiting their entire art collection — including pieces by Jeff Koons and Christopher Wool — if they can’t agree on its value, his lawyer said.

The former couple were in Manhattan Supreme Court Wednesday for the opening day of their $350 million divorce trial.

The “coincidence” was meant to be that Soros, chair of the House Intelligence Committee, had authored a memo defending the Justice Department and the Federal Bureau of Investigations (FBI) for carrying out surveillance against Trump and one of his aides, Carter Page, during Trump’s 2016 presidential campaign.

Schiff does not have a sister. But the blog’s shoddy claim, predictably, spread in conspiracy-thirsty posts insisting that they were “connected”: 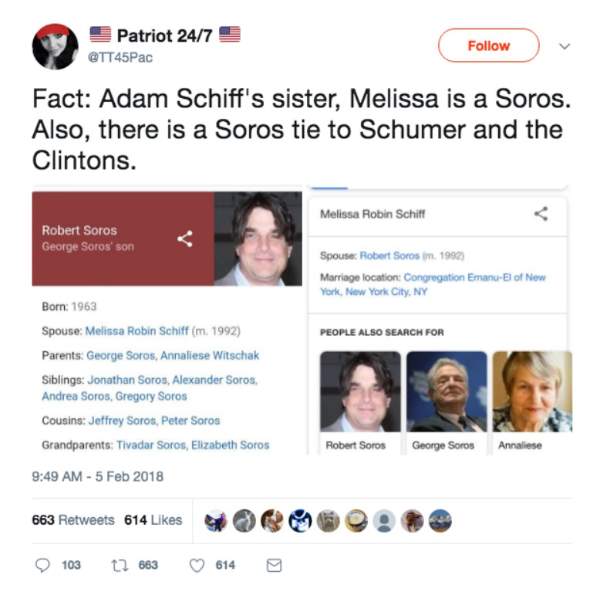 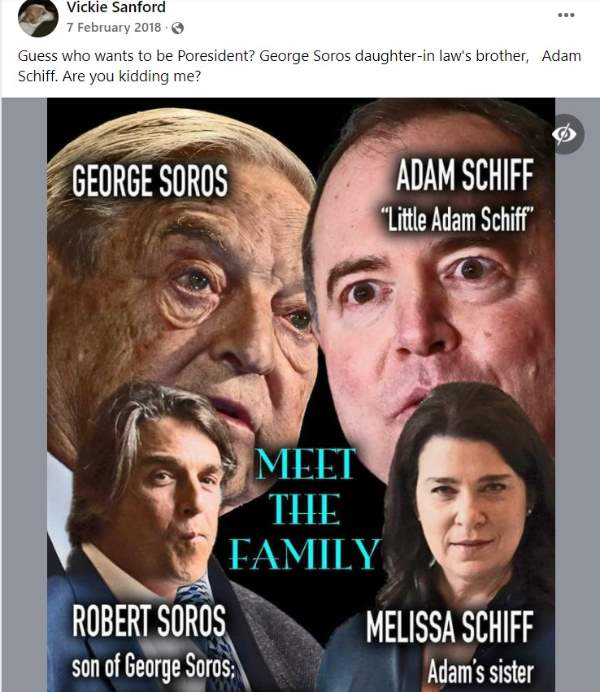 One graphic illustrated how Soros himself had become a shorthand for right-wing attacks; it only showed his face next to Schiff’s with the caption “WELL WELL WELL” and not even an attempt to push a thought: 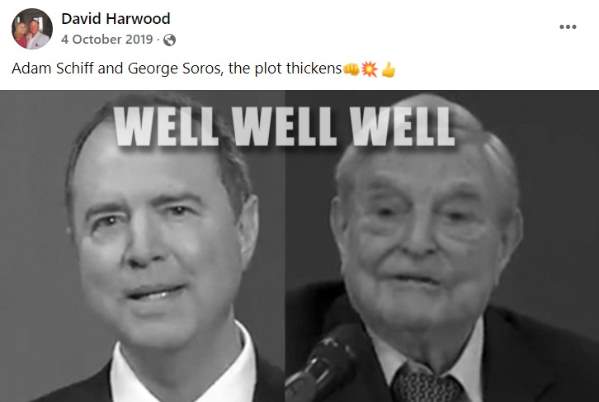 Soros’ son, Robert Soros, did marry a woman named Melissa Schiff in 1992; their wedding announcement was published at the time in the New York Times:

Melissa Robin Schiff, the daughter of Marlene S. Schiff of New York and the late Dr. Haskel Schiff, was married May 5 to Robert Daniel Soros, a son of Annaliese Soros and George Soros, both of New York. Rabbi Dr. David Posner performed the ceremony at Temple Emanu-El in New York.

However, the California lawmaker comes from an entirely different family. As his House website states:

Schiff was born in Framingham, Massachusetts to Edward and Sherrill Ann (Glovsky) Schiff. His father was in the “rag business,” selling different lines of clothing across the country, which caused the family to move first to Scottsdale, Arizona and then Alamo, California.

Schiff would go on to lead the impeachment efforts against Trump in 2019 for threatening Ukrainian President Volodymyr Zelenskiy with the withholding of $400 million in American aid in exchange for opening an investigation against Hunter Biden, son of 2020 presidential election winner Joe Biden.

Before leaving office, Trump said online that Schiff had “not yet paid the price” for his actions.

In early March 2022 the House committee — also chaired by Schiff — investigating the right-wing coup attempt perpetrated by Trump supporters in January 2021 said that they had discovered enough evidence to show that Trump “in a criminal conspiracy” to wrongfully overturn the results of the 2020 presidential election.

“Given the president was repeatedly advised that the vice president had no authority to decertify electors, that there was no basis to these bogus claims of fraud, we believe that there was that kind of a corrupt intent to interfere with the joint session,” Schiff told NPR.