Amid the latest wave of anti-LGBTQ legislation around the United States, right-wing candidates and social media boards are pushing a separate type of disinformation to gin up concerns that local students are “identifying as cats.”

In a recent example, reporter Emily R. West for WTVF-TV in Nashville noted on Twitter on April 12 2022 that local school board candidate William Holladay had promoted a version of this claim, saying on social media that “we now have schools here in the USA putting litter boxes in classrooms because some students identify as cats, and teachers being disciplined because they didn’t ‘meow’ when trying to communicate with them”:

This morning it was brought to my attention that a candidate for the Williamson County School Board is claiming that students in this country are having litter boxes placed in classrooms and speaking through meows. pic.twitter.com/UsP22Py1IF

A local publication, The Tennessee Holler, also reported on the post (which is no longer visible on Holladay’s Facebook page), adding that commenters debunked his allegation:

UPDATE: “Doc” Holladay, the Williamson County School Board @WCSedu candidate who called for a librarian’s arrest, perpetuates the LIE that students are given litter boxes and identifying as cats, teachers punished for not “meowing” to them🤦🏻🤥😵‍💫

As is often the case with right-wing disinformation, Holladay’s outburst was not unique in either concept or outcome; he published his post less than a month after a Nebraska lawmaker, state Sen. Bruce Bostelman, vowed to colleagues to investigate “wanting to put litter boxes in the schools” for students who were barking and meowing during school hours:

A floor speech from Nebraska State Senator Bruce Bostelman that "is about something called furries."

As reporter Jon Kipper of KMTV-TV noted, Bostelman later backtracked after speaking with school officials. The Nebraska Examiner further reported that both Bostelman and another state senator, Steve Halloran, had been fed rumors about student “furries,” prompting a quick debunking from educators:

“This is ridiculous,” said Dr. Josh Fields, the superintendent of the Seward Public Schools.

“It’s an ugly rumor,” said Shawn Scott, the superintendent Adams Central, which issued a statement on Feb. 18 shooting down the rumor.

Rebecca Kleeman, a spokeswoman for Millard Public Schools, said she is unaware of any incidents involving furries or requests for litter boxes.

And these “rumors” themselves are regurgitated, as can be seen in how they were referenced in a meeting of the Midland Public Schools board in Michigan in December 2021 by a local woman, identified as Lisa Hansen:

“Yesterday I heard something, and I was stunned, and today I am equally stunned and a little bit upset. Well, not a little bit, a lot a bit upset — furious; I would even use that word,” Hansen said. “I heard that at least one of our schools in our town has a, in one of the unisex bathrooms, a litter box for the kids that identify as cats. And um, I am really disturbed by that.”

As the Washington Post reported, Hansen’s claim was quickly recycled by the co-chair for Michigan’s Republican Party: 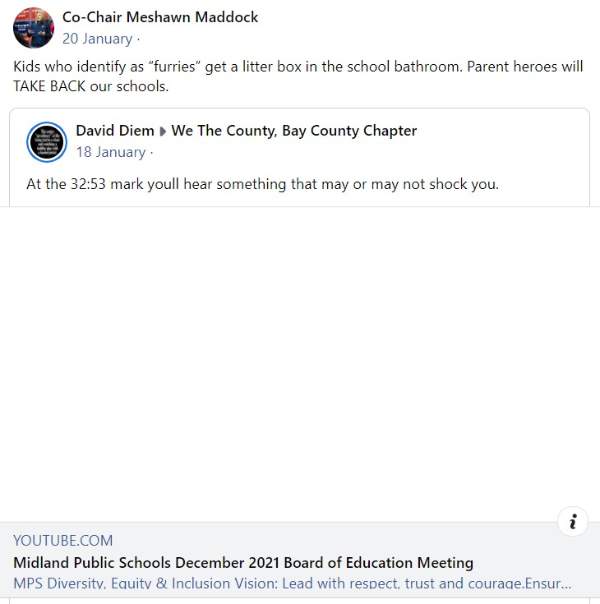 The Canadian Broadcasting Corporation (CBC) reported on similar allegations as far back as October 2021. In this case, administrators from the Public Schools Branch district in Prince Edward Island issued their own takedown of the “furries” rumor:

For several months now, the Public Schools Branch has fielded calls, been sent emails and been pointed to numerous social media posts that make broad sweeping assertions regarding students who identify as cats. Many of these assertions claim that schools have or are in the process of having litter boxes placed in schools. This claim as well as many others are simply false and are causing unnecessary stress to students and staff. The Public Schools Branch supports all students and their personal expressions, however, such conjecture is not helpful and contravenes our Safe and Caring Learning Environment Policy. Concerns related to student matters should be addressed at the school level.

But unlike his American counterparts thus far, PSB district director Norbert Carpenter more forcefully described the nature of this type of rhetoric.

“It seemed to me like it was a backlash against some of the progressive things that our schools are doing,” Carpenter told the CBC. “We would have many that would say this is rooted in hate and transphobia and homophobia and that message needs to be clear, it’s not acceptable.”

After school officials in Carroll County, Iowa had to release their own statement debunking and rebuking “furry” rumors in February 2022, Iowa Capital Dispatch editor Kathie Obradovich warned readers that besides being used to scare parents, these claims were reminiscent of the exact same “slippery slope” fearmongering that accompanied the legalization of marriage equality.

Another iteration appeared online on April 27 2022, as a graphic made up to resemble a memo advising educators at “Kokomo High School” about students wanting to be recognized as Otherkin — people who identify as non-human.

The fake memo states that “litter boxes will be provided” in some restrooms, and that Otherkin students “will be provided 5 extra minutes between periods to allow free movement on all fours”: 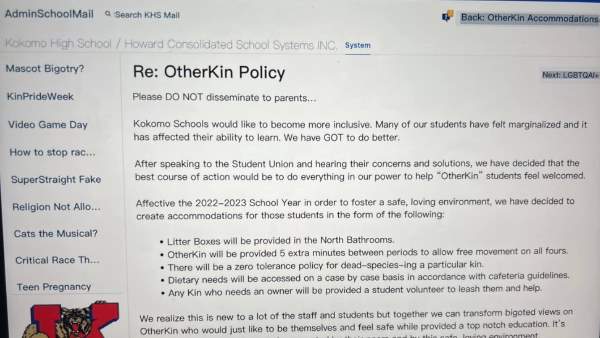 In reality, the graphic was posted by a “satirical” website set up to resemble actual local announcements.

Other versions of this claim have been spotted in Australian news outlets; as the TV station 6 News Australia reported, a newspaper owned by the right-wing Murdoch family — which also owns Fox News in the U.S. — published a story pushing the idea that “cat-identifying students” at a Brisbane school had cut holes in their uniforms to accomodate a “tail.”

The Australian Broadcasting Corporation program Media Watch aired an analysis of the piece, noting that it was an op-ed based on what the author, Kylie Lang, described as “several unrelated sources,” including one unidentified woman who claimed she had heard about these “students” at a dinner party. Media Watch host Paul Barry also pointed out that Lang herself wrote that the school “had not been made aware” of any students identifying as cats.

“And what about those cat-identifying students in Brisbane?

Well, like The Courier-Mail, we have been unable to find any. But if you see any around, please let us know.” #MediaWatch pic.twitter.com/Zoxfb67ihe

“Wow. Three unnamed sources with second- or third-hand knowledge and no photos, no videos, or first-hand testimony to back up the claims,” Barry said, adding that the newspaper cited the video of Hansen’s testimony in Michigan to back up its story without disclosing that Hansen’s narrative had been debunked.

News 6 reported that, much like in the U.S., Australian lawmakers picked up on another Murdoch-owned newspaper’s claim that an eighth-grade private school student in Melbourne “identifies as a cat, and as long as she does her school work, the school is supporting her assumed identity”: 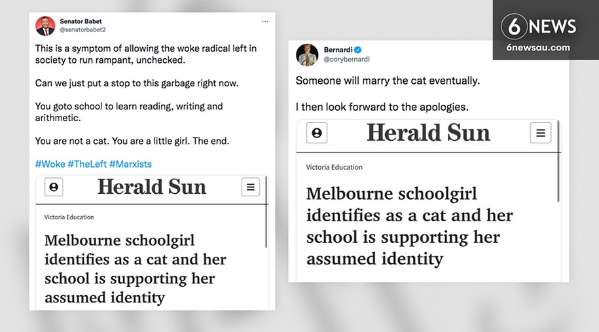 The sourcing for this claim — “a source close the family” — was also similarly shoddy, continuing the trend in stories of this nature.

As WTVF-TV reporter Phil Williams noted on Twitter, the false issue also surfaced during a September 27 2022 meeting of the Tennessee legislature’s Education, Health and General Welfare joint subcommittee, as state Sen. Janice Bowling (R) and state Rep. Mary Littleton (R) both invoked it, and as with the rest of the lawmakers, they brought it up without offering any corroborating evidence:

Yes, this happened in the Tennessee legislature this week! Rep. @78RepLittleton (R-Dickson) and Sen. @janicebowlingtn (R-Tullahoma) asked about the “growing crisis” of furries being allowed to use litter boxes in the classroom. (Spoiler: there’s zero evidence that it’s true!) pic.twitter.com/qQAnmjQH2t

After being assured that it was not happening, Bowling — the subcommittee co-chair — further made reference to the rumor while adding in a transphobic smear. Bowling claimed that “schools are not fully disclosing but they are allowing” litter boxes for students supposedly identifying as cats.

“I would hope that you continue to hold to rigorous health standards so that boys are not going into boys’ bathrooms and seeing a girl sitting on the urinal,” she added. “That’s not good. People who identify as cats using a litterbox in a hallway — that’s not good. That is not healthy for anybody in a lot of capacities.”

Update 4/27/2022, 2:44 p.m. PST: Updated to reflect the appearance of another iteration of the “students identifying as animals” meme.

Update 8/23/2022, 2:44 p.m. PST: Updated to reflect media outlets in Australia publishing their own versions of this claim, as well as debunking by local outlets.