Amid heavy criticism of breakdowns in the February 3 2020 Iowa Democratic Party caucus, a progressive congressional candidate attracted attention to himself with a claim involving a meeting between members of the Democratic National Committee and staffers for Sen. Bernie Sanders’ campaign.

“I am now hearing that the Sanders campaign sent workers to every caucus to record the live results,” Salem Snow (@Salem4Congress) wrote on Twitter. “The DNC was unaware of this. When their early tallies did not match the recorded results from campaign workers, his campaign had 5 lawyers contact the DNC. Now they’re meeting.”

The post was shared more than 4,000 times on the platform before being deleted; it was also republished by at least one Facebook user, Snow’s follow-up disclaimer — “allegedly!” — attracted far less attention. 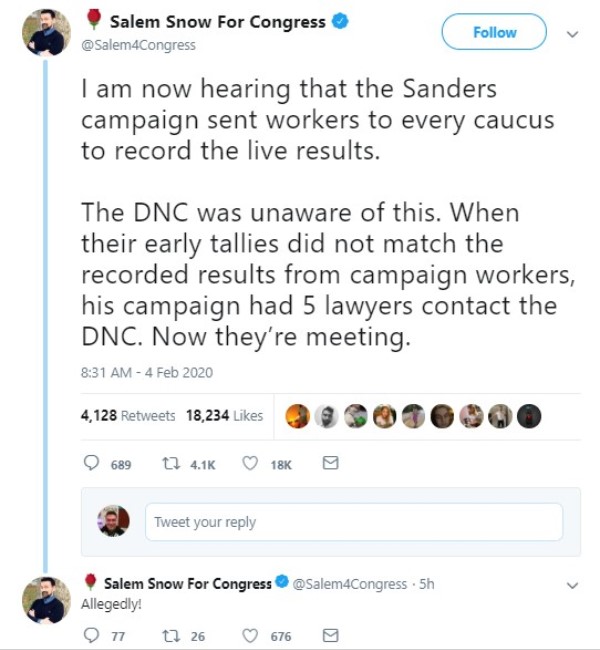 The Iowa Democratic Party began releasing results during the evening of February 4, 2020; with 62 percent of precincts reporting, Sanders had amassed the most votes out of the candidates seeking the Democratic party presidential nomination, but former South Bend, Indiana Mayor Pete Buttigieg had landed a higher percentage of delegates, gaining 27 percent to Sanders’ 25 percent.

But Snow’s various claims led to other Twitter users criticizing the congressional candidate, who is running to represent Pennsylvania’s Second District on a Democratic Socialist platform similar to the Vermont lawmaker’s.

“Perhaps I had poor wording. Let me be clear. I do not speak for the @RoseCaucus as an entity on my personal twitter,” Snow posted later. “Everything so far has been corroborated minus the number of lawyers & the meeting. However, in the future I will be careful not to post information w/o sources.”

Snow made his allegation in the midst of pervasive mistrust toward the caucus process, the results of which were delayed amid reports that an app used by the Iowa Democratic Party to tally results was suffering from result “inconsistencies” and a lack of actual training for the caucus chairs tasked to use it. We contacted Sanders’ campaign seeking comment but did not hear back prior to publication.

Meanwhile, the company that developed the app, Shadow Inc., apologized for the issues.

“We sincerely regret the delay in the reporting of the results of last night’s Iowa caucuses and the uncertainty it has caused to the candidates, their campaigns, and Democratic caucus-goers,” the company said in a statement. Shadow was paid $63,183.91 in “professional fees” in late 2019, not long after its creation:

Shadow incorporated only in September, meaning that a crucial piece of the Iowa caucus was in the hands of a company that was technically five months old. Despite serious warnings from experts, Iowa’s Democratic Party handed part of its election infrastructure to a highly networked start-up with a handful of engineers building an entirely untried app. The resulting mess shows the deeply interconnected nature of political operatives and the risks of chasing the newest new thing.

In preparation for the caucus, the Iowa Democratic Party wanted to update its reporting infrastructure, moving away from a system in which the state’s precincts would phone in results to the state party and introducing an app the precincts could use to simply upload the information. The party paid Shadow $60,000 over the past few months to develop an app called IowaReporterApp, according to financial disclosures.

But Shadow has also been met with criticism over its connections to another tech company, Acronym. As The Atlantic reported, Acronym changed the copy on its website claiming responsibility for launching Shadow to saying that it “invested in Shadow.” Acronym chief executive officer Tara McGowan reportedly has family connections to Buttigieg’s campaign: her husband, Michael Halle, is an advisor to the former mayor’s campaign; and Halle’s brother Ben Halle is communications director for Buttigieg’s Iowa campaign.