On February 4 2020,  Twitter user Ariän El-Tahry tweeted a claim that Shadow, Inc., the company that built an app used to tally votes in the chaotic Iowa caucus the day before, had received donations from groups associated with only two candidates on the ballot — Pete Buttigieg and Joe Biden:

El-Tahry cited data from the Federal Election Commission (FEC) as a source, writing:

This is how much each top-candidates donated to Shadow, Inc. — the app-developer for the Iowa Caucus.

Screenshots are for the only two who spent $ on this app.

Although he provided screenshots, it wasn’t easily possible to link directly to FEC data. El-Tahry noted that the only included screenshots were affirmative findings; candidates who donated $0 would not be listed at all, because they had not donated. Sorting through the FEC’s records is not always straightforward to the average user, and the claim was something of a subset of a larger set of ongoing rumors around Iowa caucus irregularities.

The role of an app known as Shadow and its links to another group called ACRONYM were hotly discussed amid long-delayed Iowa caucus results. A separate thread of discussion involved Pete Buttigieg’s decision to give what many interpreted as a “victory speech” the night of the caucuses — but with zero percent of precincts reporting.

A subheading on reporting by The Atlantic summarized some reaction to Buttigieg’s speech:

The former South Bend, Indiana, mayor chose to give a bold victory speech before any official results were released, undercutting his rivals.

Activist Shaun King made a similar observation in a tweet on February 4 2020:

At that point, rumors included the claim that Buttigieg or related committees had “funded” or “donated” to Shadow, Inc; El-Tahry’s tweet appeared about six hours earlier than King’s.

We retrieved records for Shadow, Inc. from FEC.gov on February 5 2020. It was not clear if Shadow, Inc. was receiving money under any other name or group tracked by the FEC. Those results matched El-Tahry’s accurately, and additionally showed only sixteen donations total to Shadow, Inc. — the earliest in April 2019.

That list was ordered by the most recent donation at the top, and the earliest at the bottom: 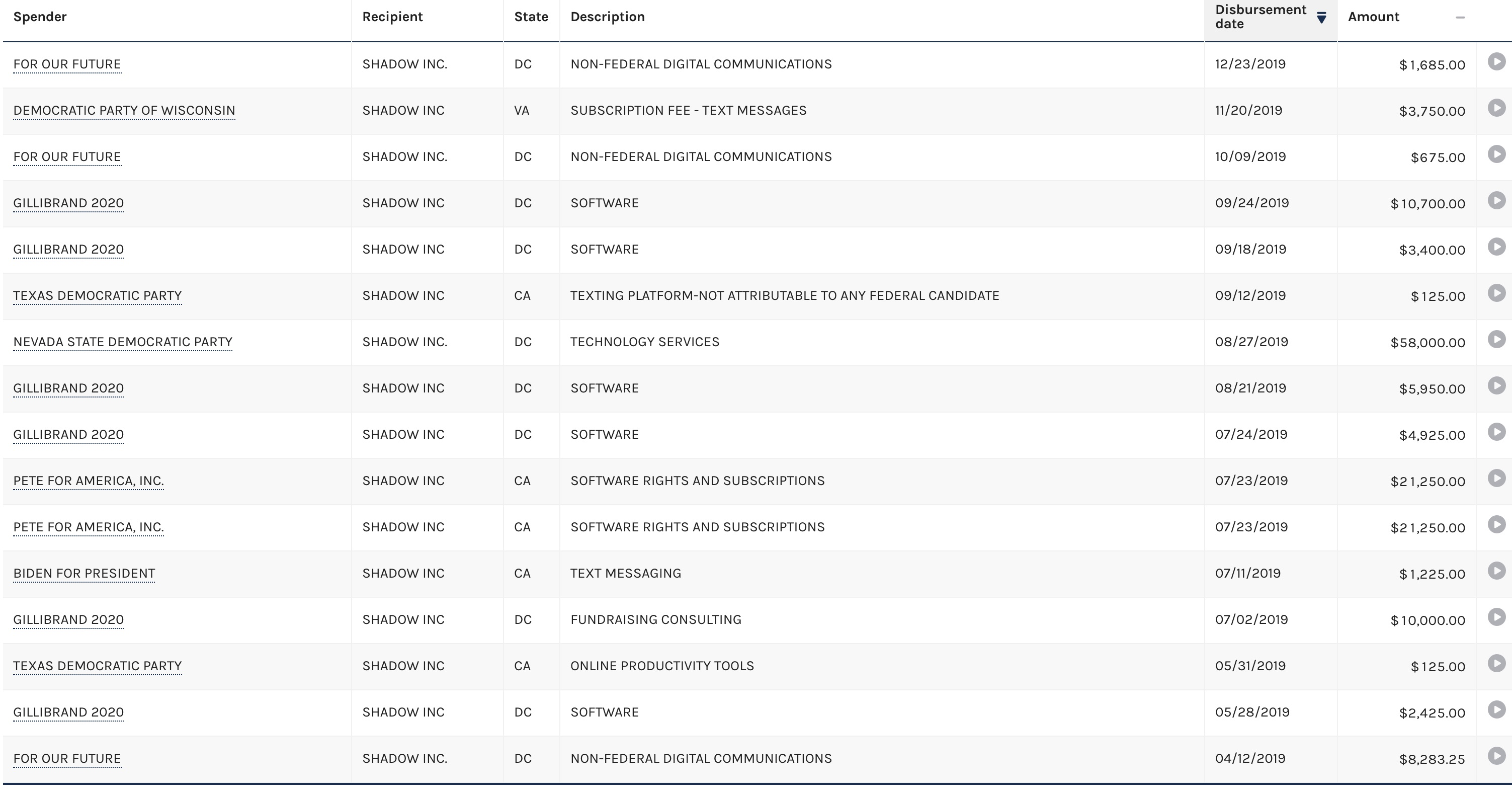 We were unable to sort by donor or amount on the FEC.gov interface, but the number of results (sixteen) was small enough to manually count them. The campaign of Kristen Gillibrand donated what appeared to be slightly more than $20,000 to Shadow, Inc. (Gillibrand was not part of the 2020 Iowa caucus.)

Each line had a different “description” field entry — text messaging, software rights and subscriptions, online productivity tools, and technology services among them. The largest sum by far was donated by the Nevada State Democratic party, at $58,000. That entry was notable due to the fact Nevada Democrats said on February 4 2020 that they planned not to use Shadow, Inc.’s product for their February 22 2020 caucuses after all.

Biden for President made the one noted donation of $1,225.00. One group called For Our Future — which Politico described in a May 2019 article as “the nation’s largest super PAC devoted to grassroots Democratic turnout” — donated more than $10,000 across three disbursements; For Our Future was co-founded by but is now “unaffiliated with” candidate Tom Steyer, who was on the ballot at the Iowa caucuses. We searched For Our Future’s disbursements on FEC.gov, but were unable to find any campaign beneficiaries.

As for Pete For America, Inc., a campaign organization of Pete Buttigieg, two disbursements from that group to Shadow, Inc. were present in the FEC data. On July 23 2019, Pete For America disbursed $21,250.00 to Shadow, Inc, for a total of $42,500.00. However, as PolitiFact points out, this does not mean that any of these candidates or their campaigns had a hand in developing the voting app:

Some claims, such as that the Iowa caucus app was funded by Buttigieg, mischaracterize what we know.

Sean Savett, a spokesman for the campaign, told PolitiFact that they contracted with Shadow for text messaging services to help them contact voters.

It was “totally unrelated” to the app Shadow built for the caucuses, he said; Buttigieg’s campaign wasn’t involved in the app’s development.

Based on FEC.gov data for Shadow, Inc., it is accurate to say that Pete Buttigieg’s Pete For America contributed $42,500.00 to Shadow, Inc., and Joe Biden’s Biden For President contributed $1,225.00. We were unable to find contributions or payments from other campaigns or affiliated groups. Although Iowa wasn’t immediately present on the list, the largest contributor to Shadow, Inc. was the Nevada State Democratic Party, to the tune of $58,000.

Update on 2/5/2020, 1:36pm: Changed “donations” to “contributions” throughout for the sake of clarification; added further information about the payouts. -bb