Summary of eRumor:
A state television station in Saudi Arabia censored the uncovered hair of Angela Merkel during a report about the German chancellor’s visit to the country.
The Truth:
Angela Merkel’s hair wasn’t censored on a Saudi Arabian television broadcast, an altered image of Merkel fueled the spread of that false report across social media.
A photo of Angela Merkel standing next to King Salman with censored hair first appeared at a Facebook page operated by Saudi news site Khase News with the caption, “Just for fun…” 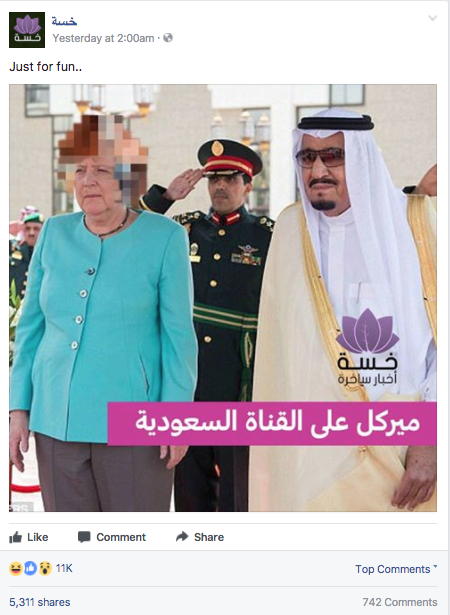 Rumors that Angela Merkel’s uncovered hair was censored took flight when a woman named Sarah Abdallah, who identifies herself as an independent Lebanese geopolitical commentator in her bio, tweeted the image with the caption: “Not a joke: the UN’s newest member of the Women Rights Commission censored the German chancellor’s hair when she appeared today on Saudi TV.” 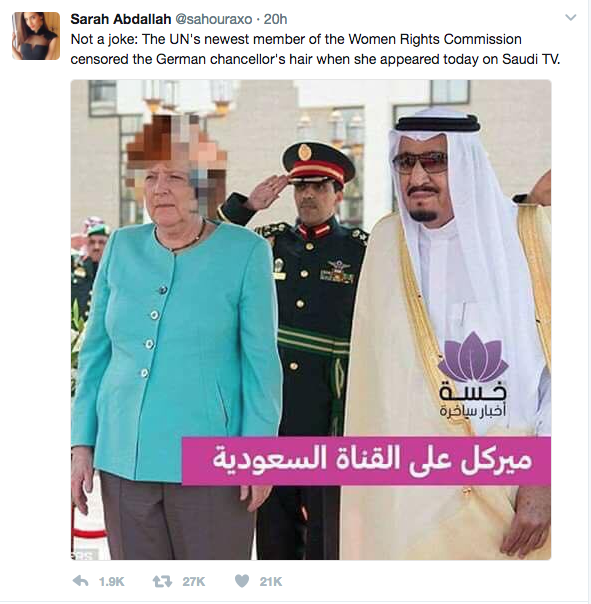 The post quickly went viral and was more widely shared than the original post, which made clear that it was meant to be a joke. Angela Merkel made international headlines for visiting Saudi Arabia without the Islamic country’s strict conservative dress code, which includes a burqa head covering, the U.K.’s Independent reported:

German Chancellor Angela Merkel arrived in Saudi Arabia without a headscarf for talks with the oil-rich kingdom’s monarch.

Ms Merkel was greeted by King Salman and other top officials upon her arrival at the western city of Jiddah.
Like other recent female Western visitors, the German Chancellor did not cover her hair upon arrival in the conservative Islamic kingdom.
Angela Merkel’s decision to not wear a burqa coincided with her backing of legislation to make the wearing of burqas in public illegal “wherever possible” in Germany. In fact, German Parliament approved a partial burqa ban just before Merkel traveled to Saudi Arabia.
Given Angela Merkel’s public opposition to the burqa and open defiance of traditional Saudi dress traditions for women, many believed the digitally altered photo that appeared in Abdallah’s Twitter feed was real. However, screen shots of actual footage from Saudi state television prove that Merkel’s hair wasn’t censored: 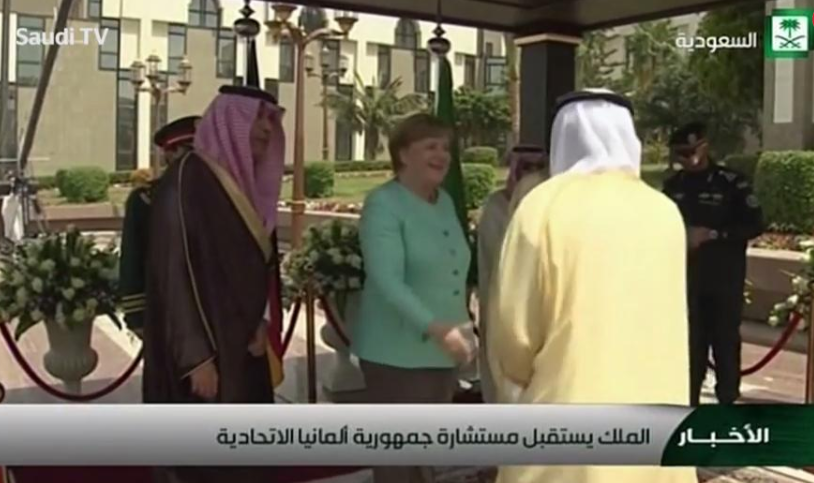 So, Angela Merkel attracted international headlines for appearing in Saudi Arabia without a head covering or burqa, but claims that Sauid state television censored Merkel’s hair are false.