An image depicts Sen. Mitch McConnell posing in front of a Confederate flag.

In early January 2019, an image that appears to show Sen. Mitch McConnell (R-Kentucky) posing in front of a large Confederate flag while receiving what appears to be either giving or receiving an award surfaced to circulate on social media: 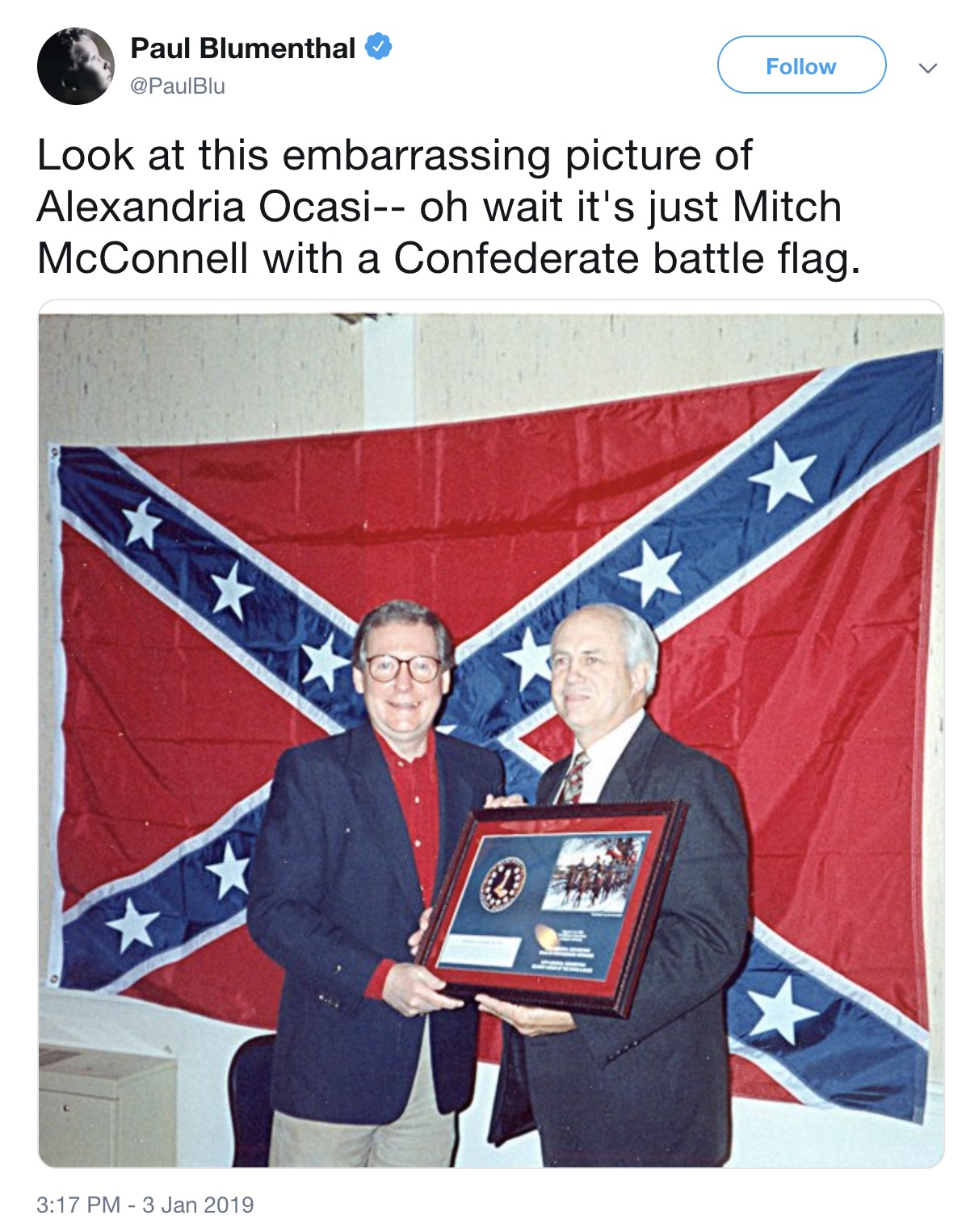 Alongside a photograph of McConnell and a Confederate flag, the tweet read:

The reference in the tweet to Rep. Alexandria Ocasio-Cortez almost certainly had to do with flap about a viral video of the new Congresswoman dancing in a years-old college video.

Although shares of the tweet approached the six-figure mark, the image was not newly discovered in early 2019. In February 2017, the Twitter account @KYDems shared the same photograph, retweeted at that point more than 12,000 times. Two years before that, an opinion piece published by the right-wing Daily Caller pointed to the image in a critique of McConnell’s calls to remove the Confederate flag from public spaces, quoting a blog post written by a Sons of Confederate Veterans chaplain:

The image was taken in the early 1990s at the Big Springs Country Club in Louisville during a meeting of the John Hunt Morgan Camp of the Sons of Confederate Veterans.

The picture is hosted on the blog “Political Poet,” maintained by Ben Kennedy, author of a biography of St. Joan of Arc and currently chaplain of the same chapter of the SCV.

Kennedy told The Daily Caller, “Anyone who’s ashamed of what God created them to be, which includes their heritage, is ultimately denying Him. People that deny their heritage deny God. I wouldn’t be surprised if a lot more pictures of him come out, not only with the battle flag and with our group, but pictures of him with other groups, if you know what I mean.”

The Daily Caller’s piece referenced a statement issued by McConnell about the debate over removing the Confederate flag from public spaces throughout the South:

Senate Majority Leader Mitch McConnell (R-Ky.) said [in June 2015] that the Confederate flag should not only be removed from near the Charleston state Capitol but also from all states around the country.

“The Confederate Battle Flag means different things to different people, but the fact that it continues to be a painful reminder of racial oppression to many suggests to me at least that it’s time to move beyond it, and that the time for a state to fly it has long since passed,” McConnell said in a statement. “There should be no confusion in anyone’s mind that as a people we’re united in our determination to put that part of our history behind us.”

Debate over the Confederate flag appeared alongside discourse over whether to remove other Confederate monuments from public spaces. McConnell was also criticized by proponents of those symbols for his position on monuments in Kentucky:

Citing that Kentucky was not part of the Confederacy during the Civil War, Senate Majority Leader Mitch McConnell (R) also called upon Kentucky to remove the statue. “Well, with regard to my own state, curiously enough, we have a statue of Jefferson Davis in the Capitol in Frankfort,” McConnell said. “Davis’s sole connection with Kentucky was he was born there and subsequently moved to Mississippi, and Kentucky of course did not secede from the Union. So I think it’s appropriate, certainly in Kentucky, to be talking about the appropriateness of continuing to have Jefferson Davis’s statue in a very prominent place in our state capital.”

McConnell added, “Maybe a better place for that would be the Kentucky history museum, which is also in the state capital.”

A purported photograph from the 1990s of Mitch McConnell posing in front of a Confederate flag circulated in 2015, 2017, and 2019, each time attracting new attention. McConnell has not commented on the photograph, which bears no obvious signs of manipulation or doctoring.

We contacted the Sons of Confederate Veterans John Hunt Morgan Camp and McConnell’s office for comment, but we have not yet received a response.