On May 12 2020, the following image of small children separated by “chalk squares” on a playground during the COVID-19 pandemic began circulating: 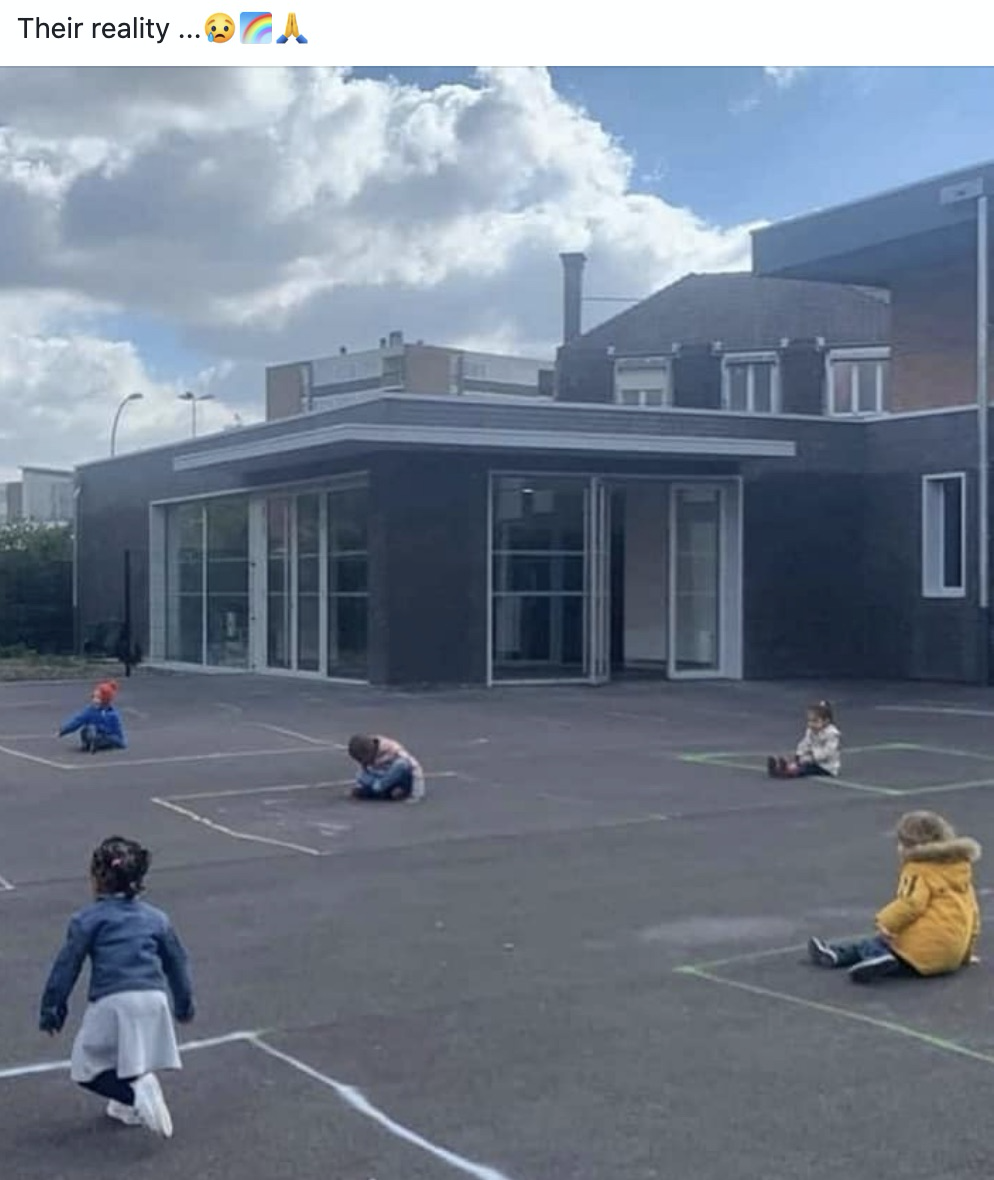 In a caption on the above iteration, the user wrote “Their reality …😢🌈,” but did not include any contextual information about the image or the events it showed. In it, five seemingly lonely children were seen in the photograph, each confined to the inside of their own chalk square.

One of the five in the upper right corner sat at the edge of her square, her legs outside the boundary. Each chalk square appeared to delineate a solitary play area for every child, and spaces between seemed to ensure the children would not come too close to one another as they engaged in socially distant playground activity.

Images of the “chalk square” children circulated concurrently alongside an unrelated viral post by “Americas Mom” on Facebook (archived here), in which a photograph of a crying woman is accompanied by a lengthy rant about the woman’s “quarantine fatigue” and ancillary concerns that her child was becoming lonely and/or irritating her.

That post began by outlining the purported social effects of quarantine on children, before devolving into a rant decrying the use of masks and disinfectant:

Written by a Mom, thank you 🙏: “I’ve had enough. People need to seriously look around and see what it’s doing to our kids. To kids too young to understand what’s going on. Kids that are by themselves with no siblings to play with, no cousins around, no friends. No secret play dates. No interaction with anyone besides mom or dad. What do you think that’s doing to our kids biologically and psychologically?

The answer is we don’t know!

But when you’re a parent you can see the hurt that your child is going through every day and you can explain to them why.. Do you know what I’ve been telling her, the truth! People are afraid of getting sick sweetheart. People are dependent on the government to protect them from everything. You might not agree with that and honestly I don’t care. Because I don’t agree with anything that’s going on right now.

Every time I get into the car with my child she begs to go someplace, crying. Should I record it for you? Should I make you hear it on the daily like I do? Will that make you change your mind?

So put a new spin on essential employees that are allowed to send their kids to childcare. These kids are allowed the ability to socially interact with one another, and have the ability to build their immune system. Nonessential employees or people that never put their child in daycare and relied on social interaction for play are now being stunted. So you’re telling us our kids are no longer essential? Our kids aren’t essential  enough to build their immune system’s or build their social connections?

You say you are not wanting to open the playgrounds because you can’t socially distance and you can’t disinfect. Where was your concern with disinfecting prior to coronavirus? Are you telling us that you never sanitized the parks before so they were riddled with viruses and bacteria that our child was going to become ill?

Open the playgrounds, stop the social distancing, stop the masks that are POINTLESS. And I swear to god if the medical professional comes on here and says I wear a mask for 12 hours a day, I’m gonna put your ass on blast. Because you do not wear a mask all throughout your 12 hour shift. Stop lying to yourself.

If you don’t agree with me that’s fine. But step the f**k out of my way while I try to fix the future for my child. Because I’ll be damned if she cries every day wanting to play with somebody or wanting to go do something and she can’t because you live in fear. Live in fear in your own f**king house.”

As for the children playing in chalk squares, that image was originally tweeted by French journalist Lionel Top on May 12 2020:

The children are coming back today (a small part of them rather). Very strange, even disturbing atmosphere …

In a second tweet, Top provided additional detail about the photograph:

Context: To ensure that distances are respected, while taking advantage of recreation, the teaching team has drawn squares on the ground for the little ones. The children play, dance, jump, laugh together … but from this square. From what we’ve seen, they don’t see it as a punishment

They learn to live together but differently. The photos are striking and most of the reactions on Twitter show the same emotion, that of a school which does not correspond to what we know, but the children this morning were not “unhappy”

A viral photograph of children in “chalk squares” after returning to school during the COVID-19 pandemic was real, shared by a French journalist on May 12 2020. Top captured the image at a preschool in Tourcoing, France, and emphasized that the children were not suffering or unhappy.