LGBTQ Pride parades were cancelled in 2020 because of COVID-19 without inspiring demonstrations.

Right-wing personality Tomi Lahren’s attempt to criticize “liberals” on Twitter was refuted when several other users pointed out that she was attempted to gin up controversy that was already moot.

“To the pro-eternal shutdown cheerleaders, when your favorite government pals start canceling pride parades, we better not hear a peep out of you!!!” Lahren posted on Twitter on May 7 2020. 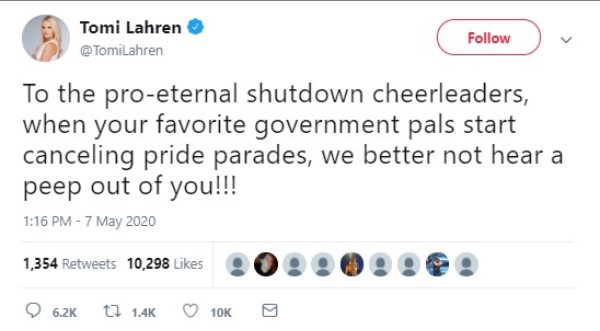 But as both PinkNews and The Daily Dot reported, other Twitter users quickly refuted her premise, pointing out that several pride festivals around the country had already been cancelled without incident in various cities.

“I was one of the announcers for the NYC Pride parade and when it was canceled we said ‘ok’ and dealt with it like fucking grownups because we care about our community,” said Samantha Ruddy, the digital producer for the comedy show Full Frontal with Samantha Bee. “Sorry you can’t go to your gun gender reveal or whatever it is you’re upset about.”

According to NBC News, 140 Pride events in the United States — and nearly 400 around the world — have been cancelled because of the COVID-19 pandemic, though two activist groups — InterPride and the Reclaim Pride Coalition — are reportedly exploring the idea of holding virtual Pride events.

To date, however, there is no record of anyone protesting stay-at-home orders lobbying for the reinstatement of Pride parades. Instead, the spate of artificially-engineered events have attracted firearm-toting people promoting Nazi iconography as well as rhetoric dismissing the suffering of others.

In June 2019, Lahren publicly supported a “straight pride parade” slated to take place in Boston, failing to mention the ties between those types of events and white nationalists. When the event unfolded on August 31 2019, the attendees were outnumbered by more than a thousand counter-protesters.