Michigan Gov. Gretchen Whitmer said that protesters at a May 14, 2020 demonstration will be arrested if they are carrying a firearm.

A British tabloid’s story on a right-wing demonstration in Michigan circulated via social media with a headline with a much different connotation than the one actually seen on its website.

For Facebook users, the Daily Mail’s story on a May 14 2020 action against the stay-at-home order imposed by Gov. Gretchen Whitmer bears the headline, “Michigan Gov. says Any protester holding firearm will be arrested”: 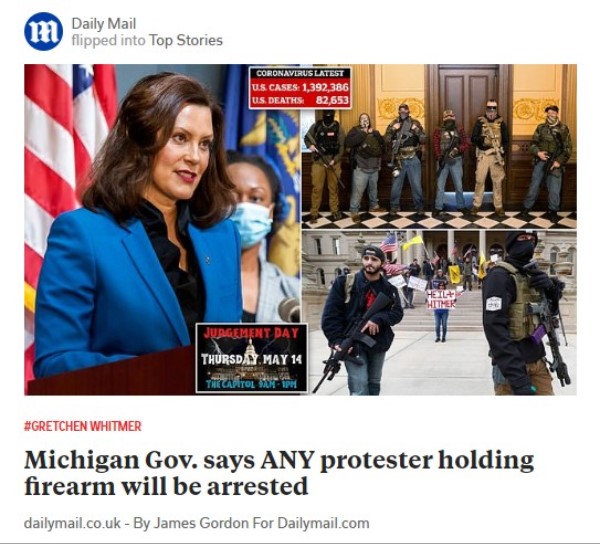 The story was shared at least 28,000 times on the platform, and its reach was also amplified by other sites and channels who republished it — sometimes attributing the piece to the Daily Mail, but sometimes not: 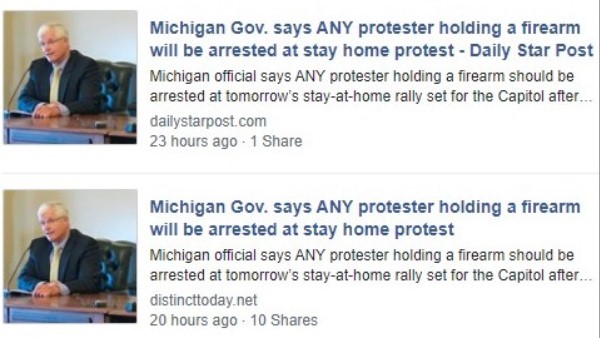 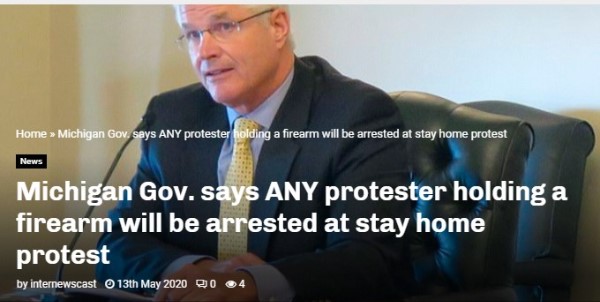 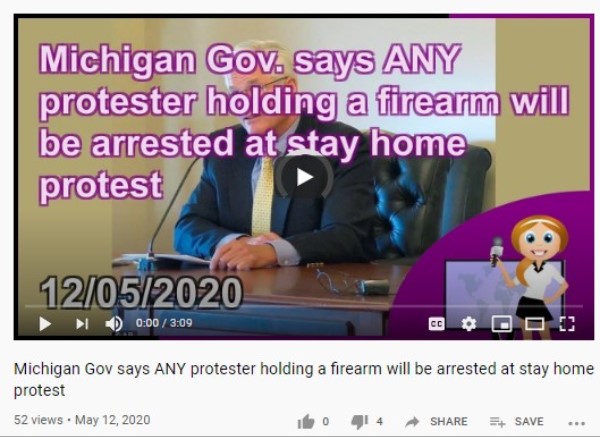 But readers who clicked on the post saw that the story’s actual headline reads, “Michigan official says ANY protester brandishing a firearm should be arrested at tomorrow’s stay-at-home rally set for the Capitol after Gov. Gretchen Whitmer received death threats,” which carries a far different connotation from the version seen online:

The Mail’s story itself does not push the claim that Whitmer ordered the arrest of any armed protesters. It does paraphrase a statement by Republican state Senate Majority Leader Mike Shirkey that was first reported by the Detroit Metro News on May 12 2020:

I am calling upon, right now, our governor and our attorney general, if those situations, where it appears they have breached the line of brandishing, that those individuals be properly handcuffed … fingerprinted and given a very longstanding photo that they can frame at home.

The protest is slated to take place at the state Capitol in Lansing; it is legal for firearm owners to carry their weapon inside the building if they have a permit. According to state law, “brandishing” a weapon illegally means pointing it, waving it around, or displaying it “in a threatening manner with the intent to induce fear in another person.”

A similar protest at the Capitol on April 30 2020 became a national story after heavily armed protesters were photographed inside and outside the building.

According to the Metro News, Democratic state Sen. Mallory McMorrow said on May 12 2020 that comments made in Facebook groups promoting the event were not about objecting to stay-at-home measures but instead about “about spreading blood on the front lawn of this building.”

“That is damn intimidating,” she said. “That is intimidation and it is not welcomed. My question back is: What the hell are we going to do about it? Or do we wait until something happens?”

The Daily Mail’s story corroborated McMorrow’s observation, as it contained Facebook comments calling for Whitmer to be assassinated. One user wrote, “I wish someone would take her out personally,” while another asked, “Can we please just take up a collection for an assassin to put that woman from Michigan down”: 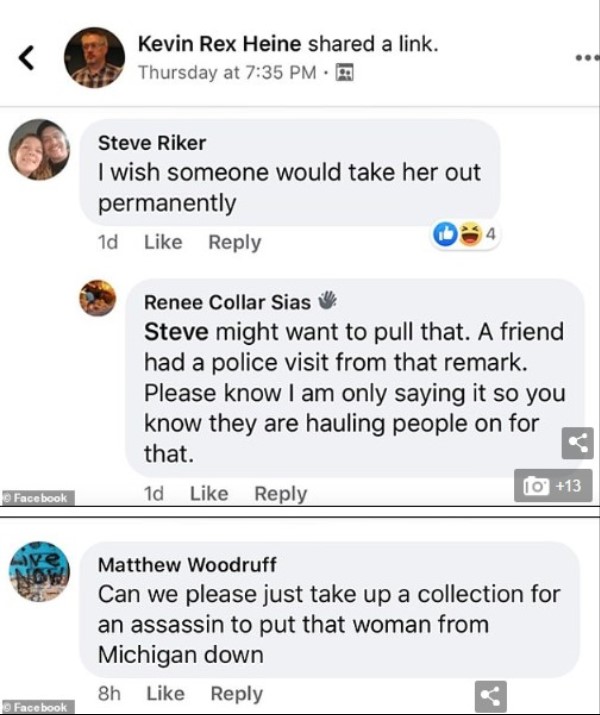 Shirkey — who has opposed the stay-at-home order — said of the people making the threats, “These folks are thugs and their tactics are despicable. It is never OK to threaten the safety or life of another person, elected or otherwise, period.”

The upcoming demonstration was reportedly organized via Facebook, much like the rash of similar inauthentically engineered events around the United States. They have attracted anti-vaccine “activists,” and attendees have openly displayed Nazi-related iconography. The organizing group, Michigans United for Liberty, has denied any association with violent threat, but it has still been removed from the platform.

The Metro News also reported that state Attorney General Dana Nessel and state police have said that they will be more proactive in dealing with protesters who engage in disorderly conduct, obstruct police activity, or brandish their weapons.

We contacted the Daily Mail seeking comment on the discrepancy between its headlines on its coverage of the protest, but have not heard back.