A photograph shows that tandem nursing a separate child on each breast leads a lactating mother to produce "two different milks" based on individual children's needs.

A March 24 2019 post on the Facebook page “Breast is Best without Fear” (archived here) featured a purported image of different milks expressed by the “same mama,” thanks to nursing children of different ages and with separate needs: 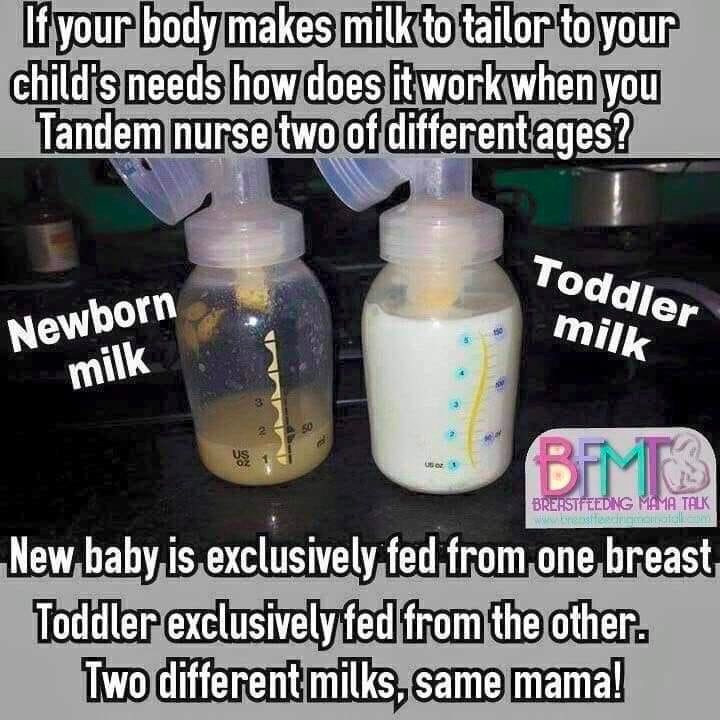 In its center was a photograph of two bottles of breastmilk — one thin and dark yellow (labeled “Newborn milk”) and one thick and white (labeled “Toddler milk”). The meme bore a logo for a nonfunctioning website (breastfeedingmamatalk.com), and text wrapping the top and bottom read:

If your body makes milk to tailor to your child’s needs how does it work when you Tandem nurse two of different ages?

Put together, the meme claimed that the photograph showed one bottle (on the left, “newborn”) of milk expressed from a single breast, and another (“toddler”) expressed from the same woman’s other breast, and that because the woman exclusively nursed one child from one breast and another from the other. In other words, according to the claim, each breast had somehow produced developmental and age-appropriate milk independent of the other breast.

It was also understandable that some readers might infer that the meme suggested tandem nursing was a term meaning “to produce separate milks in separate breasts for individual children.” In fact, tandem nursing simply means breastfeeding two or more infants concurrently, and it is usually associated with multiple births or non-twin siblings.

Tandem nursing examples include: the nursing of two separate children simultaneously (at the same time), ongoing nursing involving children born at the same time (twins, triplets, or multiples), and breastfeeding both an infant and a toddler simultaneously or concurrently. Accepted definitions of tandem nursing do not include discrete milk production in individual breasts belonging to the same lactating woman.

The meme’s central premise, then, involved the effects of tandem nursing sequential siblings (not twins or triplets) at different developmental stages, and the purported accommodations of milk production during that period of time. In the first few days of an infant’s life and their mother’s milk production, breasts produce a form of breast milk known as colostrum for a brief period to accommodate several of the very specific needs of a newborn:

Colostrum is high in carbohydrates, high in protein, high in antibodies, and low in fat (as human newborns may find fat difficult to digest).

It has a mild laxative effect, encouraging the passing of the baby’s first stool, which is called meconium.

This clears excess bilirubin, a waste product of dead red blood cells which is produced in large quantities at birth due to blood volume reduction, from the infant’s body and helps prevent jaundice.

Colostrum contains large numbers of antibodies called “secretory immunoglobulin” (IgA) that help protect the mucous membranes in the throat, lungs, and intestines of the infant.

Colostrum also looks much like the bottle on the left in the photograph. La Leche League International (LLL or LLLI) has a page on tandem nursing during and after pregnancy addresses concerns about milk supply fluctuations and differing nutritional needs in infants and toddlers. It does not, however, say that each individual breast belonging to an individual woman operates like adjacent soda fountains dispensing Pepsi or Sprite:

Women who breastfeed while pregnant often find their milk supply decreases around the fourth or fifth month (sometimes earlier than that). The composition of your milk will also change slightly. These changes are associated with normal hormonal changes during pregnancy, and nursing more frequently or pumping won’t increase production in the same way it would do if you were not pregnant. If your breastfeeding baby is less than a year old, watch his weight gain to be sure he is getting enough to eat. It’s also not uncommon for the flavor of your milk to change. These changes may prompt some older toddlers to nurse less often or to wean entirely.

Some mothers express concern that their toddler may be taking milk meant to nourish their baby. These mothers may take comfort in the fact that breasts are marvellous things that can adjust their production to meet the demands placed upon them–if they are asked to produce enough milk for two, they usually can! Also, most toddlers breastfeed considerably less frequently than an infant, and get most of their nutrition from other foods.

That information is reiterated by Breastfeeding USA, which explains that toddlers “can benefit from the nutrient-dense colostrum (though you might notice some looser-than-normal stools for a bit) and the mature milk that follows.” No mention is made of different milks in different breasts. And La Leche League UK advises parents concerned about newborns receiving sufficient colostrum to nurse the younger child first, and to encourage babies to feed from one breast before switching to another.

A popular blog focused on breastfeeding claims that women can produce twice as much milk as they tandem nurse — but again, it made no mention of the “different milk from different breasts” claim:

Another aspect of milk production was the well-known relevance of foremilk and hindmilk, which co-exist in the same breast and are differentiated by their names:

Foremilk is the milk available when your baby starts feeding, hindmilk is the milk your baby gets at the end of a feed. Foremilk is not necessarily low in fat: fat content of the milk that is removed varies according to how long the milk has been collecting in the ducts and how much of your breast is drained at the time.

As milk is made, fat sticks to the sides of the milk-making cells and the watery part of the milk moves down the ducts toward your nipple, where it mixes with any milk left there from the last feed. The longer the time between feeds, the more diluted the leftover milk becomes. This ‘watery’ milk has a higher lactose content and less fat than the milk stored in the milk-making cells higher up in your breast.

In the course of a feeding, individual breasts can express both foremilk and hindmilk, distinguished from one another both by consistency and through the process by which both are produced:

Your milk also changes gradually over the course of a single feeding. The milk you express at the beginning of a session has a thinner consistency, relatively high volume, and low fat. This is known as foremilk. By the end of a breastfeeding session, the high-fat hindmilk is thicker, richer, and creamier.

Discussions about foremilk and hindmilk make it sound like your body produces two different forms of nutrition. The answer is much simpler. You only make one kind of breastmilk, but the milk passes through fine ducts in your breast to reach the nipple. At the beginning, some of the fat clings to the walls of the ducts. As the feeding continues, more of this fat makes its way through with the rest of your milk. There’s no magic number of minutes for foremilk to “switch” to hindmilk. The fat content increases gradually and naturally throughout the feeding.

We were unable to find any information supporting the claim made in the meme — that the “same mama” can produce different milk in separate breasts when tandem nursing children of different ages, or that a single breast can produce foremilk while the other produces hindmilk.

Moreoever, the top comment on the post above was from a woman saying she took the photograph of her own milk:

For fucks sake. This was my milk, when I was pregnant and nursing with one kid who would literally only breastfeed off of one side for 18 months, went through a nursing strike so I pumped both sides. This was long before his sister was born. It was shared privately in my LLL group and has been spread with misinformation for 5 years now. Please delete this image.

We contacted the commenter about her response, and she confirmed that she took the photograph of the two separate milks in 2013. She added that the image was taken while she was pregnant (not when she was nursing a newborn), and that her second child was not yet born.

The meme’s central claim about “two different milks” from the “same mama” is not supported by science. Although tandem nursing is both real and not disruptive to a breastfeeding relationship with a newborn, the image does not accurately represent the manner in which a lactating body handles separate requests from two separate nursing children of different developmental ages.