Donald Trump won an overwhelming 7.5 million popular vote victory in 3,084 of the country’s 3,141 counties or county equivalents in America’s heartland.

Fifty-five point seven million out of the 109.3 million Americans who cast their ballots in those counties voted for Trump, while only 48.1 million voted for Hillary Clinton, according to the latest county by county election results reported at Politico. The remaining 5.4 million voted for other candidates.

County-by-county breakdowns of 2016 election returns show that Donald Trump won 3,084 counties — but many of them were rural and sparsely populated. A map that Breitbart published with its story showed the vast majority of the country colored red for Trump — but it failed to take into account the distribution of voters. The University of Michigan created this graphic to demonstrate county-by-county returns based on population density, not geography: 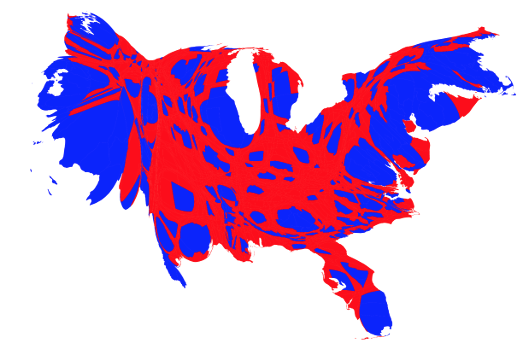 The point is that election results are based on the sizes of populations, not geographical locations. And, as the Telegraph notes, the same number of ballots were cast in 163 counties (123 of which Hillary Clinton won) as in the remaining 2,939 counties in the United States. So, the claim that Trump won 3,084 counties, or a 7.5 million popular vote landslide in those areas, doesn’t take into account how many voters were in those counties:

This “heartland” they refer to is the vast areas of red on the US election results map, which is predominately rural and Republican-leaning. The key thing Breitbart miss is that while this covers a lot of land area, the actual number of voters in these counties is small, as these rural areas have lower population densities.

If we look at all the counties together and divide them straight down the main dividing line — red for Trump and blue for Clinton, as the map that Breitbart copied from the University of Michigan does — the sea of red is clear to see.

But if we take the 3,102 counties in America — excluding Alaska which doesn’t count its presidential results by county — and look at the number of votes cast in them, it quickly becomes apparent that the 163 most populous counties have exactly the same amount of voter power behind them as the 2,939 least populous — most of which backed the Republican.

This means that the same number of ballots were cast in the 163 counties that Brietbart dismisses – of which 123 voted for Clinton and 40 backed Trump – than in the other 2,939.

So, it’s true that Trump won 3,084 of 3,141 counties — but that doesn’t take into account population distribution. That’s why we’re calling this one misleading.