Two Oceans Meet But Do Not Mix in the Gulf of Alaska-Fiction! 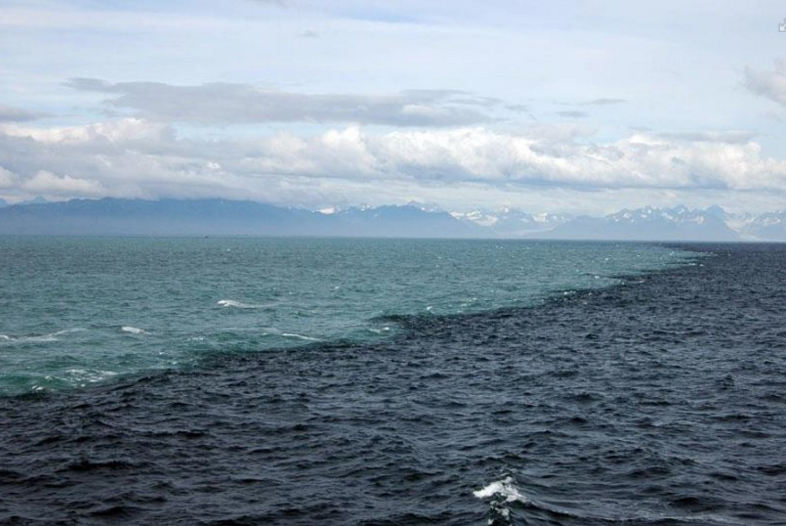 That photo does actually show the Gulf of Alaska, and the clear divide in the water is a remarkable phenomenon — but it doesn’t show where two oceans meet but do not mix. The photo was taken on a research cruise in 2007 by UC-Santa Cruz professor of ocean sciences Ken Bruland, and it shows what happens when sediment-rich water from glacial valleys flow into open seas, the Alaska Dispatch News reports:

Ken Bruland, professor of ocean sciences at University of California-Santa Cruz, was on that cruise. In fact, he was the one who snapped the pic. He said the purpose of the cruise was to examine how huge eddies — slow moving currents — ranging into the hundreds of kilometers in diameter, swirl out from the Alaska coast into the Gulf of Alaska.

Those eddies often carry with them huge quantities of glacial sediment thanks to rivers like Alaska’s 286-mile-long Copper River, prized for its salmon and originating from the Copper Glacier far inland. It empties out east of Prince William Sound, carrying with it all that heavy clay and sediment. And with that sediment comes iron.

“Glacier rivers in the summertime are like buzzsaws eroding away the mountains there,” Bruland said. “In the process, they lift up all this material — they call it glacial flour — that can be carried out.”

Once these glacial rivers pour out into the larger body of water, they’re picked up by ocean currents, moving east to west, and begin to circulate there. This is one of the primary methods that iron — found in the clay and sediment of the glacial runoff — is transported to iron-deprived regions in the middle of the Gulf of Alaska.

As for that specific photo, Bruland said that it shows the plume of water pouring out from one of these sediment-rich rivers and meeting with the general ocean water. It’s also a falsehood that these two types of water don’t mix at all, he said.

“They do eventually mix, but you do come across these really strong gradients at these specific moments in time,” he said. Such borders are never static, he added, as they move around and disappear altogether, depending on the level of sediment and the whims of the water.