The United States Postal Service listed 671 mail-sorting machines for removal around the U.S. in 2020.

States in which the USPS was ordered to remove mail sorting machines under DeJoy:
59 in Florida
58 in Texas
34 in Ohio
30 in Pennsylvania
26 in Michigan
15 in North Carolina
12 in Virginia
12 in Wisconsin
11 in Georgia

It’s no coincidence that these are all swing states. DeJoy is no postmaster general.
He’s Trump’s inside man to steal the election.
Put back the mail sorting machines! 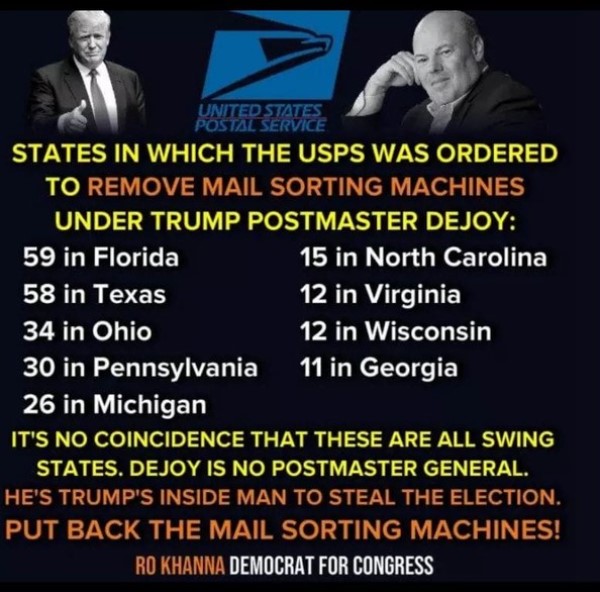 We contacted Khanna’s office seeking comment on the meme but did not hear back. However, the figures he listed have also been reported in other publications. According to the Washington Post, 671 mail-sorting machines were removed from postal offices across 49 states, as well as the District of Columbia:

The removals correlated closely with population: States with more people and, hence, a larger USPS footprint had more machines taken out. California had the greatest number, 76, followed by Florida (59), Texas (58) New York (52) and Ohio (34). Alaska is the only state with no machines on the list.

According to data provided by the union, 618 of the 671 machines were to be disconnected by Aug. 1.

The newspaper cited a grievance filed by the American Postal Workers’ Union (APWU). The news site Mother Jones published a follow-up story on August 21 2020 — the same day Khanna’s office posted the graphic — with help from the Post:

More than 90 percent of the machines have already been removed—and won’t be replaced.

Many of the machines have been removed in critical swing states: 59 in Florida, 58 in Texas, 34 in Ohio, 30 in Pennsylvania, 26 in Michigan, 15 in North Carolina, 12 in Virginia, 12 in Wisconsin, and 11 in Georgia. (This data was provided to Mother Jones by Jacob Bogage and Christopher Ingraham of the Washington Post, who have detailed removal of the machines.)

Some of the states mentioned in the meme (Florida, Michigan, North Carolina, Pennsylvania and Wisconsin) have been identified by election analysts as swing states in the 2020 presidential election, typically defined as states where the race between both major political parties is especially close, compared to Republican “red states” or Democratic “blue states.”

We contacted the union seeking more information but did not hear back.

The figures listed in the meme, however, do match those in a spreadsheet that USPS contract administration manager Rickey Dean sent to union president Mark Dimondstein dated June 17 2020 — two days after DeJoy took office. The spreadsheet, which lists “anticipated equipment reductions” by location, was posted six days later on the website 21st Century Postal Worker.

On August 24 2020, DeJoy told the House Committee on Oversight and Reform that he did not order the removal of the sorting machines, but that he did put a stop to that as well as other practices “to remove any misperceptions about our commitment to delivering the nation’s election mail.” DeJoy testified that he did not know who ordered the machines to be removed, and that the decision was made prior to his becoming postmaster general. He also refused to have the scuttled sorting machines reinstalled.

CNN reported on September 9 2020 that according to documents provided to a federal court by USPS director of processing operations Jason DeChambeau, 711 mail-sorting machines were removed in 2020 — the most removals since fiscal year 2016. DeChambeau said in written testimony that the decision to do so was reached prior to DeJoy assuming his post, citing a mail decrease caused by the COVID-19 pandemic.

DeJoy has been criticized throughout his tenure for being a fundraiser for Trump and other Republican candidates prior to being appointed postmaster general. That criticism intensified in September 2020, when the House Oversight Committee opened an investigation on him following reports that he pushed employees to donate to GOP candidates and then reimbursed the workers for the donations, which would be a violation of federal law. A spokesperson for DeJoy told the Post that he “believes that he has always followed campaign fundraising laws and regulations.”

The concerns over DeJoy’s impact on USPS service stretched into the final day of the U.S. elections on November 3 2020, as federal District Judge Emmet Sullivan ordered the agency to “sweep” its facilities searching for unsent ballots by 3 p.m. EST that day. However the agency said that it could not meet the deadline.