"Venice in quarantine" COVID-19 picture depicts dozens of flamingos on a quiet canal.

Quirky or uplifting news was in high demand as the COVID-19 pandemic dragged on, which was likely the reason that a Facebook post (“Venice … in quarantine,” archived here) purportedly showing flamingos in the deserted canals of Venice, Italy proved to be so popular:

The post itself was a riff on the COVID-19 or coronavirus “we are the virus” meme, which generally shows variations of plants and animals (and nature in general) returning to areas normally crowded by humans — such the canals of Venice. Commenters clearly interpreted the image as authentic and unaltered, commenting “wow,” “superb,” “AMAZING,” and “glorious.”

We initially tried a reverse image search to determine the source of the photograph, which would undoubtedly be a popular image if it were real. However, no results for the photograph were found dating back more than a few days as of May 5 2020. We were able to find the possible base photograph here.

Iterations of the Venice canal flamingos also appeared on Twitter:

However, we located the image on an Instagram aggregator — suggesting the photograph of the Venice canal flamingos possibly originated there. A late April 2020 post by @mykojaro featured the image and the following automatically translated caption:

When people stay at home, there is an opportunity for other residents of the city to express themselves. And Are you still quarantined or have you returned to normal?

That post was not shared in English; occasionally misattributions and mistranslations fuel the spread of altered images as contextual information dropped off when posts spread to other languages. In that post, the user credited another Instagram user (@hobopeeba) for the Venice flamingos image.

It appears @hobopeeba first shared the photograph of flamingos in the canals of Venice in late April 2020:

An initial clue appeared in the first words of the post: “Art 2020.” The balance of the caption appeared in both English and Russian, reading “when people stay at home, [the] city is filled with other residents.”

In the first comment we saw, a fellow Instagram user asked in English if the photograph was “real,” that is to say unaltered or not a work of creative fiction. In a response, @hobopeeba reiterated that the image was artwork: 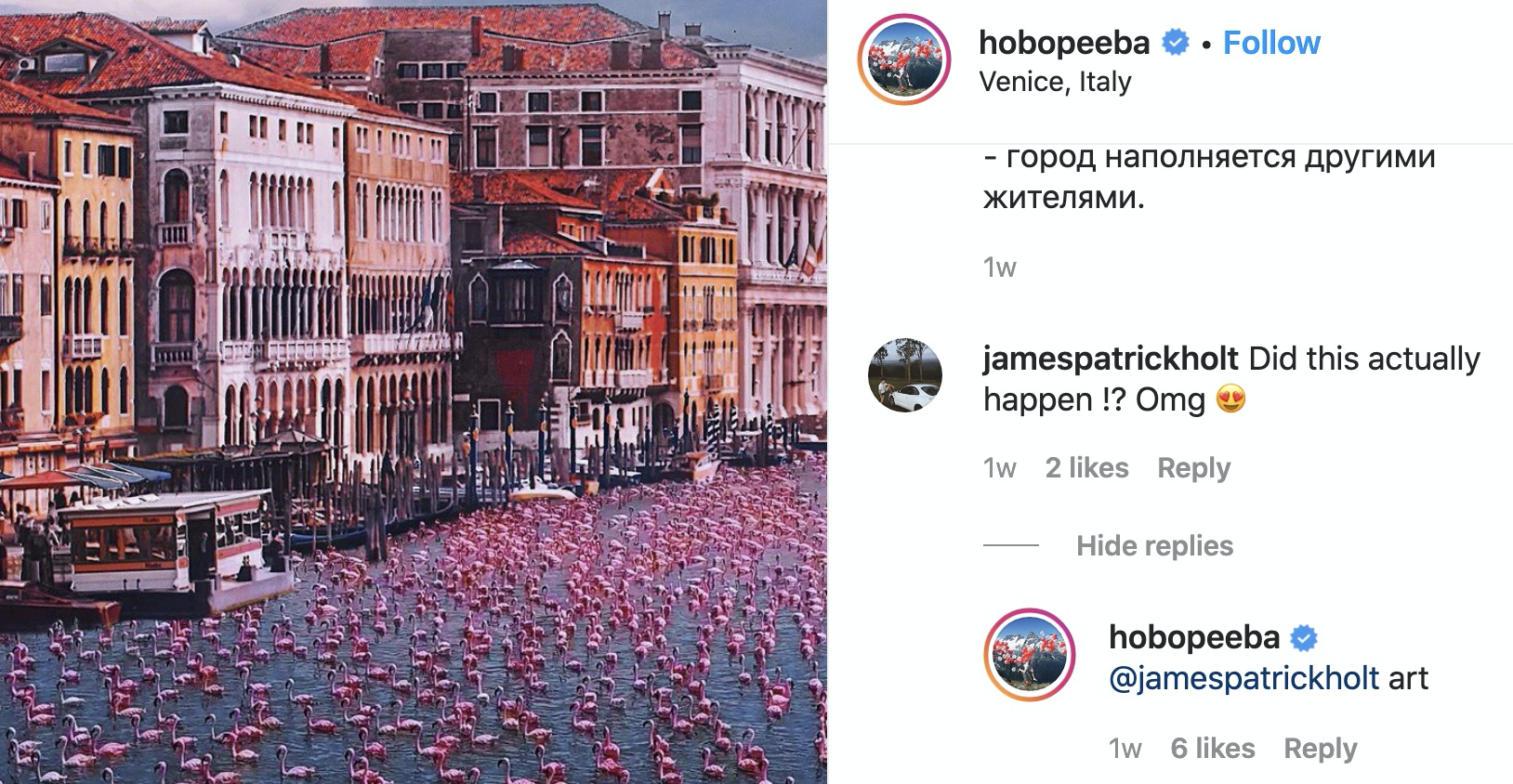 A purported photograph of a group (or a “pat“) of flamingos in the canals of Venice spread as part of a larger notion wildlife was returning to deserted cities during COVID-19 quarantines across the world. A prominent early iteration was shared without an automatic translation to English, and many Facebook users believed the image was unaltered. However, its creator @hobopeeba clarified the image was “art” created by them, not a real photograph of flamingos flocking across the quiet canals of Venice.