On May 3 2021, social media rumors that Snow White was “cancelled” by “woke mobs” began circulating, pushed along by the usual disinformation purveyors:

In the above tweet, @realDailyWire claimed that “feminists” were “outraged” over a Disneyland Snow White ride update; in a linked post, that claim was downgraded to “some women,” who seem to be less outraged than puzzled:

Disneyland, which finally reopened [on April 30 2021], has revamped its famed “Snow White” ride to include the climactic moment from the classic 1937 film in which the Prince awakens the sleeping princess with a kiss, and some women are slamming the moment, snapping, “Haven’t we already agreed that consent in early Disney movies is a major issue?”

If the story sounded extremely familiar, it was likely due to the fact that several astroturfed controversies over purported cancellations of popular childrens’ programs and films had alreardy erupted in 2021, in what appeared to be repeated attempts to feed an inaccurate “culture war” narrative. Among rumored cancellations in 2021 were:

Google Trends data for May 3 2021 demonstrated “breakout” interest in the topic, and it also served as an object lesson into why the “cancel culture” trope was so commonly invoked by the same sites over and over again.

The New York Post chimed in with one part in a series about “cancel culture”: 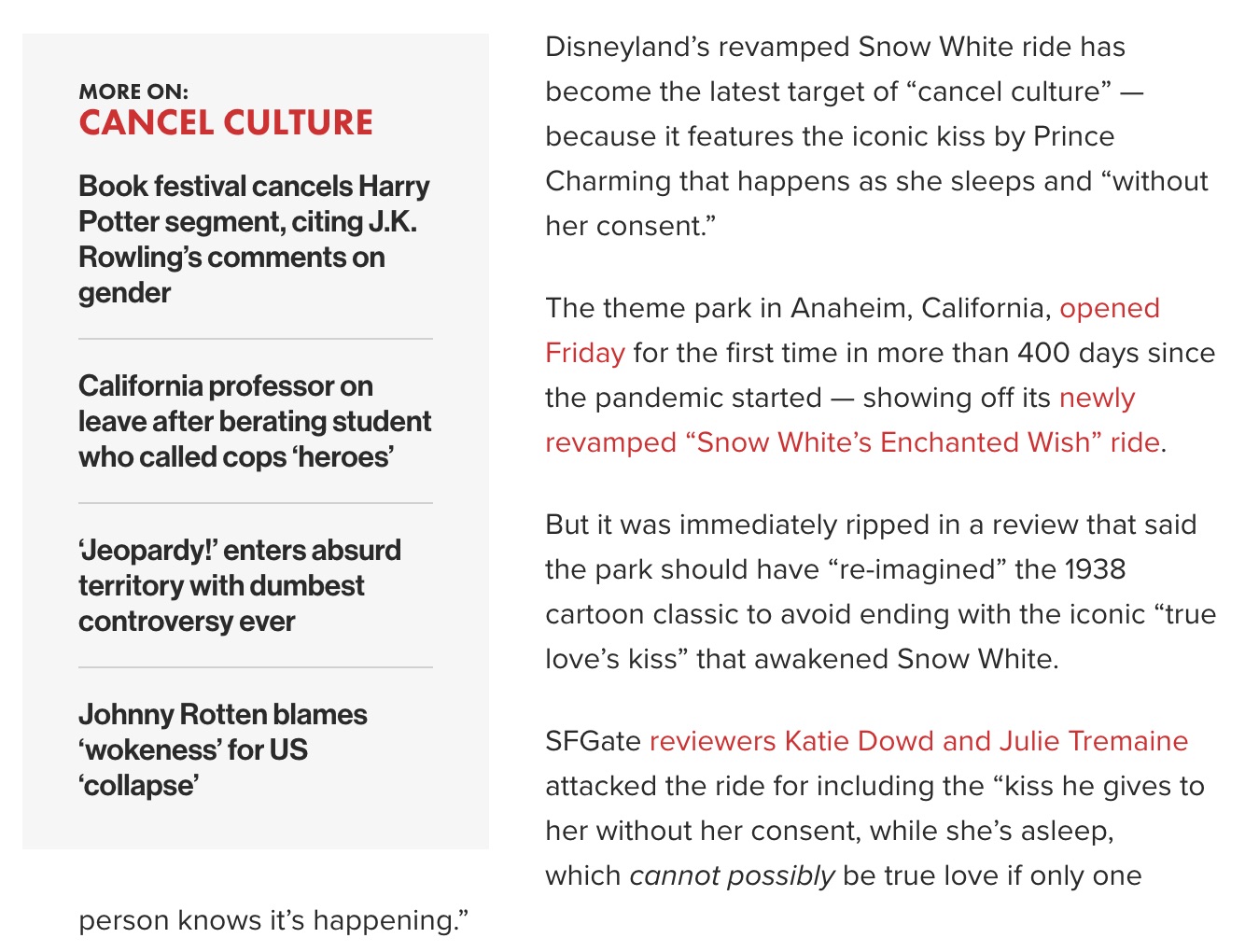 Incidentally, we noticed that story cited the same two authors on a single review — clocking a grand total of two individuals and one single complaint:

Disneyland’s revamped Snow White ride has become the latest target of “cancel culture” — because it features the iconic kiss by Prince Charming that happens as she sleeps and “without her consent.”

The theme park in Anaheim, California, opened [on April 30 2021] for the first time in more than 400 days since the pandemic started — showing off its newly revamped “Snow White’s Enchanted Wish” ride.

But it was immediately ripped in a review that said the park should have “re-imagined” the 1938 cartoon classic to avoid ending with the iconic “true love’s kiss” that awakened Snow White.

SFGate reviewers Katie Dowd and Julie Tremaine attacked the ride for including the “kiss he gives to her without her consent, while she’s asleep, which cannot possibly be true love if only one person knows it’s happening.”

We decided to see whether there was more “outrage.” The Daily Mail‘s coverage featured a lengthy title:

Will Snow White be canceled next? Revamped ride at Disneyland sparks backlash over ‘true love’s kiss’ scene because ‘she is asleep and not able to give the Prince consent’

Once again, titular claims that Snow White was the target of “cancel culture” was followed by a reference to one review by SFGate (along with a widely-excerpted portion of that one piece):

[‘]A kiss he gives to her without her consent, while she’s asleep, which cannot possibly be true love if only one person knows it’s happening,’ noted reviewers for SFGate.

‘Haven’t we already agreed that consent in early Disney movies is a major issue? That teaching kids that kissing, when it hasn’t been established if both parties are willing to engage, is not OK?’ the critics wrote.

‘It’s hard to understand why the Disneyland of 2021 would choose to add a scene with such old fashioned ideas of what a man is allowed to do to a woman, especially given the company’s current emphasis on removing problematic scenes from rides like Jungle Cruise and Splash Mountain,’ the review continued.

‘Why not re-imagine an ending in keeping with the spirit of the movie and Snow White’s place in the Disney canon, but that avoids this problem?’

Another British tabloid, The Sun, blared in a headline:

Unsurprisingly, that SFGate review was the only material cited there too:

SFGate reviewers claim the fictional kiss was given “without [Snow White’s] consent, while she’s asleep, which cannot possibly be true love if only one person knows it’s happening.”

They wrote: “Haven’t we already agreed that consent in early Disney movies is a major issue? That teaching kids that kissing, when it hasn’t been established if both parties are willing to engage, is not OK?”

“It’s hard to understand why the Disneyland of 2021 would choose to add a scene with such old-fashioned ideas of what a man is allowed to do to a woman.

Distractify’s headline hinted the Snow White ride was at risk of being “canceled”:

In the article, “outlets” were blamed for criticizing the ride — but it was still only that one article in that one publication, SFGate:

Outlets such as The San Francisco Gate reported on the opening of the new Snow White ride, which came after roughly 400 days of closure due to COVID-19, and expressed some distaste for its new final scene. Most are aware of the story of Snow White by now, notably how the protagonist was awakened by “true love’s kiss.” That scene is prominently featured in the newly revamped attraction.

On May 1 2021, SFGate.com published an article with the headline, “Disneyland’s new Snow White ride adds magic, but also a new problem,” which was apparently the manifesto of feminist rage referenced by all those stories.

Perhaps the blogs and tabloids referencing the piece didn’t expect readers to click through and read it. Perhaps they didn’t read it themselves. Anyone who did would surely have taken note of its very first lines:

Let’s get this out of the way first: Snow White’s Enchanted Wish, the revamped ride that replaced Snow White’s Scary Adventures in Disneyland, is really good. The attraction preserves much of the charm of what originally opened in 1955 at the park’s debut, but gives it a more cohesive storyline that’s true to the 1938 movie. It also adds in the movie’s biggest problem — but we’ll get to that in a minute.

The [Snow White] ride, one of Fantasyland’s original attractions, got a major upgrade, with new audio and visual technology installed throughout, including LED black lighting, laser projections, new music and a new animation system. The colors are punched up in a major way, and the new imagery is stunning, especially in the scenes where the Seven Dwarfs are mining for gems. Those scenes are reminiscent of Seven Dwarfs Mine Train in Walt Disney World’s Magic Kingdom, a thrill ride that also includes a similar glittering mine scene.

The best part of the remake, though, is that Disney’s Imagineers still retained some of what made Snow White’s Scary Adventures so iconic: Namely, the scene where the Evil Queen is looking in her magic mirror, and turns around to reveal a terrifying old witch instead.

SFGate.com included quotes from Dave Caranci, manager of creative development at Walt Disney Imagineering, and addressed whether the ride was too “scary” for some park-goers. Finally, seven paragraphs in, the review continued:

The new ride includes a more comprehensive storyline — but that’s also the problem. The new grand finale of Snow White’s Enchanted Wish is the moment when the Prince finds Snow White asleep under the Evil Queen’s spell and gives her “true love’s kiss” to release her from the enchantment. A kiss he gives to her without her consent, while she’s asleep, which cannot possibly be true love if only one person knows it’s happening.

Haven’t we already agreed that consent in early Disney movies is a major issue?

The reviewers opined it was “hard to understand why the Disneyland of 2021 would choose to add a scene with such old fashioned ideas of what a man is allowed to do to a woman, especially given the company’s current emphasis on removing problematic scenes from rides.” But the review concluded:

Still, with the twinkling lights all around and the gorgeous special effects, that final scene is beautifully executed — as long as you’re watching it as a fairy tale, not a life lesson.

Nowhere did we see calls to “cancel” Snow White or the ride, nor did the reviewers insist or even suggest that Disneyland alter the ride in any way, and the article began and ended with strong praise for the updated attraction. It is true that the review described a kiss without consent involving a sleeping Snow White, but the “feminist outrage” began and ended in the widely quoted portion excerpted above.

On May 3 2021, a number of familiar proponents of “cancel culture” controversies brayed that Snow White was canceled, with “feminists” described as “outraged.” Every single one of the articles we located about the controversy based their entire story on one single short, inconsequential observation in one single review from SFGate.com — that’s it. The review opened and closed by praising the updated ride, and not only did it not request any action (such as a change to the ride), at no point did the piece include any content remotely approaching “canceling” Snow White. The claims were wildly out of context, with sites grasping at straws and copying from one anothers’ work in what appeared to be little more than a transparent bid to increase traffic using thinly-sourced outrage bait.

Because each of these stories so misrepresented the critique, its wording, who wrote it, and what they concluded, we rate the claim a solid Not True.