The Florida merchant claiming credit for United States President Donald Trump’s remarks concerning the use of disinfectants as a “cure” for COVID-19 has a history of pushing other conspiracy theories despite legal and journalistic investigations into his practices.

Mark Grenon’s Facebook page shows a flurry of activity both before and after Trump broached the subject during a briefing on April 23, 2020 and as the Guardian reported, Grenon has claimed that he sent a letter to the president pushing his use of chlorine dioxide bleach (sold by his group under the name “miracle mineral solution,” or MMS for short) as a cure for the disease.

It is unclear whether Trump read any correspondence from Grenon, the self-styled “archbishop” of the Genesis II Church of Health and Healing. But Grenon took particular notice when the president said, “I see the disinfectant where it knocks it out in a minute. And is there a way we can do something, by an injection inside or almost a cleaning? It would be interesting to check that. That you’re gonna have to use medical doctors with.”

“Trump has got the MMS and all the info!!!” Grenon wrote. “Things are happening folks! Lord help others to see the Truth!” 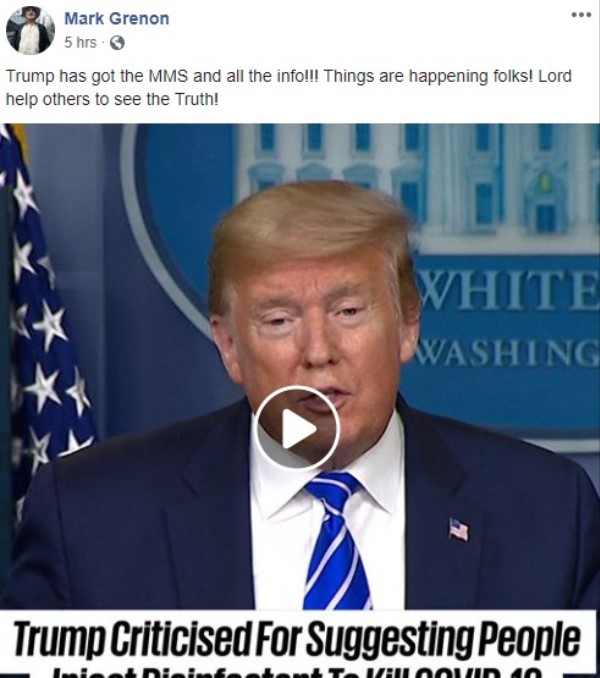 The president would later claim that he was being “sarcastic” when he asked the question. Grenon has not addressed that statement.

In the hours surrounding the briefing, though, Grenon used his Facebook page to spread various debunked comspiracy theories. For example, one post claimed that “Researchers demand aborted babies for coronavirus experiments”: 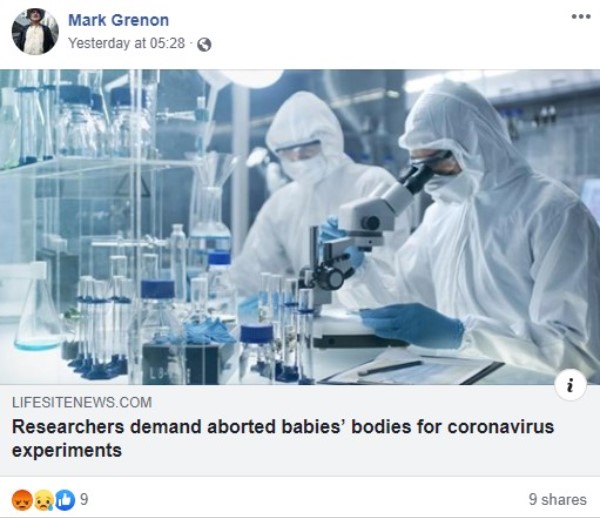 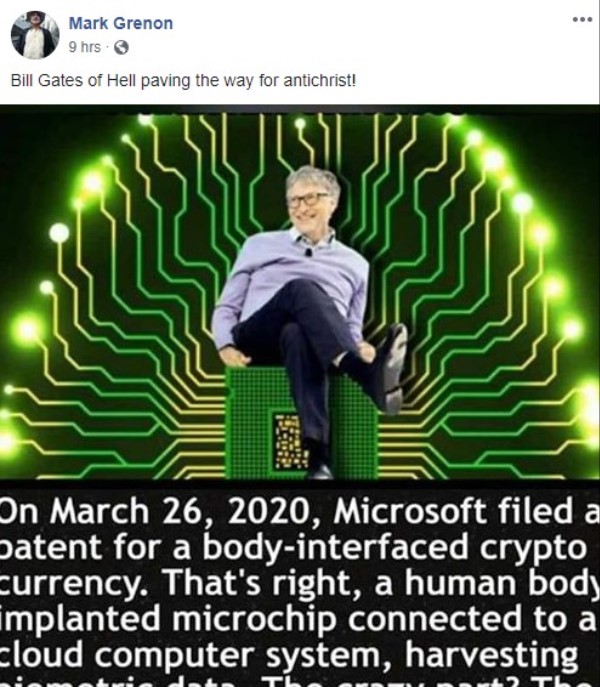 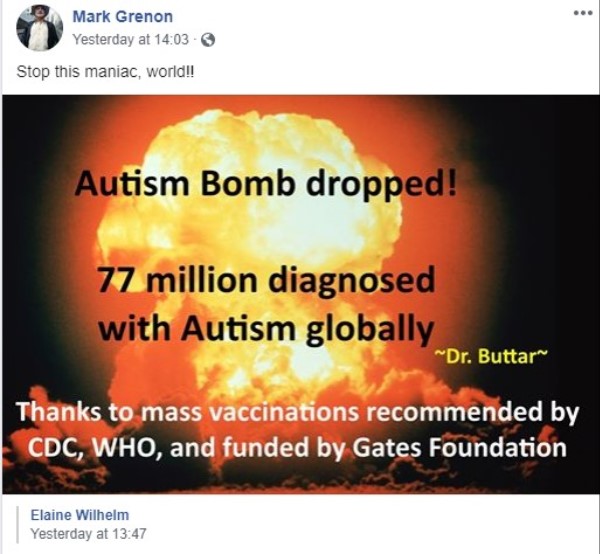 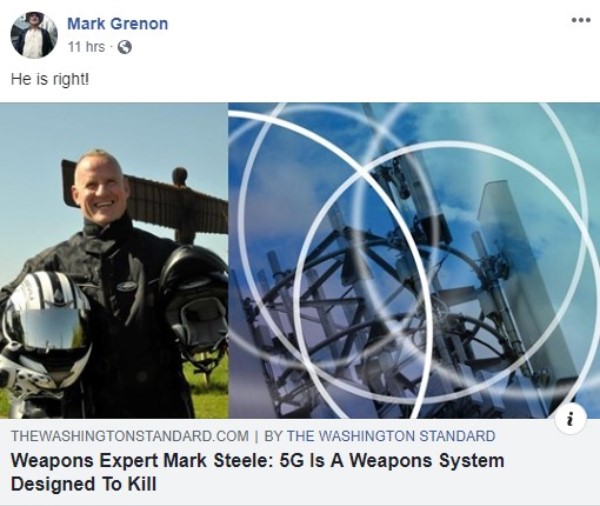 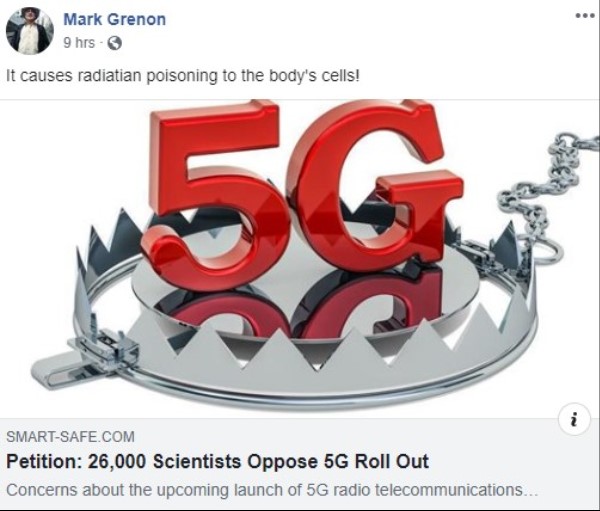 Besides advertising bleach as a cure for COVID-19, Grenon and his group have promoted it as a “miracle cure” for other diseases like cancer and HIV. In October 2016, ABC News reported that Grenon charged $450 for admission to sales presentations in which he called the bleach his church’s “sacrament.” Attendees were later ordained by the group as “health ministers.”

“They might as well be selling Clorox,” said a Justice Department official, Ben Mizer. “You wouldn’t drink Clorox, so there is no reason to drink MMS.”

But when confronted by the network, the church’s reputed founder and “high priest” Jim Humble seemingly disavowed its claims.

“There are certainly times I have said some things that I probably should have said differently,” Humble told ABC. “For lack of a better way to express things at the time — or because others put words in my mouth, in the past I have stated that MMS cures most of all diseases. Today, I say that MMS cures nothing.”

Grenon was more belligerent, calling reporter Brian Ross “an actor” and cursing at him instead of responding to questions.

On April 17 2020, the Justice Department announced that the Food and Drug Administration had obtained a temporary injunction halting the sale of MMS by Grenon’s group. Days before Trump’s controversial briefing, Grenon said on his online radio show that he was writing the president asking him to “step in” in response to the injunction. He also claimed that “20 to 30 people” had contacted both Trump and the FDA.

“I am praying you read this letter and intervene and look into the FDA attacking our church and its sacraments by calling them fraudulent,” Grenon said about 58 minutes into the April 19, 2020 broadcast. “They are sacred or holy to us, and we use them to keep our temples clean.”

On August 11 2020, The Guardian reported that Grenon and his son, Joseph Timothy Grenon, were arrested in Colombia for selling his “miracle cure.” Both men face extradition to the U.S on federal charges of dealing in a substance not approved for medical use.

The indictment further alleges that before marketing MMS as a cure for COVID-19, the Grenons marketed MMS as a miracle cure-all for dozens of other serious diseases and disorders, even though the FDA had not approved MMS for any use. The Grenons sold tens of thousands of bottles of MMS nationwide, including to consumers throughout South Florida, according to the allegations. They sold this dangerous product under the guise of Genesis II Church of Health and Healing (“Genesis”), an entity they are accused of creating to avoid government regulation of MMS and shield themselves from prosecution. According to charging documents, Genesis’ own websites describe Genesis as a “non-religious church,” and Defendant Mark Grenon, the co-founder of Genesis, has repeatedly acknowledged that Genesis “has nothing to do with religion,” and that he founded Genesis to “legalize the use of MMS” and avoid “going [ ] to jail.”

The trial is set to begin in September 2022.

Update, August 11, 2020 2:18 p.m. PST: Updated with note on Grenon’s arrest in Colombia and possible extradition to the United States.

Update, August 1 2022, 10:21AM PST: Updated with information on Grenon’s extradition to the United States.