However — no matter how convincing a page might appear at first glance — not everything on the internet is what it appears to be, particularly in the disinformation age. That is especially true for this particular page, which is mocked up to look like journalism advocacy, but instead trades on outrage and viral memes to rack up online engagement while putting out content riddled with antisemitic dogwhistles and thinly veiled white supremacist imagery.

A November 6 2019 post in a poll format shared by the Facebook page “Journalist Excellence Worldwide” leveraged the then-currently viral “OK Boomer” meme along with a sub-meme comparing “Boomer” to an “ageist N-word.” That got them the attention they apparently craved. Within 48 hours the poll attracted hundreds of thousands of engagements, thousands more shares, and a staggering 28,000-plus comments:

The term “boomer” is being used by Millenials [sic] and stupid little kids as an ageist slur against older, mature people. Considering this is an equivalent of the n-word, should it be banned on Facebook?

Newly viral Facebook page “Ok boomer” (created on November 2 2019) shared the poll to their page on November 7 2019. As its “Ok boomer” poll went viral, @JournalistEW shared a graphic of “approved journalists” on its Twitter and Facebook accounts on November 6 2019:

In its “best” column on the right hand side was Washington Post, CNN, the New York Times, and MSNBC. Also listed was the satire site NPC Daily, the highly questionable Palmer Report (widely regarded as left-wing disinformation), and, of course, JournalistEW.

On November 4 2019, on both Facebook and Twitter, the page “polled” social media users on whether Popeye’s or Chick-Fil-A had a better chicken sandwich. It also noted that “if you pick Chick-Fil-A you will be investigated for hate crimes” (with siren emojis):

In the comments of the poll post, the page operators at “Journalist Excellence Worldwide” urged angry commenters to call a phone number and agitated those commenting with cloaked humor about technologically inept baby boomers: 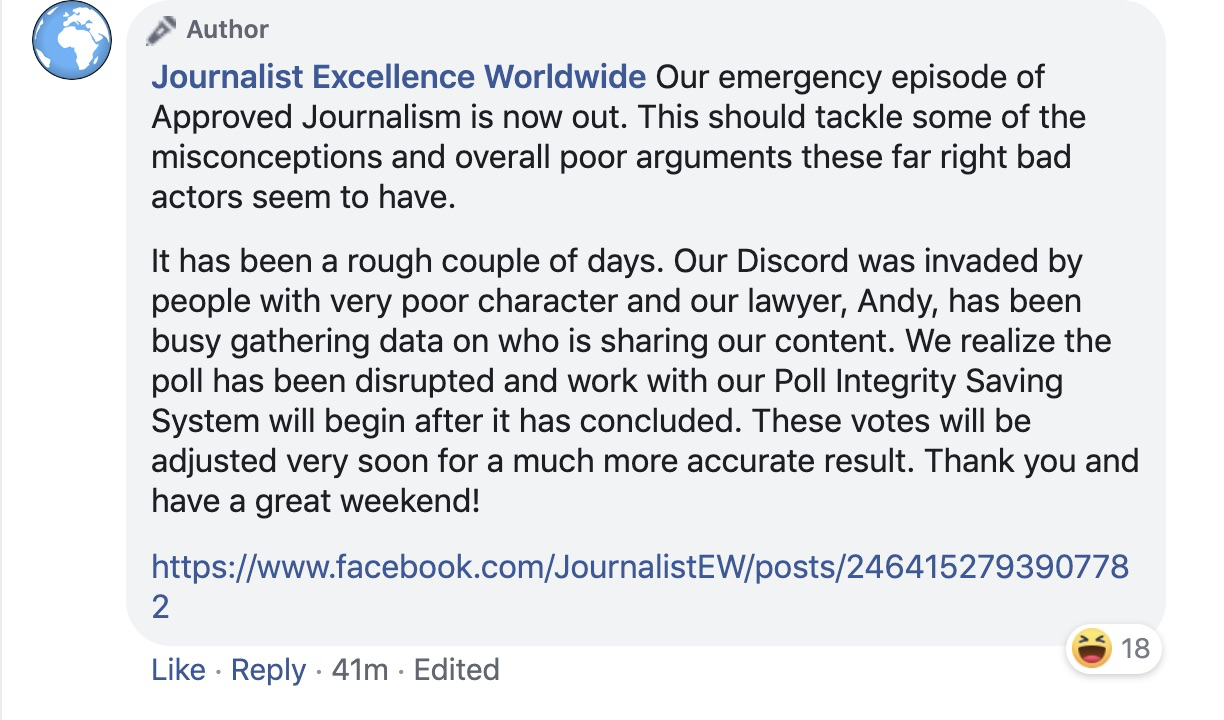 As indicated in the comment, the page shared a video around the same time, linking to “Journalist Excellence Worldwide” accounts on YouTube, Twitter, Discord, and Spreadshirt (where a variety of branded items were available for sale.)

Its Twitter page was created in February 2019, and the site JournalistEW.com was anonymously registered on February 21 2019: 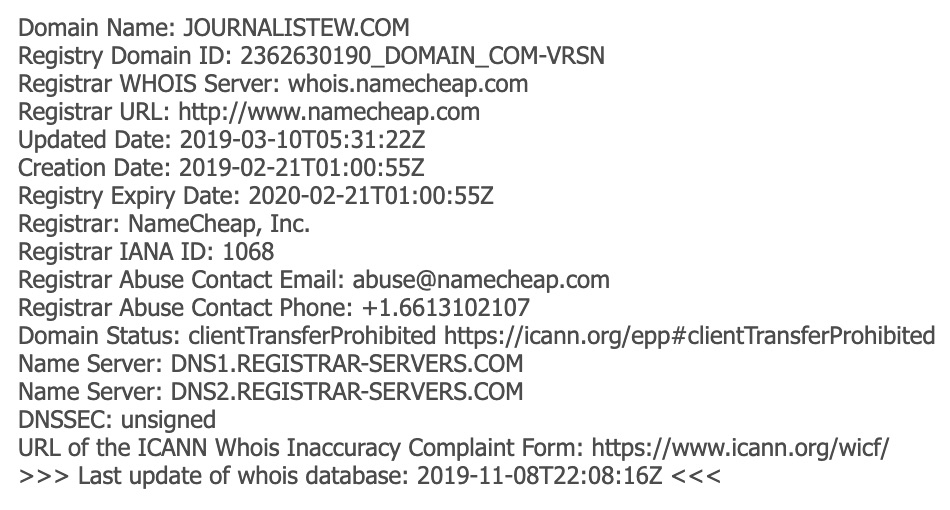 The phone number provided by the page was linked to the blogspot-hosted “Creep With Quinn” (archived here.) In the blog’s source code, text read:

New to this season is our voicemail line. You can leave comments about Wrongthink, ideas for new shows or just general comments and we will reply or play many of them in upcoming shows. The voicemail line is: 857-301-7309

Posts with embedded “Wrongthink” videos showed the clips on YouTube had since been made private, but a search for “Wrongthink,” and the names “Quinn” and “Dustin” led to a video titled “We are no longer in Boston Antifa.” It was posted to a larger “Boston Antifa” channel, featuring the same man and woman.

Far-Right trolls behind "Boston Antifa" led by Brandon Krebs now re-branding themselves for a new troll as journalists + have managed to get themselves photographed as such. As always, their "coverage" promotes echo-chamber tropes + inside far-Right jokes. https://t.co/jkprcElkjV pic.twitter.com/1IVF3x7gsA 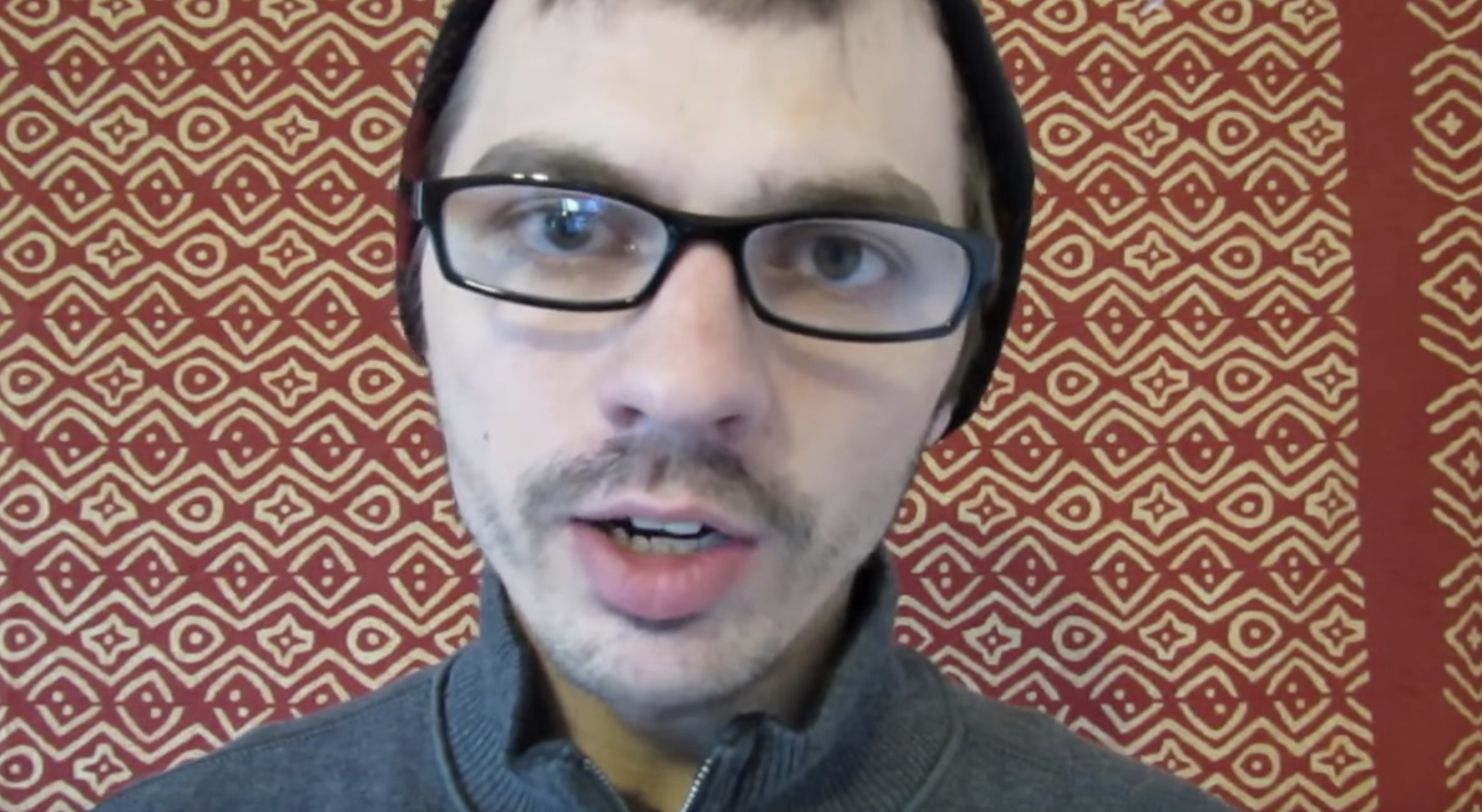 For comparison, “Dustin” bore a striking resemblance to the man in “Journalist EW” videos, such as this one uploaded on July 30 2019: 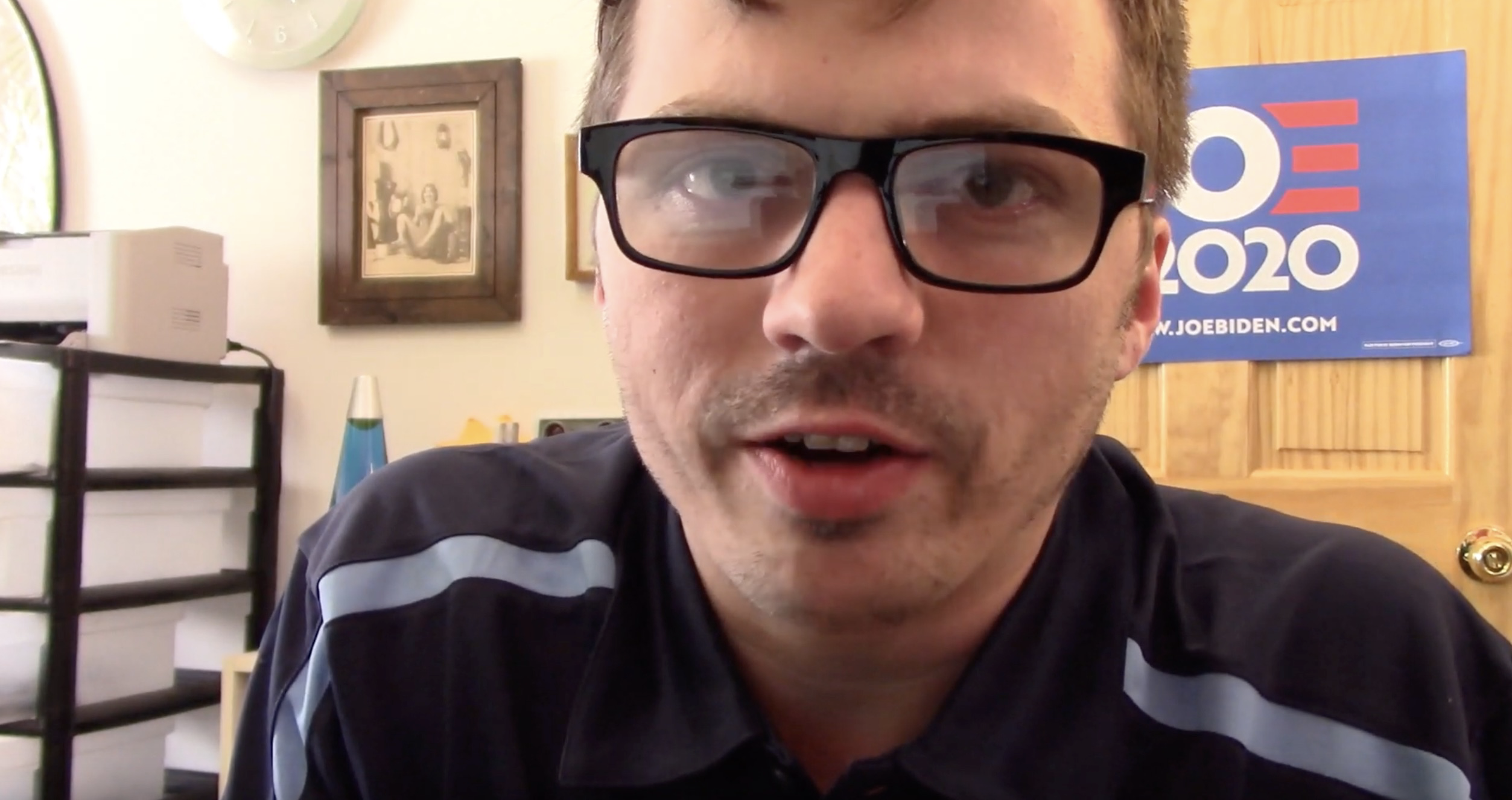 In an early March 2019 thread, another user commented that “Journalist Excellence Worldwide” should cover a 4chan debate. And in May 2019, a number of /pol/ commenters made observations about the name — with one commenter positing that a user of that forum was behind the pages:

Journalist Excellence Worldwide
>J.E.W
Oh boy am I laffin
Which one of you lads are behind this?

Commenters to the Facebook page also openly joked about its acronym:

And on that Facebook page, both of its “About” section featured a stylized swastika: 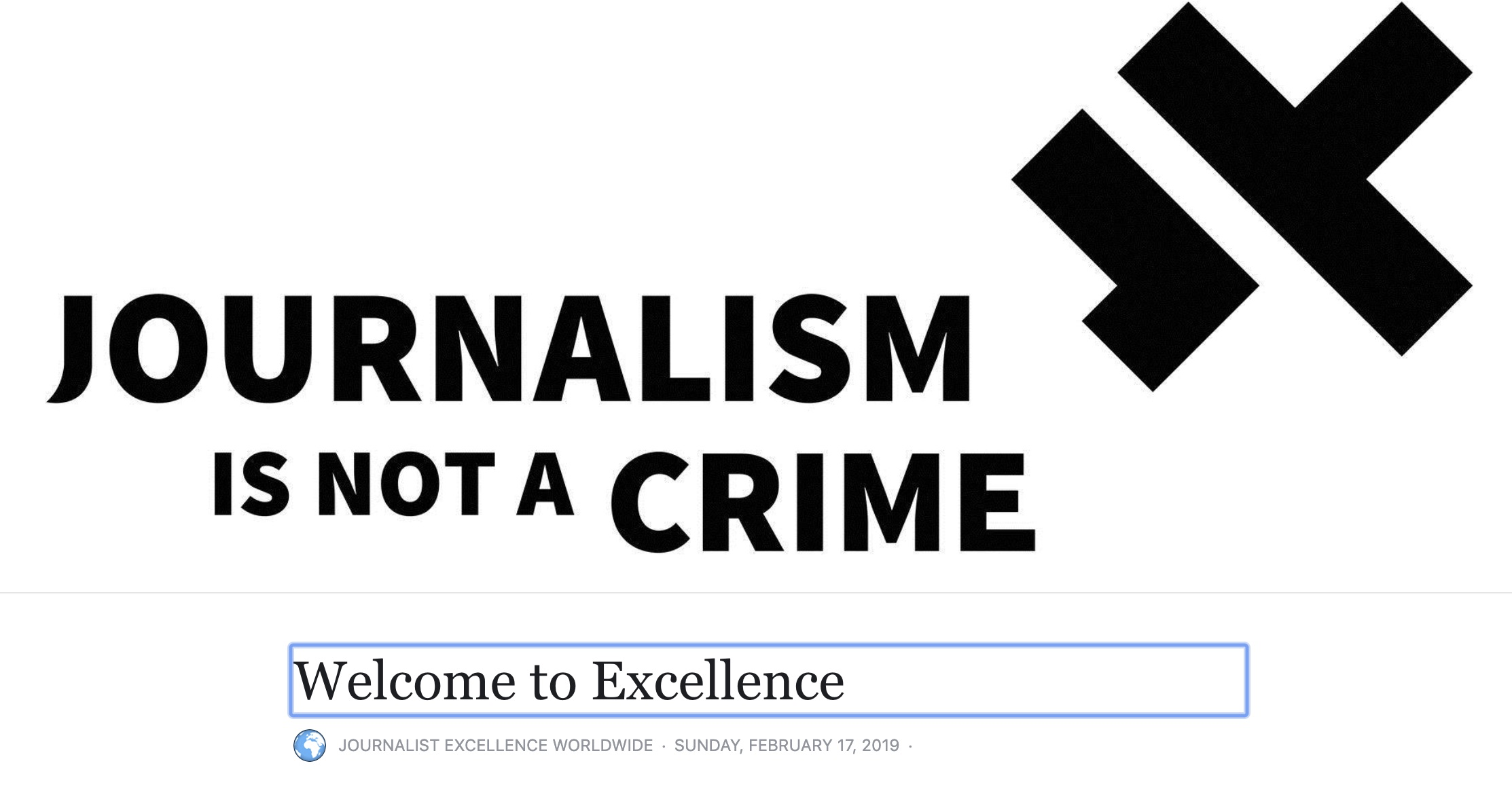 A screenshot of comments between the Journalist Excellence Worldwide page and a user spread as a meme on or around March 13 2019: 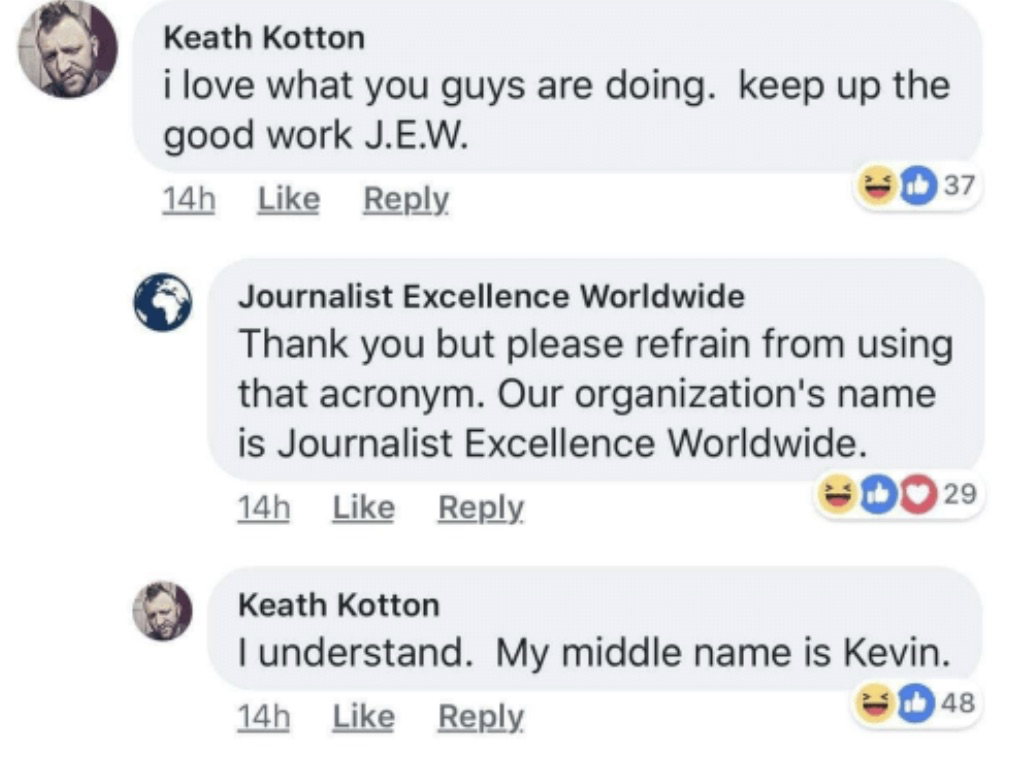 On August 8 2019, the page shared a post about the date (8/8, a nod to the white supremacist dogwhistle “88,” which stand for the eighth letter of the alphabet, H, and is widely used as shorthand for “Heil Hitler”), and asked people to consider moving their birthdays:

“Praying for all the journalists on this horrific day. Especially those of Jewish descent. Stay safe.”

“I stand with our informative, unbiased, objective journalists.
In these difficult times, we need more than just who, what, when, where, and why, and our J.E.W.’s are there to fill in all the imaginary speculation, so that we don’t have to come up with our own, wrong, impressions.”

After the viral “Ok boomer” meme took off in November 2019, the Facebook page “Journalist Excellence Worldwide” leveraged the popular meme for engagement; few people interacting with the page seemed to notice the extremely thinly veiled anti-semitism of its acronym, nor the stylized swastika on the page. “Journalist Excellence Worldwide” shares both a face and a phone number with “Boston Antifa,” which was exposed as a far-right hoax in 2017. Many of its long-time commenters are clearly in on the joke, referencing “Fourteen Words” and the number 88 in page comments.

It probably doesn’t even need to be said, but the site is not a legitimate news source; it was not created by and does not employ legitimate journalists, and it should not be treated as though it does.