Executives at ABC News told reporters and anchors specifically to not wear American flag lapel pins on the air because the network should remain as neutral as possible.

A ginned-up accusation of “unpatriotism” against ABC News in the wake of the September 11th attacks against the U.S. continued to fester online as recently as 2018, thanks to conspiracy-minded social media users.

The spread of the bogus claim was eventually enabled, as such content usually is, via a meme accusing the network of “joining” former United States President Barack Obama — a convenient boogeyman figure in conservative circles — in banning on-air talent from wearing lapel pins featuring the U.S. flag or other patriotic symbols. The graphic, written in all-capital letters, reads in part:

Their reasoning was that ABC should remain neutral about ’causes.’

Since when is patriotism to be discouraged? I urge you to boycott ABC and its sponsors and affiliates. We are slowly losing everything our country stands for and everything our men and women fought and died to preserve! 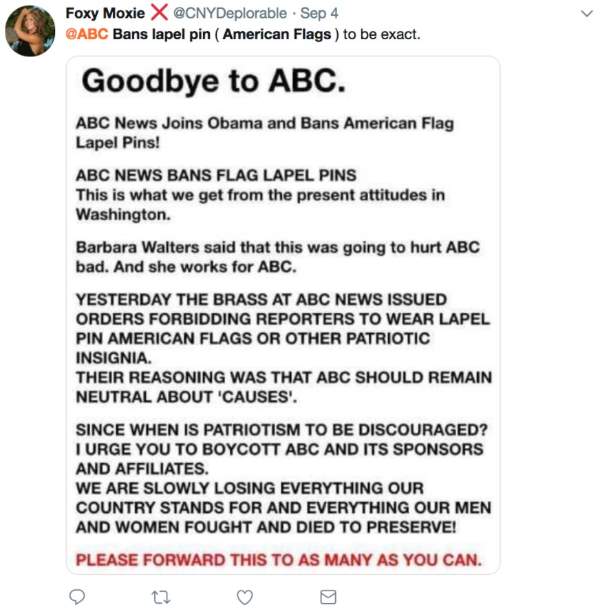 Even Time magazine spread the claim in a 2008 post highlighting how the practice of wearing flag lapel pins evolved after the attacks:

Taking a page from the Nixon Administration, George W. Bush and his aides all donned pins. So did many anchors on Fox News, though not Bill O’Reilly, who said at the time “I’m just a regular guy. Watch me and you’ll know what I think without wearing a pin.” ABC News, on the other hand, prohibited its on-air reporters from pinning on the red, white, and blue, citing a desire to maintain journalistic credibility.

In reality, the network had a policy banning the use of any lapel pin on camera even before the attacks; David Westin, who was the ABC News president at the time, told CNN in 2012:

It came up while I was in the control room. As you’ll recall, we were on the air for about four and a half days straight — 24 hours, seven days a week with no commercial interruption or anything else. There was constant reporting coming in during that time and we were having to make decisions about what to do and what not to do …

They came to us and said, “We are being asked why we’re not wearing lapel pins,” because a number of other outlets, particularly cable news, were. Fox News in particular had integrated the American flag into the backdrop and bumpers and teases and everything else. And we’d long had a policy at ABC News that we wouldn’t let people wear any lapel pins of any sort. The theory being that when you’re reporting the news, you should be reporting the news, not taking a position. I said quickly, “We’re going to stick with our policy and stand by that.” I believe to this day that was the right decision.

ABC’s White House correspondent, Terry Moran, defied the mandate, but he continues to be employed at the network, where he is currently listed as its senior national correspondent. Needless to say, the claim against the network remains false.

Obama faced similar accusations while running for the presidency when he would not wear a flag lapel pin in public appearances. In a widely-reported 2007 interview with an Iowa television station, he said that the accessories had become “substitutes” for authentic displays of patriotism.

“I decided I won’t wear that pin on my chest,” he said at the time. “Instead, I’m going to try to tell the American people what I believe, what will make this country great, and hopefully that will be a testimony to my patriotism.”

However, Obama reversed course in 2008 and began wearing the flag pins again.

“I will never question the patriotism of others in this campaign,” he said at a campaign stop in July of that year. “And I will not stand idly by when I hear others question mine.”