Proceeds from cookie sales by the Girl Scouts of America provide funding for Planned Parenthood.

Attempts by right-wing groups to gin up allegations against the Girl Scouts of the USA have centered on linking them to Planned Parenthood and accusing them of embracing “radical” concepts like reproductive choice.

In one instance, the head of the anti-choice group “Family Watch International” attracted attention in 2010 by falsely accusing Planned Parenthood of distributing a booklet promoting the idea of consensual sex at a meeting of Girl Scout members at the United Nations in New York City.

Six years earlier, a “pro-life” group out of Waco, Texas called for a boycott of Girl Scout cookie sales after a local Scout group co-sponsored a Planned Parenthood program in the area that emphasized “parent-child communication, and [gave] medically accurate and age-appropriate facts about sexuality issues,” on top of encouraging teens to abstain from sexual activity.

Pro-Life Waco, as the boycotters called themselves, were especially aghast that the illustrated sexual education book It’s Perfectly Normal was distributed to pre-teens as part of the program.

“The book, still in publication, is an assault on Christian sexual morality and is borderline pornography, if not over the border,” the group claimed.

The Waco boycott also garnered national attention, culminating in a March 2004 interview aired on NBC’s Today Show involving Kathy Clonginger, chief executive officer for Girl Scouts of the USA at the time, and John Pisciotta, who led the “pro-life” group.

Cloninger confirmed at the time that her group had stopped partnering with Planned Parenthood for that campaign:

The Girl Scouts in Waco, Texas, really made a decision based on local community context, they decided that in this particular situation that it would be in the best interest of girls and their families to discontinue the relationship with Planned Parenthood. Girl Scouts is the largest voice for, and advocate for girls across the country. Know that girls grow up with very complex issues facing them. And so we do, across the country, tackle the issues of human sexuality and body image and all of the thing that’s girls are facing. And we partner with many organizations. We have relationships with our church communities, with YWCAs, and with Planned Parenthood organizations across the country, to bring information-based sex education programs to girls.

“We will continue to partner with organizations across this nation, and local community Girl Scouts will make decisions based on their local community partnerships and the needs of their girls and their families,” she added.

However, right-wing social media users have continued to use Planned Parenthood as a way to smear the Girl Scouts: 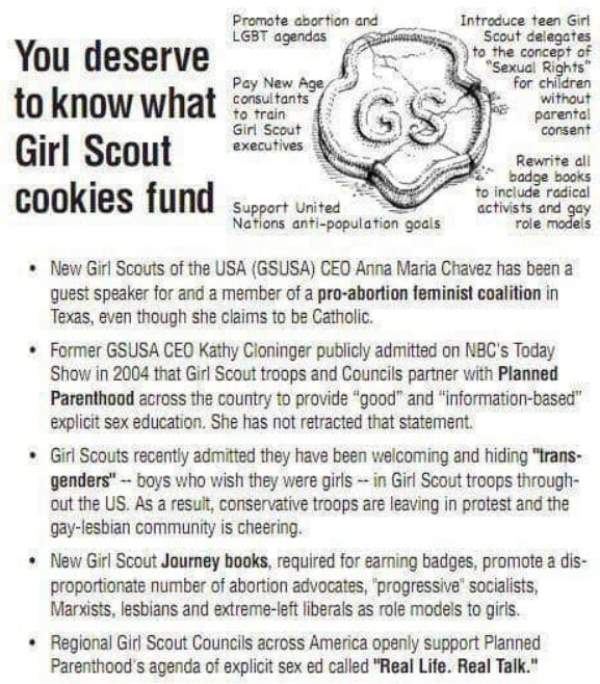 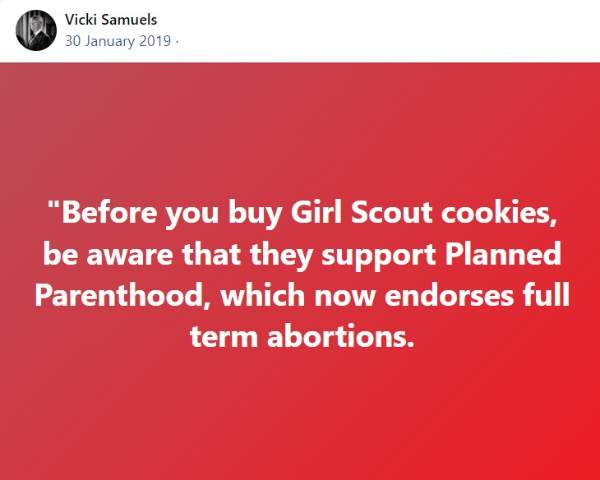 In 2014, GSUSA CEO Anna Maria Chavez denied a national relationship between GSUSA and Planned Parenthood in a YouTube video:

We do not now, nor have we ever, had a relationship with Planned Parenthood. Girl Scouts of the USA believes that reproductive issues are deeply private matters, best left to families. I find it unsettling that anyone would use the Girl Scout brand to have very adult conversations. A box of Girl Scout cookies is not a political statement; it’s an investment in a little girl.

The false claim has lingered long enough that the Girl Scouts’ website contains one section stating plainly, “No, Girl Scouts of the USA does not have a relationship or partnership with Planned Parenthood.”