Summary of eRumor:
Air Force Lt. Col. Louis E. Curdes, the pilot of a P-51 Mustang dubbed “Bad Angel,” was awarded the Distinguished Flying Cross for shooting down an American C-47 that his girlfriend happened to be aboard.
The Truth:
It’s true that Lt. Col. Louis E. Curdes shot down a C-47 that his girlfriend was aboard to prevent it from landing on a Japanese airstrip.
But while it’s true that Curdes was awarded the Distinguished Flying Cross for the valor he demonstrated in flying a P-51 Mustang with the 95th Fighter Squadron, 82nd Fighter Group, it doesn’t appear that he received the recognition for shooting down an American C-47 in the Pacific (more on that later).
A photo of Lt. Col. Curdes sitting in the cockpit of his “Bad Angel” P-51 Mustang in the Philippines’ has fueled the legend that he shot down an American C-47 with his girlfriend aboard. The flag decals below the cockpit are referred to as “kill marks,” and along with flags from all three Axis powers (Curdes was among few pilots to shoot down planes from all three countries) appears an American flag: 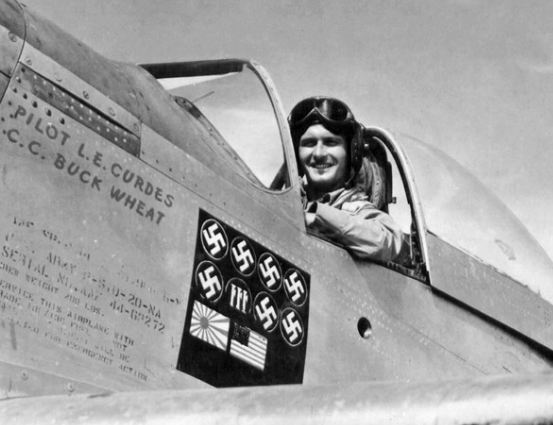 The photo is genuine. It wasn’t altered, and the American flag wasn’t added using photo-editing software after the fact. This video of Lt. Col. Curdes working on his “Bad Angel” P-51 Mustang shows the same kill marking, and the American flag is among the kill marks on the plan in the video.
Legend has it that Curdes shot down an American C-47 as it approached a Japanese landing strip on Batan Island. The plan appeared to be in distress, and Curdes reportedly though that the Japanese had patched up an American flag and didn’t bother to take the American decals off. Upon closer inspection, however, Curdes recognized the numbers on its tail:
Curdes figured as he wheeled about to give the visitor a closer look. Then he read a familiar number on the tail. It was the number of one of the “Jungle Skippers.” At this point, the Jap ack-ack, opened up – at Curdes’ P-51 but not at the transport. A quick run of thinking convinced Curdes there was only one thing to do since the plane would be Jap property as soon as it landed, if it was not already.
To prevent the plane from landing on the Japanese airstrip, Curdes quickly shot out both of its engines, and the plane glided to a soft landing in the sea. It wasn’t until the next morning that Curdes learned that one of the passengers aboard was a girl that he’d met the night before named Valorie:

The next morning before daylight, he and his wingman took off. And they were circling over the survivors when a rescue Catalina arrived to pick them up. Back at base, Curdes learned that the C-47 had been American manned with 12 occupants including two Army nurses. The pilot had become lost during a flight from Art island in the southern Philippines and had been forced to head for the nearest visible strip because of a fuel shortage. Curdes gave a start and a shout when he glanced at the names of the survivors. One of the nurses was the “date” he had been with the night before at Lingayen.

The legend goes on to state that three weeks later, Curdes was awarded the Distinguished Flying Cross for shooting down the C-47, and that he went on to marry the girlfriend that was aboard the plane that he shot down.
The story of Curdes shooting down the C-47 with his girlfriend (and future wife) aboard was researched and retold in the ebook, “US Army Air Force Pilot Shoots Down Wife,” by retired Air Force Col. Ken Tollefson.
The only detail that differs in Tollefson’s recounting is that military records reported 13 American survivors from the C-47 in the water, while there are 12 in common retellings.
And we can use online ancestry records to confirm that Louis Curdes did in fact marry a woman named Valerie.
One of the main discrepancies, however, appear to be related to claims that Curdes was awarded the Distinguished Flying Cross for shooting down the American C-47. Military records indicate that Curdes received the honor for his service with the 95th Fighter Squadron, 82nd Fighter Group, in the Mediterranean Theater of Action during World War II.
However, at the time he shot down the C-47 he had been reassigned to the 4th Fighter Squadron, 3rd Air Commando Group. The incident occurred near Bataan Air Field in the Philippians, which was in the Pacific Theatre.
That means he likely was awarded the Distinguished Flying Cross specifically for shooting down the C-47, which has been widely reported.
So, most details about Lt. Col. Louis Curdes and his “Bad Angel” P-51 Mustang check out, but we’re calling this one “truth and fiction” because of claims about why he was awarded the Distinguished Flying Cross.