Summary of eRumor:
A woman in Virginia opened her order of fried chicken pieces from McDonalds and was disgusted to find the deep-fried head of a chicken.
The Truth:
This is an unusual eRumor because it does have a first-hand source, but the final chapter of the story has yet to be written. 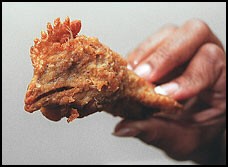