This is a forwarded email with images that says China has built its first aircraft carrier. The new ship is multi-hulled, a superstructure on two pontoons, and has two helipad below the stern. 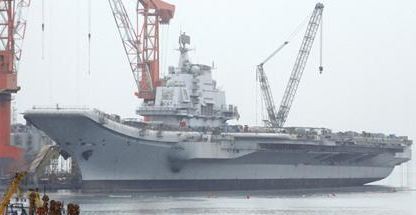 China has introduced its first aircraft carrier but, according to a June 8, 2011 BBC News article, the vessel is nothing close to what is described in this eRumor.
The article said that the carrier is actually a refit of a Soviet carrier, named the Varyag, which was built in 1985 but was never completed.   The rusting hull was purchased from Russia in 1989 for $20,000,000U.S. and the semi-completed vessel now sits tied to a berth in the Chinese port of Dalian undergoing the finishing touches before her first cruise, which is anticipated in the next few months.   A life-sized model of the carrier was constructed on land several miles away so that the Chinese navy could train her crew while work was being completed on the new carrier.

The BBC also said that China does plan to build 6 more carriers in the next 10 to 20 years but no designs have been released to the public at this time.   Currently, the U.S. has 11 aircraft carriers in operation and Italy has 2.   The United Kingdom, France, Thailand, Brazil, Spain, Russia and India each have one carrier.
Updated 7/27/11