Chris Harper-Mercer Was an Islamist Terrorist with Ties to ISIS-Fiction!

Given that Catholic nationalists who wanted to push back against the Protestant majority in Northern Ireland established the IRA, it’s highly unlikely that someone with radical Islamic beliefs would spread the group’s propaganda.
Chris Harper-Mercer also identified himself as “not-religious, but spiritual” in a profile that he posted on a dating website, which would seem unusual for a man with radical Islamic beliefs: 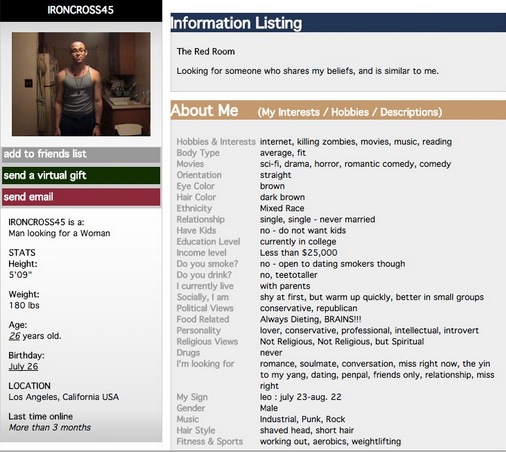 Also, Harper-Mercer’s user name was listed on the site as“IRONCROSS45,” a reference to Nazism and symbol of white supremacy, according to the Anti-Defamation League:

In the United States, however, the Iron Cross also became one of several Nazi-era symbols adopted by outlaw bikers, more to signify rebellion or to shock than for any white supremacist ideology. By the early 2000s, this other use of the Iron Cross had spread from bikers to skateboarders and many extreme sports enthusiasts and became part of the logo of several different companies producing equipment and clothing for this audience. Consequently, the use of the Iron Cross in a non-racist context has greatly proliferated in the United States, to the point that an Iron Cross in isolation (i.e., without a superimposed swastika or without other accompanying hate symbols) cannot be determined to be a hate symbol. Care must therefore be used to correctly interpret this symbol in whatever context in which it may be found.

Last night a police source confirmed that Mercer – whose father Ian is from Preston, Lancashire – had left behind a typewritten manifesto along with a computer drive outlining his ‘motives’ for the massacre.

”He had a hatred of black people, women, everyone,’ the source said, adding: “The drive and manifesto are being analysed. There is a lot about his hatred of organised religion.”

There has been a lot of speculation about what motivated Chris Harper-Mercer to kill, but there’s no indication that he was an Islamist terrorist.