The Amazing and Touching Story of Christian The Lion-Truth!

Summary of eRumor:
This email comes with either a video attachment or a link to the video.  It tells the story of two men in London who reared a lion cub named Christian.  When it got to big for them to keep, they sent it to live in Africa.  A year later they went to Africa to

visit.  There was drama about whether the lion would remember them but it came out of the wild for a joyful reunion—caught on video.

The Truth:
The story and the video are real, although some of the facts are wrong.
The release and reunion of Christian the Lion took place in Kenya more than 30-years ago.  The eRumor with the video link about Christian began circulating in July, 2008.

Australian John Rendall and his friend Ace Berg bought the lion cub from Harrods in London in 1969 when the world famous store had an exotic animals department. Herrods had gotten the cub from Illfracombe zoo and it was on display at the store in cage when spotted by Rendall and Berg. 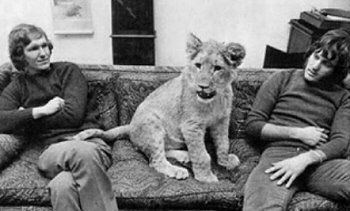 Christian lived in the basement of Rendall’s flat in Chelsea and for a year was a pampered cat.  And a clean one too, according to Rendall.  He unfailingly used a very large kitty litter box and was jointly cared for by Rendall, Berg, and two of their female friends.

Christian eventually grew to nearly 200 pounds and started growing a mane, which made him look fearsome even though he was very friendly and accompanied his owners to all kinds of events.  He became a feature at Rendall’s furniture store and one day Bill Travers and Virginia McKenna walked into the store and saw Christian.  They were actors who had been in the film Born Free, the true story of a lion cub named Elsa that was successfully rehabilitated into the wild in Africa by conservationist George Adamson and his wife Joy.

It was decided that Adamson and Africa might be the next destination for Christian.  Adamson was cautious because Elsa had been an African lion born in Africa.  Christian was from London and had lived a very different first year of life. 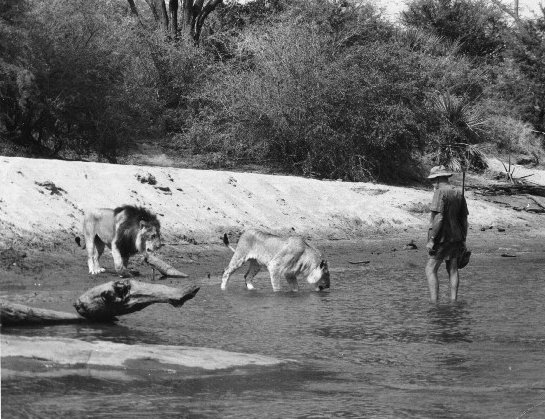 In Arica, Christian befriended a lion from the Born Free film named Boy.  Adamson added a female lion to the friendships and began the process of educating Christian about the wild.

Rendell and Berg would visit from time to time to check on Christian’s progress but it was in 1974 that Adamson told them that Christian had finally adapted to the wild.  He had a litter of cubs, did not return to the camp very often and was the leader of his pride (Boy had been shot and killed in a tragic event near the camp.)

Upon hearing the news, Rendell and Berg decided they would make a final trip to say goodbye even though Adamson told them it might be a waste of time.  Christian had not been seen in nine months.  But when the two men arrived in Kenya Adamson told them that Christian and his pride of lionesses and cubs had arrived the night before, almost as though he had known they were coming.  Adamson said Christian was sitting on his favorite rock outside the camp waiting for them.  The reunion, as seen on the video, was one of overwhelming joy and tears.  Afterwards Adamson warned that the lionesses didn’t seem too pleased with what was going on so it might be time to leave.  It was the last time that Christian was ever seen. 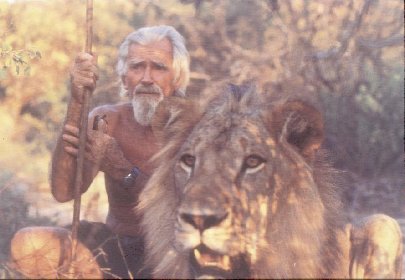 Adamson continued his work in Kenya but was shot and killed in 1989 by either poachers or bandits.
A film and a book were made about the remarkable story of Christian the Lion.
Updated 11/21/08