This is a forwarded email about a mysterious contrail that appeared in the skies over the Southern California on November 8, 2010.  The email alleges that the large smoke plume came from a ballistic missile that was launched from a Chinese Navy Jin class nuclear submarine from an area just north of Catalina Island about 35 miles from the shores of Los Angeles, CA. 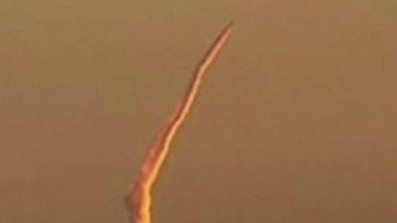 There was a mysterious plume that appeared in the early evening skies over Southern California  near Los Angeles on November 8, 2010.   The news drew national attention when experts speculated the contrail could have been caused by an airplane or a ballistic missile.   CBS News reported two days later that military and civilian experts had determined this to be from the contrail of a jet aircraft cruising over the area at high altitude.    Click for CBS Story.
Rumors began circulating on the Internet during the weekend of November 13th. alleging that the mysterious contrail was from a missile launched from a Chinese Jin class nuclear submarine that had snuck into our coastal waters and that the news media along with the Pentagon were covering up the story.  These forwarded emails contained text from an article by Washington D.C. based investigative journalist Wayne Madsen along with photos that appeared on a page from the Infowars.com web site of nationally syndicated radio host Alex Jones based out of Austin, TX.   The article said the “Chinese decided to demonstrate to the United States its capabilities on the eve of the G-20 Summit in Seoul and the Asia-Pacific Economic Cooperation summit in Tokyo, where President Obama is scheduled to attend during his ten-day trip to Asia.”  TruthOrFiction.com has not found any evidence to support their claims.

The plume, captured on video by CBS news helicopter cameraman Gil Leyvas was televised on November 8th and sparked a national fury of inquires after a slow response from the Pentagon that needed time to examine the footage and other materials. That evening a spokesperson from the United States Navy told reporters “that there was no Navy activity in that region.”  Meanwhile reporters sought the advice of the other experts.  One such expert was former Deputy Secretary of Defense Robert Ellsworth who speculated that the video could have been a test firing of a U.S. intercontinental ballistic missile from a submarine as a show of strength to Asia from President Obama.     Click for story and video.

A little over twenty-fours hours after the incident, a November 10th. CBS News article said that the Pentagon had yet to identify the object in the sky but confirmed that no U.S. Missiles had been launched that Monday.  The article also said that the North American Aerospace Defense Command (NORAD), the organization that monitors this sort of activity in the skies, had been contacted by CBS and confirmed that no missile launches had taken place globally.

Popular Science Channel host Dr.Michio Kaku said that at first he thought the images were those of a missile but after he had time to reexamine the video he said that he was not thoroughly convinced but he was leaning toward the belief that this was a jet aircraft cruising over Southern California. Dr. Kaku is also a professor of physics at City University in New York.     Kaku was interviewed by ABC News on November 10th. offering his reasons why he did not think that this was a launched missile.  He said that launched missiles increase their speed, travel East to West and do not alter course.   He told reporters that the object in the sky had not changed its speed but was altering course and was travelling in the wrong direction.  He also said that the contrails expansion at the bottom of the frame had given it an optical illusion of a water launch and since missiles go up into the higher atmosphere other nations would have reported a sighting on their radar.