Congress approved a bill in November 2017 that makes it a federal crime to play Christmas music before Thanksgiving.

It’s not a federal crime to play Christmas music before Thanksgiving. A tongue-and-cheek report published by a website that describes its content as “Christian news satire” is behind the rumor.

The fabricated report appeared at The Babylon Bee just as the 2017 Christmas season began to ramp up in early November.

According to the story, anyone who breaks the law would be subject to an “immediate search” by federal agents under the fictitious law. And violators could be transferred to a secret CIA detention center where they’d be subject to questioning and up to 20 months imprisonment. 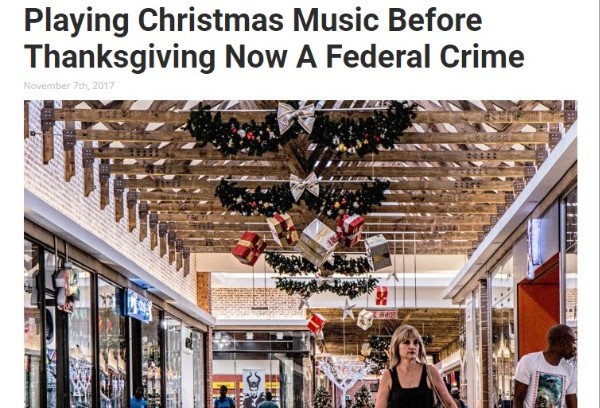 Of course, none of that is true. The Babylon Bee describes itself as “your trusted source for Christian new satire.” Its stories shouldn’t be mistaken for factual news. But that’s lost on social media users who don’t click-through to read the entire article on the website.

Many shoppers complain that retailers seem to start playing Christmas music earlier every year, and they might have a point. In 2017, Best Buy added Christmas music to its repertoire on October 22nd. By November 11th, Office Depot, Belk, H&M, Ulta, Sears, Michaels and Mauricie’s had all joined the fray, the Tampa Bay Times reported.

So, what’s the big deal? Well, for those who wish it were illegal to play Christmas songs early, there’s a least some scientific proof. Clinical psychologists warned it could be detrimental to your mental health to listen to the same Christmas songs on repeat:

In the end, it’s not a federal crime to play Christmas music before Thanksgiving. Even if some people think it should be.