A “satirical” post from November 2017 was unwittingly prescient about Republican Party attacks against democracy a few years later.

In this case, the blog “America’s Last Line of Defense” falsely claimed that federal courts had overturned ballot referendums in Arizona and Maine and that two Democratic Party state senators in Virginia had lost their seats.

True to its alarmist form, the blog’s post — which has since been deleted — was promoted with a headline billing it as an “UPDATE”: 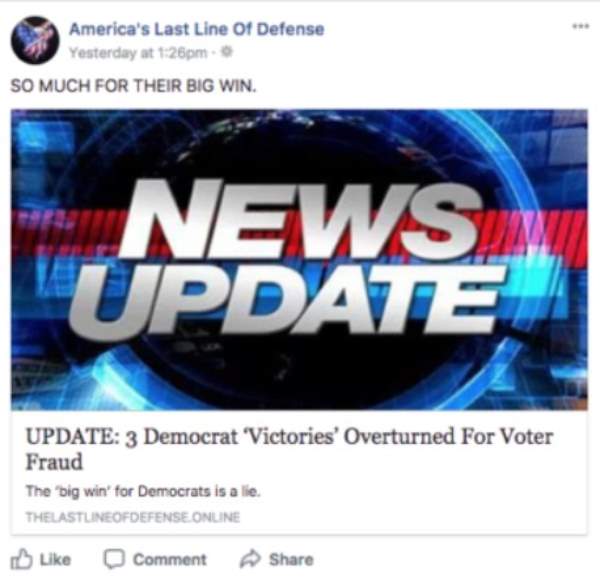 Democrats keep cheating and getting caught. They may have even won some of those elections had they not had them thrown out for their own stupidity. It’s a real shame that they can’t even win in their own crooked districts anymore.

As we have noted in the past, the blog and its associated social media pages include disclaimers telling readers its material is “satirical work or fiction” designed to reinforce the political agendas of “today’s busy conservatives.” Its founder has claimed that its content is meant to lampoon right-wing rhetoric and trick users into sharing posts sight unseen.

The “joke,” however, turned all too real following the victory of U.S. President Joe Biden — a Democrat — in the 2020 presidential election. As we have also noted several times, right-wing operatives launched illegitimate “audits” as well as legal challenges seeking to overturn Biden’s victory. These efforts have failed decisively; more than 50 lawsuits lawsuits claiming that Biden beat incumbent Donald Trump because of “irregularities” were dismissed in state and federal courts across the United States. As the Washington Post reported:

The reason: Judges have said the Republicans did not provide evidence to back up their assertions — just speculation, rumors or hearsay. Or in one case, hearsay written on a sticky note.

The result has been a flurry of filings that Trump has cited as a reason to avoid conceding defeat — but, so far, have done nothing to prevent the defeat itself.