Hoboken Mayor Ravi Bhalla didn’t abolish Christmas after being elected in November 2017. And Bhalla isn’t a Muslim — he’s a Sikh, which is a different faith. 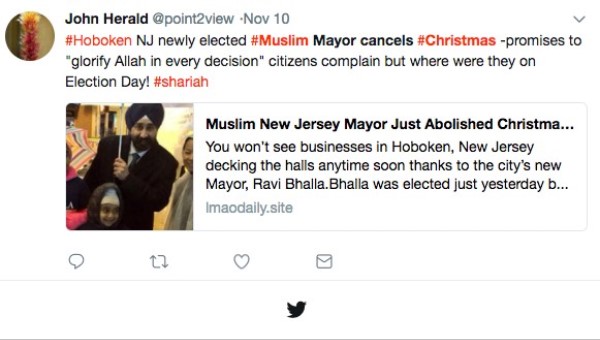 The story reports that Ravi Bhalla “wasted no time in implementing his new regime,” and issued an order that ended “government involvement in the Christian holiday Christmas” out of respect for “other religions.'” The article quotes the “turban-wearing Muslim mayor” as saying:

Aside from the website’s “satire” disclaimer, there are a few obvious clues that the report isn’t accurate. First, it attributes the quote to “The Hoboken Star” — a publication that doesn’t exist. Second, it misidentifies Ravi Bhalla as a Muslim, a blatant factual error that should call the site’s credibility into question.

The Sikh Coalition explains that there’s a common misconception that Sikhism is a combination of Hinduism and Islam. However,  Sikhism “has its own scriptures, gurus and houses of worship. Sikhism is a separate faith, and is not a branch of any other religion.”

For all those reasons, it’s easy to classify claims that the Muslim New Jersey mayor abolished Christmas as “fiction.”

Note: According to the media-tracking website Media Bias/Fact Check, Reagan Was Right was no longer available online as of May 2018.