A chain email contains a list of ideas from billionaire Warren Buffett to "fix" Congress.

A persistent email that contains a list of ideas “to fix Congress” has made the rounds for many years, regularly updated and tweaked to reflect political developments. A typical version reads as follows:

We must support this…pass it on and let’s see if these idiots understand what people pressure is all about.

I think we found where the cuts should be made! If you agree pass it on, I just did.

Warren Buffett, in a recent interview with CNBC, offers one of the best quotes about the debt ceiling:

“I could end the deficit in 5 minutes,” he told CNBC. “You just pass a law that says that anytime there is a deficit of more than 3% of GDP, all sitting members of Congress are ineligible for re-election.

The 26th amendment (granting the right to vote for 18 year-olds) took only 3 months & 8 days to be ratified! Why? Simple! The people demanded it. That was in 1971 – before computers, e-mail, cell phones, etc.

Of the 27 amendments to the Constitution, seven (7) took one (1) year or less to become the law of the land – all because of public pressure.

Warren Buffett is asking each addressee to forward this email to a minimum of twenty people on their address list; in turn ask each of those to do likewise.

In three days, most people in The United States of America will have the message. This is one idea that really should be passed around.

The origins of this particular rumor are unclear, but by October 2011, versions appeared with quotes inserted from billionaire philanthropist Warren Buffett to burnish it with a veneer of authenticity.

The quotes are real; they were taken from a transcript of a July 2011 interview on CNBC, during which Buffett jokingly said:

I could end the deficit in five minutes. You just pass a law that says that any time there’s a deficit of more than three percent of GDP, all sitting members of Congress are ineligible for re-election. Yeah, yeah, now you’ve got the incentives in the right place, right?

New versions of the original email forward have appeared periodically since. In 2014 a version, still touted as Warren Buffett’s creation, was modified to include the salaries of retired presidents and members of the legislative branch. This version goes on to compare those salaries to enlisted military and teachers.

This call for citizen action first appeared on the Internet shortly after the 112th Congress was sworn in on January 5, 2011. We found many of the claims from the list to be inaccurate:

Congressional representatives are exempt from paying into Social Security.

Fiction. Elected representatives are not exempt from paying into Social Security. We have findings posted in a related rumor. Click for findings.

Congressional representatives are above the law.

Fiction. Congressional representatives are not above the law.

For example, in January 2010, Texas Republican Tom DeLay was sentenced to three years in prison after being found guilty for his participation in a scheme to illegally funnel corporate money to Texas candidates in 2002. Three years later, a Texas court overturned DeLay’s conviction, saying prosecutors failed to prove that he broke the law in a fundraising scandal from the 2002 elections.

Ohio Democrat James A. Traficant was expelled from Congress after being found guilty of bribery and racketeering. Traficant served seven years behind bars in a Minnesota prison and was released in 2009. He died in 2014.

Congressional representatives have been voting themselves cost of living pay raises.

Fiction. Cost-of-living salary increases for congressional members have been automatically generated in the past, but some members have been known to voluntarily opt out of it. Members of Congress have foregone pay raises during austerity, and the 111th Congress, under the leadership of Nancy Pelosi, voted to stop the automatic pay raise for two consecutive years.

Salary of retired United States Presidents is $180,000 for life.

Fiction. According to USGovInfo.about.com, the salary of retired presidents changed in 2013 when the Former Presidents Acts was signed into law. Retired presidents earn $199,700. This is also the same annual salary paid to former secretaries who served in the Executive Branch Cabinet. The First Lady earns no salary, therefore draws no pension, but she does get free postage stamps for the rest of her life.

Fiction. The salary of $174,000 per year for the rank-and-file members of the House and Senate is correct, but when they retire they do not draw this salary. After five years, according to USGovInfo.about.com, they are fully vested into a federal retirement plan. Elected representatives also pay into Social Security.

Fiction. The amount is correct, but it is not for life, according to USGovInfo.about.com.

Salary of Majority/Minority Leaders is $193,400 for life.

Fiction. The amount is correct, but it is not for life, according to USGovInfo.about.com.

Fiction. Teachers’ salaries vary depending on the location, school district and the grade level they work in. According to the PayScale.com website, the salary of teachers range from  $41,454 to $47,884 per year.

Fiction. The United States military takes many factors to calculate the pay for an active duty member who has been deployed. Rank, time in the service, marital status are all factored in plus hazardous duty pay. According USMilitary.about.com, an E-5 member (Sergeant) with six years in the military who is stationed in San Diego, California can earn up to $54,989.76 per year, tax-free. The 2014 base pay chart below was found on the Go Army website: 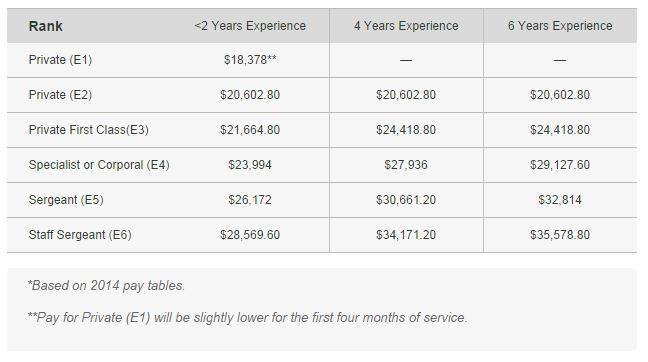 Example of base pay for military members does not include deployment or hazardous duty pay.

We have not found that this type of email has had any influence on the decisions of elected officials.