Thousands of schools, churches, and businesses around the U.S. received threats of a "Halloween night purge."

A garbage blog posing as an actual TV news outlet recycled another bit of pop culture in October 2017 to publish their own take on “creepy clown” disinformation.

The blog, “Action News 3,” claimed that threats of a “purge” had been sent around the U.S.:

“If you value the safety of yourself and your children, stay inside on Halloween night,” warned the Sgt. William Stein during a meeting with the Department of Homeland Security. “We have escalated these threats to acts of domestic terrorism and are working closely with the Department of Homeland Security to keep Americans safe this Halloween season.”

According to Stein, several threats about a “Halloween night purge” have been sent to schools, businesses, and even churches all across the United States. Local and state authorities are urging parents to not take their children out on October 31. Concerned parents are pushing for a mandatory curfew on the 31st which will begin at 5 PM. Others say this should not ruin their children’s Halloween tradition.

To add to the ginned-up dread, the “story” included a photograph of an anonymous figure wearing a blank face mask with the word “GOD” written on it: 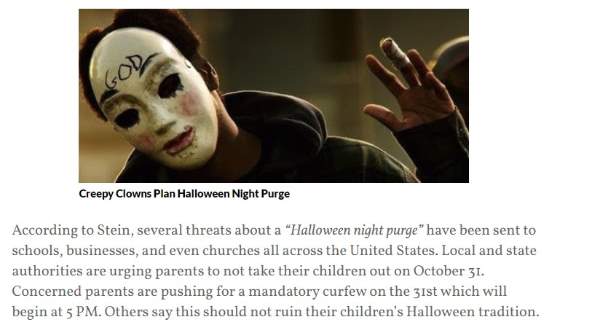 Much as it refuses to tell readers that its content is fake, “Action News” refused to mention that this photo was literally a still from the film The Purge: Anarchy.

As we have noted in the past, the “Creepy Clown” trend originated a year before the post by “Action News.” And the “Purge” version was as overblown as the original version; authorities in Greenville, South Carolina — one of the cities that was mentioned in both versions — released a statement saying:

There is no credible threat. As we do each year there will be adding extra patrolling to ensure the safety of the public during Halloween. We ask that everyone be vigilant and if you notice unusual behavior contact 911 so that officers may respond to investigate. While the officers respond be a good witness and obtain as much information about the individual or vehicle.

One group calling itself “Clown Purge Australia” seized on the clown-related panic for easy Facebook content, telling users to “get ready for the 2nd round”: 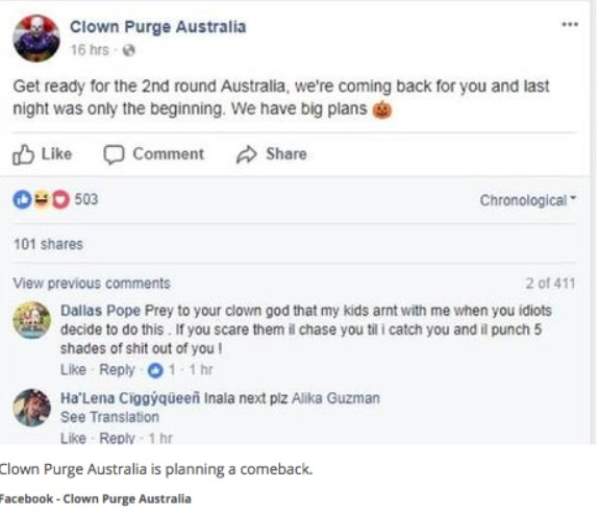 However, like many people who push disinformation online, the group portrayed itself as a victim when placed under scrutiny.

“All these haters but we ain’t even in this to harm people, we are simply here to use Clown Horror as entertainment,” the group later said. “Y’all saying we have nothing better to do but you’re sitting there putting hate on a f***ing clown page, okay.”