Rep. Alexandria Ocasio-Cortez said that if owning guns were a right, it would be in the Constitution.

New York Rep. Alexandria Ocasio-Cortez (D-New York) has captured the attention of the internet and its trolls, which means that memes and rumors about her are quite common — most of which seem to attribute either motives or quotes to her with no citation or evidence.  One such meme, which has circulated for some time, carries the claim that the freshman congresswoman said that “owning guns is not a right”: 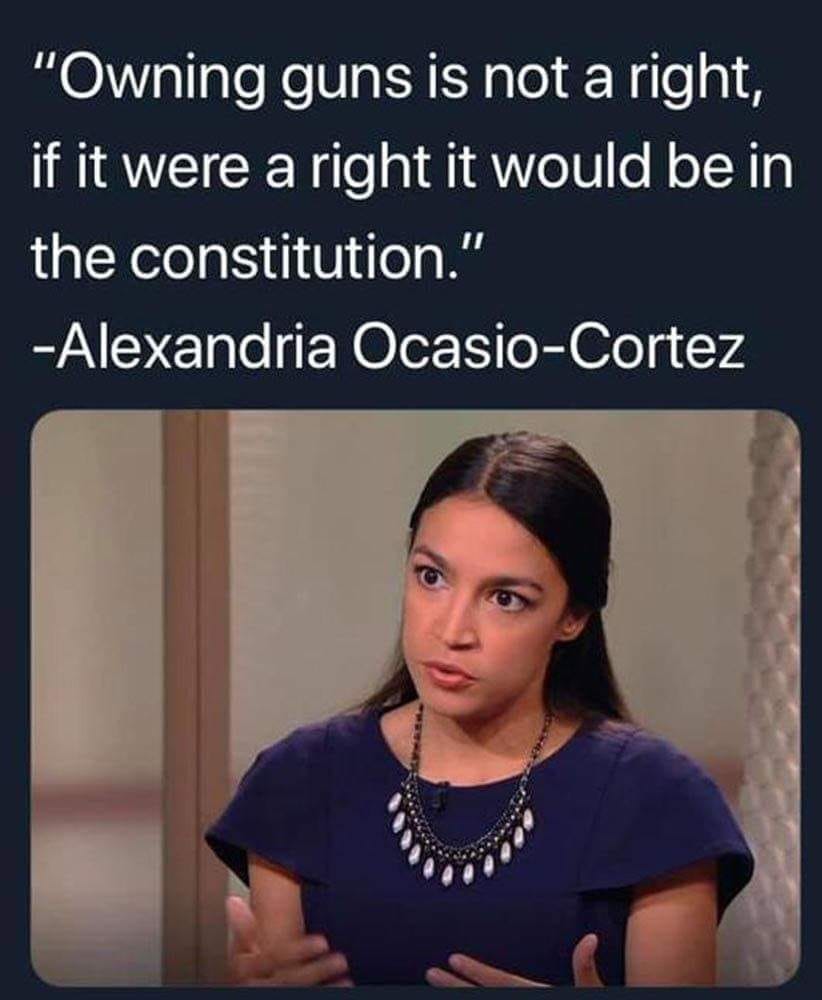 In the above image, a photograph of Ocasio-Cortez has the following text over it:

“Owning guns is not a right, if it were a right it would be in the constitution.”

Regardless of the fact that this meme, like so many others, carried no citation or links to video or other context, readers and commenters often accepted the quote as authentic, deriding Ocasio-Cortez’s supposed ignorance of the Second Amendment of the United States Constitution:

A well regulated Militia, being necessary to the security of a free State, the right of the people to keep and bear Arms, shall not be infringed.

However, if Ocasio-Cortez was unaware of the Second Amendment and its stipulations, it is unlikely she would have included reference to it twice in her official platform:

… Even in the United States, cities and states with strong gun laws have managed to cut gun violence significantly without running afoul of the Second Amendment.

It’s clear that the Founding Fathers did not have assault weapons in mind when they wrote the Second Amendment.

In June 2017, Ocasio-Cortez did a Reddit AMA (“Ask Me Anything”) in the subreddit r/SandersForPresident. In a comment, she identified herself as a “believer” in the Second Amendment:

Combating domestic terrorism? Keep the severely mentally ill and people with a history of domestic abuse from purchasing guns. I am a believer in the second amendment, but this is where I draw the line.

This “owning guns is not a right” quote meme circulated in January 2019, at which time PolitiFact examined the claim (rating it “Pants on Fire.”) In April 2019, FactCheck.org also attempted to validate the quote and came up short:

We could find no record of Ocasio-Cortez ever making that statement. We did find, however, that as a candidate [in 2018], she recognized the Second Amendment to the Constitution — which the Supreme Court has found “protects an individual right to possess a firearm unconnected with service in a militia, and to use that arm for traditionally lawful purposes, such as self-defense within the home.”

The Alexandria Ocasio-Cortez “owning guns is not a right” meme was not the first unflattering claim or fabricated quote attributed to her to circulate virally on social media. Previously, claims appeared that she had “forgotten” to vote in favor of her own Green New Deal proposal, that she said her Girl Scout troop “re-enacted” the Challenger explosion, that she asserted white women need to have more abortions, that she said “all the technology in the world” would not allow a wall to be built over mountains, and that said stated that it was possible to land on the sun if we “go at night.” None of these had any truth to them. In one instance, we did find an accurate meme: It listed off Ocasio-Cortez’s early accomplishments.