"The Simpsons" predicted the emergence of coronavirus in 1993.

A novel strain of coronavirus discovered in Wuhan, China in late 2019 led to a flood of rumors, among them claims that the long-running American cartoon series The Simpsons “predicted coronavirus” in 1993:

The Simpsons have done it again 🤯 #CoronaVirus pic.twitter.com/OHBnmU0KKL

A screenshot of a tweet shared by the Facebook meme page “FuckSalt” on January 31 2020 contained four purported screengrabs from The Simpsons along with text reading:

The Simpsons scares me. This episode aired 27 years ago in 1993. [emoji] #coronavirus

Seen in the four images clockwise were a news anchor next to a chyron reading “CORONA VIRUS,” two workers in hardhats coughing an infectious cloud into a box, Homer Simpson on his couch surrounded by a similar viral cloud, and Principal Skinner also surrounded by viral particles.

Nevertheless, the claim held The Simpsons predicted an outbreak of coronavirus in 1993, so let’s break it down. This particular episode of The Simpsons (“Marge in Chains”) aired in May 1993.  A synopsis explained that the episode began with an ill factory worker in Osaka, Japan (not China), and a strain of influenza (not coronavirus), which spread to the United States via infected juicing machines (the novel strain of coronavirus discovered in late 2019 appeared to spread via humans traveling, not objects):

Many of Springfield’s residents purchase “Juice Looseners” through the mail, which are inefficient and loud juicers built in Osaka and shipped from there. One of the assembly line workers has the flu and coughs into the box destined for Homer, filling it with airborne germs. When the Juice Looseners arrive in Springfield, the Osaka Flu hits the town and many of the townspeople are affected by the illness. Due to exhaustion from having to look after the rest of her ill family, Marge accidentally forgets to pay for Grampa’s bottle of bourbon when shopping at the Kwik-E-Mart. She is then arrested for shoplifting.

In previous and similarly exaggerated Simpsons predictions claims involving a fire at Notre Dame cathedral and Greta Thunberg, pranksters and hoaxsters edited screen captures to suggest they were more “accurate” than the actual content of the episodes.

That also appears to have happened here. In the tweet’s first panel, a news chyron reads “CORONA VIRUS.” Its base image appeared on the internet several years earlier, and the “CORONA VIRUS” portion was likely added in January 2020. It did not air in the original episode: 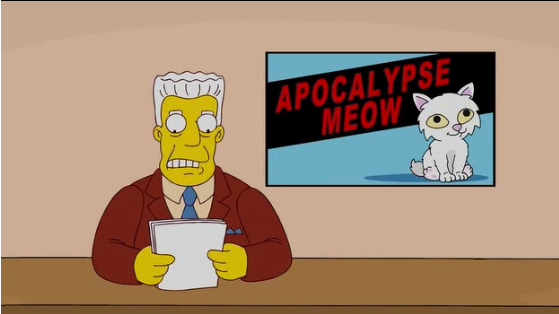 Another thing to remember is that epidemiology — the study of how diseases develop and spread — is not an arcane or unknown element of medicine. Similar parallels about what was admittedly a far deadlier epidemiological crisis formed the basis of the 2011 film Contagion, which begins with an American traveler returning from Hong Kong with a deadly virus.

Neither the episode of The Simpsons nor Contagion were especially prescient, other than weaving the subject of epidemiology into a film or a television show. Both dealt in whole or part with the manner in which epidemiologists must race against the clock to identify, contain, and combat new viruses — not unlike the novel coronavirus strain that first appeared in late 2019.

Although it is true a 1993 episode of The Simpsons, “Marge in Chains,” involved an illness it called “Osaka Flu,” the “CORONA VIRUS” screengrab accompanying the rumor was a hoax. Additionally, in the context of entertainment about epidemiology was neither prescient nor unexpected — coronaviruses were identified decades before even the 1993 Simpsons episode, and the episode was not about a strain of coronavirus to begin with.