Twitter’s permanent removal of outgoing United States President Donald Trump on January 8 2021 created extensive discourse and discussions about the limit of speech in the country; among sub-threads was a claim that his favorite social media platform Twitter  ($TWTR) “lost $5 billion in value” as a direct result of its decision to deplatform him:

Twitter lost over $5 billion in market value after banning the President and other top key Conservatives.https://t.co/KGudPu1bPT

Anti-abortion disinformation site LifeNews.com addressed the claim in a January 13 2021 post (“Twitter Has Lost $5,000,000,000 in Market Value Since Banning President Trump”), and attributed the purported loss of $5 billion in revenue to Twitter’s decision to remove the @realDonaldTrump account:

Go woke, or go broke? Orwellian platform Twitter has now experienced the effects of that principle for the draconian anti-free speech measures it has wielded lately.

Yahoo! News reported that Twitter shares dive-bombed more “than 10% on Monday [January 11 2021]” following its decision to ban President Donald Trump from its site after the Capitol Hill riot Jan. 6 [2021]. Specifically, the liberal outlet noted that “Shortly after market open Monday [January 11 2021], the stock dropped as much as 12.3% to reach as low as $45.17 per share.”

Google Trends showed search interest in whether “Big Tech” had been fiscally “punished” for their decision to disallow Trump from their platforms. Popular searches included:

LifeNews.com also referenced a January 11 2021 Business Insider post and its “real kicker,” that Twitter lost $5 billion “from its market capitalization.” The linked article was more speculative:

Twitter stock likely fell because investors are worried the Trump ban will erode interest in the platform and lead to boycotts among those who see the decision as politically motivated and a way to silence a major conservative voice.

For context, “market capitalization” is defined as follows:

As such, when share prices dip, market cap follows — the number of outstanding shares multiplied by a price after a dip is for that time lower, resulting in a lower overall sum based on the share price.

In a vacuum, the cause-and-effect claim looked fairly clear — Twitter decided to revoke Trump’s access to the platform on January 8 2021, and by the next stock market open on January 11 2021, the company had clearly tanked in value, and furthermore, $5 billion was clearly not chump change.

However, popular stock-trading app Robinhood made it easy to look at Twitter’s contemporaneous movement ($TWTR) — in the “one week” timeframe, a large dip was evidenced between the end of trading on January 8 2021 (when Twitter closed at $51.48 a share) and the opening bell on January 11 2021 (when Twitter traded at $46.02 per share): 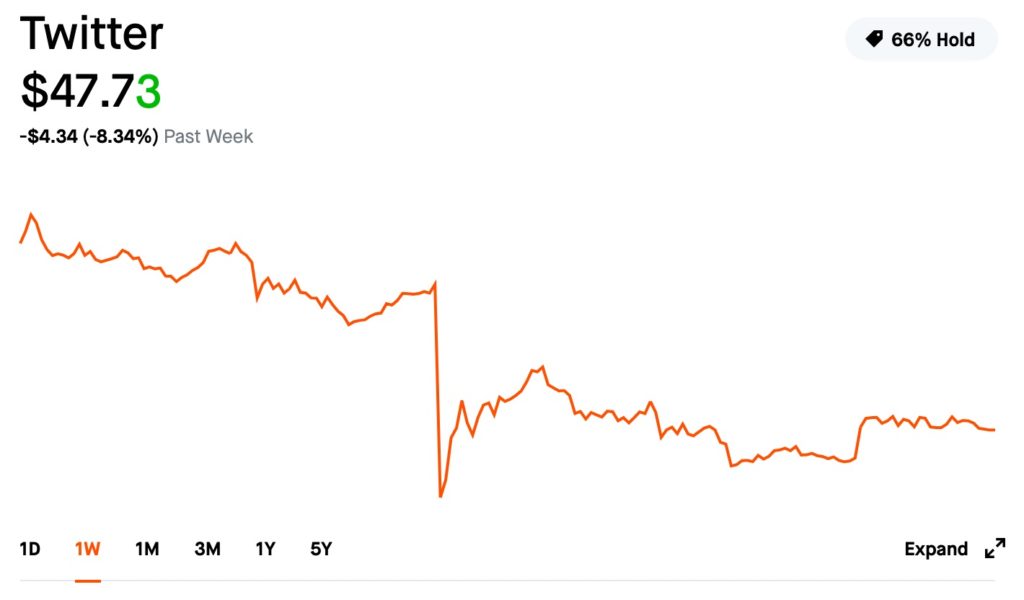 Moreover, moving the chart from “1W [one week]” to “3M [three months]” indicated Twitter had lost and recouped larger amounts for seemingly no reason within that timeframe. 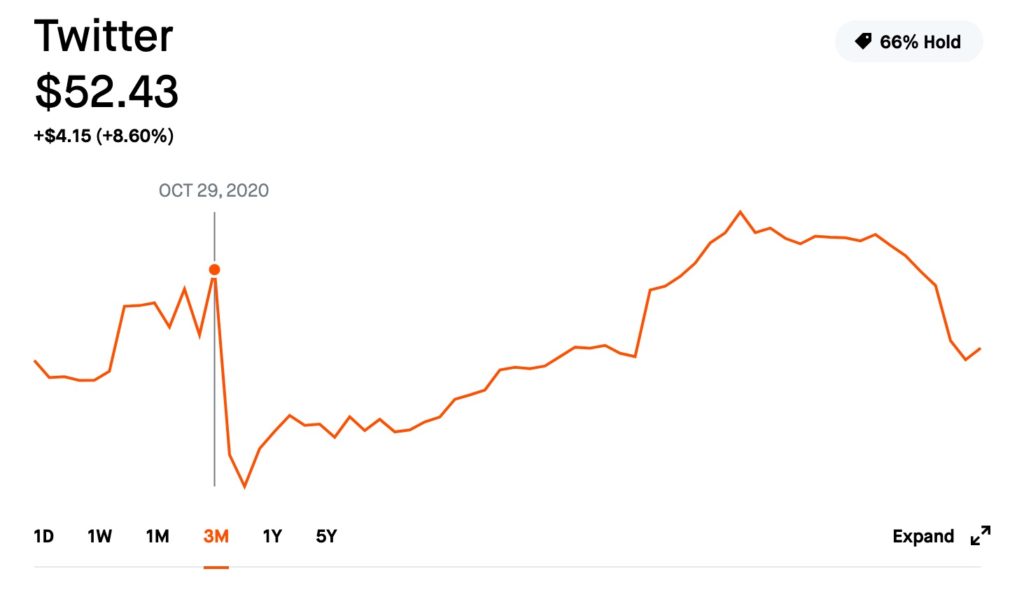 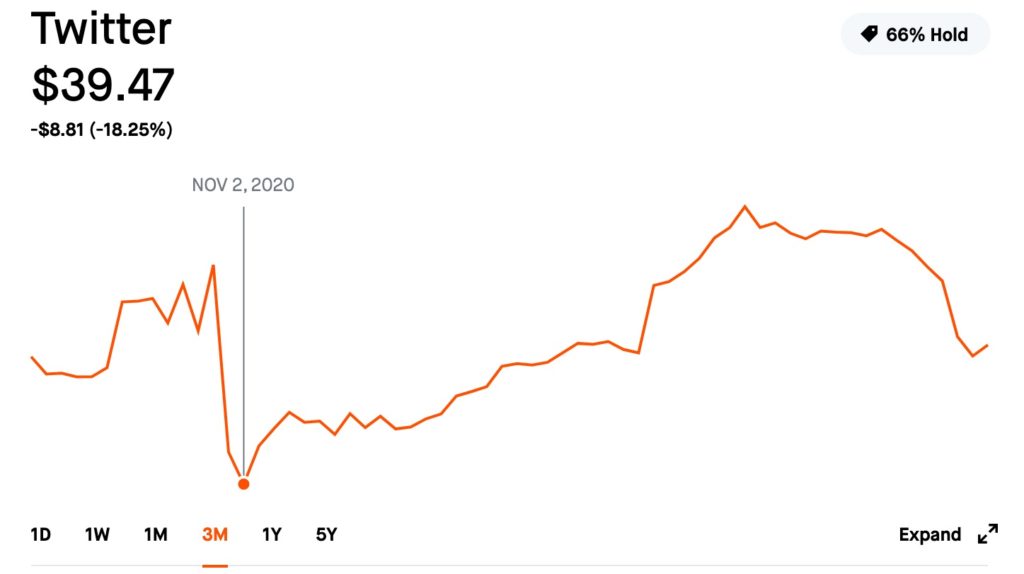 Yet this larger dip did not create headlines everywhere, Twitter shareholders didn’t start dumping the stock left and right, and $TWTR was back in the original range at some point between December 14 and 15 2020.

Robinhood is designed for first-time investors to start trading, and so its interface provides easy access to information about a stock. As of January 13 2021, an “About” section provided a summary of $TWTR: 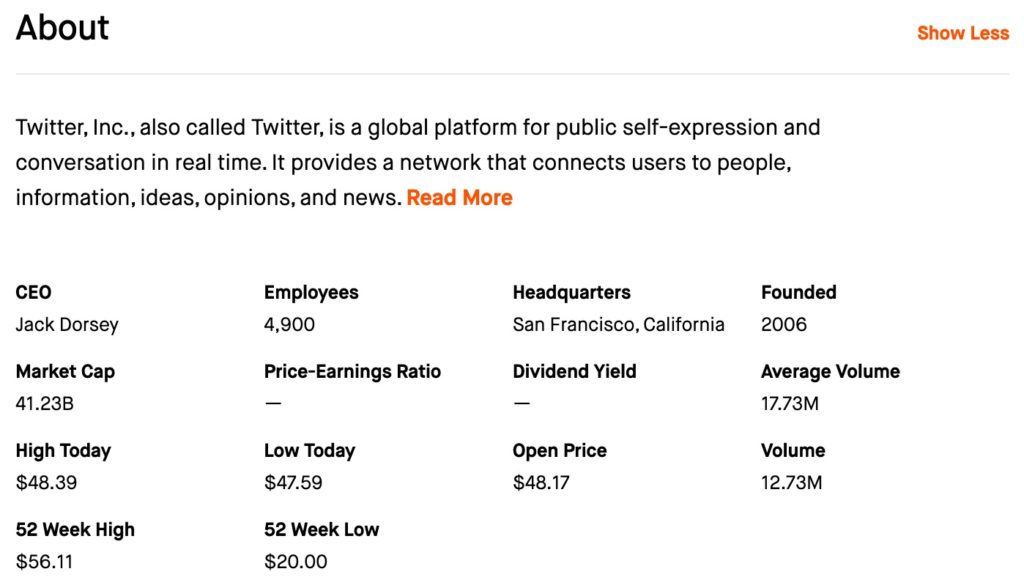 Shares of Twitter Inc. TWTR, 1.45% bounced 1.8% in afternoon trading Wednesday [January 13 2021], putting them on track to snap a six-day losing streak, which would be the longest in three years, after MKM Partners analyst Rohit Kulkarni upgraded the social media company, saying the headwinds that have weighed on the stock recently are likely to reverse this year.

On January 13 2021, LifeNews.com reported Twitter had lost $5 billion due to its decision to “ban” Trump on January 8 2021, a claim that was out-of-context and outdated. Stocks like Twitter are popular, volatile, and reactive to any sort of news. Twitter recovered from larger dips in then-recent months, and no one seemed to notice that Twitter recouped over $2 per share in the first 40 minutes of trading on January 11 2021. Overall, Twitter’s stock sustained expected volatility when it entered the global news cycle on January 8 2021, but it was unlikely the decision would permanently affect Twitter’s ticker — which, at the time of publication, was trading at $47.71.