The Meanings of the Symbols On the One Dollar Bill-Truth!

This email asks you to look at the one dollar bill and explains the various symbols and their meanings.  TruthOrFiction.com has received numerous requests to verify whether the representations in the email are accurate. 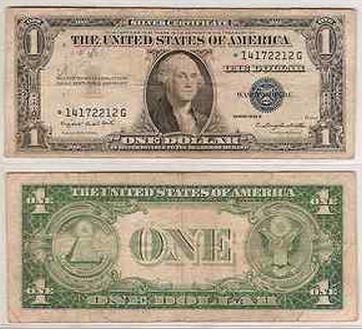 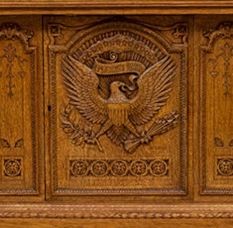 Images left: is the front and back side of a 1935 US Dollar Bill.   Right: is the seal on the Resolute Desk.

eRumor: yet no one knows what the symbols mean.   The Bald Eagle was selected as a symbol for victory for two reasons: first, he is not afraid of a storm; he is strong and he is smart enough to soar above it. Secondly, he wears no material crown. We had just broken from the King of England.

The Truth:
We could not find this particular explanation of the imagery of the eagle in the official records.  Most references to the eagle indicate that it represents something of uniquely American origin.  One of the original design proposals for the Great Seal featured a small crested white eagle, which is not uniquely American.
eRumor: Also, notice the shield is unsupported. This country can now stand on its own.
The Truth:
This is accurate.  Charles Thompson said it denoted that the United State of America ought to rely on their own virtue.
eRumor: At the top of that shield you have a white bar signifying congress, a unifying factor. We were coming together as one nation. In the Eagle’s beak you will read, “E PLURIBUS UNUM”, meaning “one nation from many people.”
The Truth:
Actually, the shield consists of red and white stripes with a blue bar above and which does represent Congress.  The colors are taken from the American flag and officially, the red represents hardiness and valor, the white represents purity and innocence, and the blue, vigilance, perseverance, and justice.
eRumor: Above the Eagle you have thirteen stars representing the thirteen original colonies, and any clouds of misunderstanding rolling away.
The Truth:
The thirteen stars do represent the Colonies.  We could not find anything official about the “clouds of misunderstanding.”
eRumor: Notice what the Eagle holds in his talons. He holds an olive branch and arrows. This country wants peace, but we will never be afraid to fight to preserve peace. The Eagle always wants to face the olive branch, but in time of war, his gaze turns toward the arrows.
The Truth:
The official meaning is that the olive branch and the arrows “denote the power of peace & war.”  As noted above, the design has been with the eagle facing the arrows except for when President Harry Truman turned the face toward the olive branch on the Presidential Seal.

eRumor: They say that the number 13 is an unlucky number. This is almost a worldwide belief. You will usually never see a room numbered 13, or any hotels or motels with a 13th floor But, think about this: 13 original colonies, 13 signers of the Declaration of Independence, 13 stripes on our flag, 13 steps on the Pyramid, 13 letters in the Latin above, 13 letters in “E Pluribus Unum”, 13 stars above the Eagle, 13 plumes of feathers on each span of the Eagle’s wing, 13 bars on that shield, 13 leaves on the olive branch, 13 fruits, and if you look closely, 13 arrows. And for minorities: the 13th Amendment.
The Truth:
The significance of the number 13 in all the symbolism represents the beginning of the country, the 13 colonies.