An email claims that an attached picture of an auto accident was taken by a police photographer. 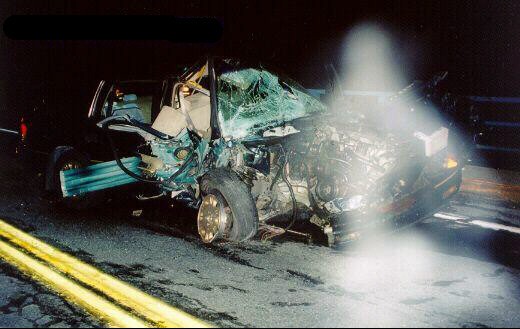 In the picture, there is a shadowy image over the wrecked car.  The writer of the email says the police photographer thought the image might mean he’s having a problem with his camera, so he checked it out and it was okay.  The clear suggestion is that it is a picture of an angel or some other heavenly being.  The writer also claims that the people who were in the wrecked car escaped unharmed…and then asks, “Do you believe in angels?”
The Truth:
TruthOrFiction.com has not been able to find any substantiation for the story.
Pictures like this are circulated on a regular basis and usually turn out to be either a hoax or a picture with mysterious light in it.
This particular picture has been circulated on the Internet for quite a while and is never accompanied by real and convincing information regarding the photographer or the accident.
Note that the email makes vague reference to a car accident and a police photographer, but without names, locations, or dates.
Until we have contact with the source of the picture, we classify it as Unproven!
Last updated 2/21/01